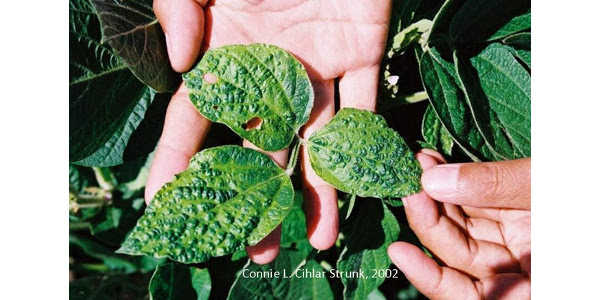 BROOKINGS, S.D. — Fields across South Dakota are dealing with pests this season, according to SDSU Extension staff.

“It doesn’t seem to matter which way we turn or what crop we are scouting, pests are being observed,” said Connie Strunk, SDSU Extension Plant Pathology Field Specialist.

Strunk noted that bean leaf beetles have been found in both soybean and alfalfa fields. She said that with the amount of bean leaf beetles being observed in fields, producers need to also watch for bean pod mottle virus development.

“Symptom severity may lessen during hot weather or with maturity. However, the plant still remains infected with the virus,” Byamukama said.

One effect of delayed maturity is the green stem disorder.

“This is where the stem remains green after the soybean pods have matured,” Byamukama said.

Seed coat mottling – the discoloration of the seed due to a black or brown pigmentation bleeding from the hilum – is another symptom caused by this virus.

Grain with discolored seeds may be docked at the time of sale. Bean pod mottle virus is also associated with increases in fungal seed infection by Phomopsis spp.

He explained that the virus can be obtained with a single bite of an infected plant. “Virus transmission occurs rapidly with the next feeding,” Varenhorst said. “As the beetle moves throughout the field, it spreads the virus to the healthy plants.”

Not only is the beetle an efficient vector, but Varenhorst said it also feeds on the soybean foliage resulting in defoliation.

Later in the season the bean leaf beetles will feed not only on the leaves but also on the soybean pods and are capable of causing yield loss by clipping the pods from the plant prior to harvest.

Adult beetles have a black triangle directly behind their thorax and varying numbers of black spots (can have 0, 2 or 4) on their backs.

“Bean leaf beetles can be difficult to scout for due to their defensive behavior of falling off of plants when disturbed,” Varenhorst said.

If fields are exhibiting large amounts of defoliation Varenhorst said a sweep net can be used to determine if the culprit is bean leaf beetles.

Management
Bean leaf beetles can be managed through insecticide applications which will inhibit the spread of bean pod mottle virus.