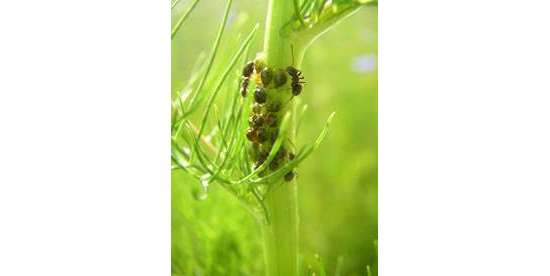 Green aphids with ants guarding them for the honeydew they excrete. (Photo: https://morguefile.com/creative/Mrooczek262)

BELMONT, N.Y. — One of the hardest things for me when the weather turns cold is to let go of my annuals. I mean, these are my babies; I started them from seed early in the spring, nurtured them throughout the summer, saw them flower and fruit and then, with the first hard frost, I have to see them perish. To prevent their demise, I bring into the house as many of them as I can. Obviously, I will not be able to save nasturtiums, squash plants and carrots, but I can bring in some of the potted jalapeño and chili pepper plants, geraniums, some of the coleus, and a few others.

But saving these plants sets up a new problem. I already have a bunch of house plants and there is only so much window space and room for grow lights, and the pots tend to get very crowded on shelves and window sills. Then, too, many of the plants know that this is not the right season for their livelihood and, even though they will not die indoors, they are stressed.  And this is when bugs pounce on their weakened prey.

One day I come into the “plant room” and discover a tell-tale symptom of an insect problem: shiny, sticky honey dew all over the lower leaves and the shelf.  I quickly pull out a hand lens and begin to look at the underside of leaves. Sure enough, I can see tiny green aphid nymphs and adults crawling on the foliage, sucking the juices from tender plant cells. I look closely at another plant and I can see a few mealy bugs on the stems and leaf petioles. Where had these bugs come from all of a sudden? After all, by now, I had the plants in the house for a couple of months.

The idea of “spontaneous generation” of living things appearing out of nothing has been disproved over 150 years ago. So, these bugs had to come from pre-existing bugs that somehow got into the house. The most likely avenues of ingress were pots that weren’t properly cleaned prior to re-use, eggs or larvae in the potting soil, and the plants themselves that already had these insects on them when they were brought into the house. But this last possibility leads to another question: Why didn’t I see the insect infestation when the plants were first moved indoors?

The explanation for that question lies in understanding the growth of populations. The basic pattern of population growth curves applies to all living organisms, from bacteria to maple trees to humans. First, there is a “founding population” of a few individuals that colonize a habitable area (this could be a few bacterial cells in a dish of room-temperature potato salad, or it could be a small number of people arriving at a deserted island, or a few insect eggs or adults on a host plant surface). After establishing themselves in their new environment, the founding members begin to reproduce, and their offspring mature and start new generations. This leads to an exponential growth phase of the population. The increased numbers of individuals use more and more resources and generate larger and larger amounts of waste products. This is the time when I would begin to see the tell-tale signs of insect damage on my plants. The bugs were there all along, but their initial numbers were small and their activities were likely overlooked.

At this point, unless I do something quickly, I will lose many of these infested plants. Already, I may have to discard a few that may be past the point of rehabilitation. I prefer a non-chemical treatment whenever possible. For some insects, like aphids, mealy bugs, or spider mites, I have found a dilute solution of dishwashing soap to be effective, as long as the entire plant leaf surface is covered (easier said than done) and the treatment is repeated several times. Insects are killed as a result of the soap clogging their spiracles, the air holes on the sides of their bodies through which they breathe. The soapy solution can be applied from a spray bottle and the leaves can be rinsed off after a couple of days.

Alternatively, commercially produced insecticidal soaps can be purchased in ready-to-use (RTU) formulations. A number of “organic” insecticides, such as neem extract (from the neem tree) or pyrethrins (made from chrysanthemum plants), or synthetic pesticides (such as imidacloprid) are also available for control of the most often encountered indoor plant pests: aphids, scales, mealybugs and spider mites. Natural or synthetic, these products must be used according to label instructions. The pesticide label is a legal document that details what plant(s), what insect(s), how much of the chemical, and the timing of applications are correct for the product.

It is often said that “an ounce of prevention is worth a pound of cure.” For plants in indoor environments, this means that each type of plant should be placed in its proper light regime, given the right amounts of water and plant “food,” and periodically cleaned and re-potted as needed. Reduced levels of stress will enable plants to fight off or better tolerate their unwanted guests.  As for bringing new plants into the house, quarantine, quarantine, quarantine, is the mantra to make sure that pests are not accidentally introduced into the household in the first place.

We (the plants and I) can hardly wait until we can go back outside in the spring to begin a new season of growth and prosperity.