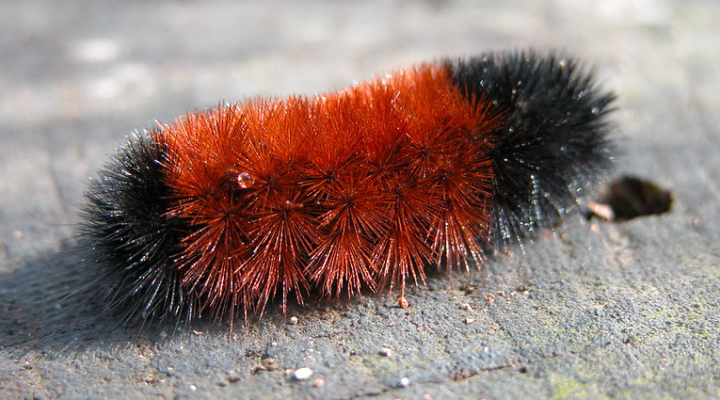 One the biggest rural wives' tales is how the colors of the wooly bear caterpillar (or wooly worm to some people) can predict if we will have a cold winter or a mild winter. (D.Fletcher, Flickr/Creative Commons)

Okay, so Muppets and childhood aside, one the biggest rural wives’ tales is how the colors of the wooly bear caterpillar (or wooly worm to some people) can predict if we will have a cold winter or a mild winter.

Before we get to debunking this old myth, we need to back up a bit. There are several species of caterpillar that are commonly called “wooly worms”. The wooly worms that are at the center of the winter forecasting legend are black at each end with a reddish-brown band in the middle. And it is the width of this orange band that folks say can predict the oncoming winter. Legend says the coming winter will be cold if the woolly bear has a narrow, orange middle band, and the winter will be warm if the band is wide.

So is this myth true? Fortunately, entomologists were also curious if this little fluffy caterpillar could be a seer of winter’s fate. And after several rigorous scientific studies, where they measured the width of the orange band on the caterpillar’s middle and then compared that to the ensuing winter records it was discovered the colors on the caterpillar have no bearing at all on forecasting weather. In other words, the wooly bear cannot predict the severity of the winter.

“But wait,” said the entomologists. The colors of the wooly bear may be an indicator of how long and cold the previous winter had been. All wooly bears start with a body of black hair in the spring. As the year progresses the black hairs start to turn that characteristic reddish-brown in the center. The longer the summer, the more brown hairs, the shorter the summer, the fewer brown hairs. (If you’re wondering, yes, there may be multiple generations per growing season.)

Based on our long, cold winter and what seems like a short autumn in 2019, it makes sense to find many of the wooly bear caterpillars this year are mostly black with narrow bands of brown hair.

This would be a neat classroom science project, but instead of predicting future weather, you can see a record of past weather.

I’m sorry if I deflated your image of the wooly bear caterpillar. Keep in mind these insects never wanted to be weather forecasters, they never even went to school for meteorology! Wocka Wocka!

Good Growing Fact of the Week: Most people know few insects by name. One of the more popular, at least this time of year, is the wooly bear or wooly worm caterpillar. This caterpillar is the larval form of the Isabella Tiger Moth (Pyrrharctia Isabella). A white to orange to yellow moth that frequents lights at night in the midsummer.