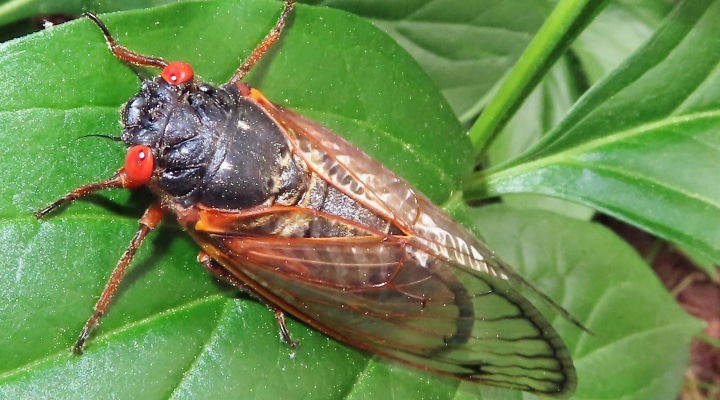 At 17 years old, they have spent their entire lives feeding on deciduous tree roots in the soil below undisturbed patches of hardwood trees. While cycles of 13 and 17-year periodical cicadas pop up throughout the eastern United States in different years, this particular brood is notable as northern Delaware’s most significant in population size and geographic spread. (photo by Martin LaBar, creative commons/flickr.com)

NEWARK, Del. — It’s the roaring twenties again — at least if you live in New Castle County. This summer, residents of northern Delaware will listen to the hip new sound of Brood X, the latest emergence of periodical cicadas that only occurs every 17 years. The last time these cicadas saw the sunlight, Greece hosted the Summer Olympics, Lance Armstrong won his sixth Tour de France title and George W. Bush had not yet secured his bid for a second term as president of the United States.

At 17 years old, they have spent their entire lives feeding on deciduous tree roots in the soil below undisturbed patches of hardwood trees. While cycles of 13 and 17-year periodical cicadas pop up throughout the eastern United States in different years, this particular brood is notable as northern Delaware’s most significant in population size and geographic spread.

“There are other broods in our area that occasionally may be seen. But Brood X is by far the largest and all-encompassing of the county,” explained David Owens, a University of Delaware Cooperative Extension entomology specialist. “They can be so abundant the shed skins form piles under trees.”

The cicadas can be seen (and heard) throughout portions of Pennsylvania, New Jersey, Maryland, West Virginia, Indiana, Ohio, Tennessee and northern Delaware. While there may be some emergence occurring in other parts of Delaware, locations below the canal are less likely to hear the tunes of these particular cicadas.

Like any other public relations-savvy singing ensemble, the Brood X has waited for the opportune moment to make its big debut.

“They send out a text and see if everybody’s ready,” quipped Brian Kunkel, Extension specialist in ornamentals integrated pest management. “Oh, that wasn’t a big thing 17 years ago, I guess, so probably email.”

Cicadas are popping out of the ground, molting, mating and making noise between late May and late June this year. Brood X emerges as soil temperatures reach about 60 degrees Fahrenheit. But experts don’t quite know how the cicadas coordinate this synchronized surfacing.

“We don’t fully understand how they do that,” admitted Owens. “That is still an area of active research.”

Cicadas themselves are not an uncommon sound throughout Delaware. Dog-day cicadas compose a gentle backdrop for our summer months each year. Emerging annually, they are identifiable by their large size and black-ish green and white exoskeletons. In stark contrast, their slightly smaller (yet much louder) Brood X cousins boast striking reddish-orange and black exoskeletons and emerge in much larger numbers.

“These insects come crawling up out of the ground in mass and start clinging to the sides of buildings, fences, whatever and popping out the back of the nymphal skin to become adults,” Kunkel said. “It’s pretty cool to see that massive number of skins everywhere. Just really impressive to see. The first time I saw it was in the eighties and I was very much into fishing and using them for finishing bait…The first time I saw a big, massive group of insects crawling up the trunk of a tree, it was just incredible.”

As if that’s not rock-and-roll enough for you, the Brood X cicadas also use what is known as a tymbal organ to create a 100-decibel sound that the U.S. Centers for Disease Control and Prevention compares to a car horn at 16 feet. Luckily, though, they won’t quite reach the 105 to 110-decibel noise of your typical rock concert. Still, many Delawareans will experience louder cicada songs than usual.

“It is higher pitched, almost a white noise that drowns out conversation,” said Owens. “Some of the Brood X species sound like a buzz saw while others make sound more akin to ‘whooo-ooh.’ ”

Whether you want to simply hear their deafening chorus or to fry them up as a crunchy protein-filled snack (yes, that’s a thing), you’ll need to hurry. Despite spending nearly two decades underground, each cicada will only live above ground for approximately four weeks.

In true rockstar fashion, “they come out and have a three week long party in which they drink plant fluids, mate and lay eggs,” said Kunkel.

As the party comes to a close, the female cicada uses a special serrated body part called the ovipositor to make small cuts into thin tree branches and lays her eggs inside. The average person will only notice this occurrence when small tree branches snap and hang down from the tree — a phenomenon known as “flagging.”

But homeowners don’t necessarily need to worry about their trees. Unless they are recently planted, small or very weak, most trees should sustain only minor cosmetic damage. For trees of concern, homeowners can use netting to cover and prevent female cicadas from accessing the branches. It is unlikely that this process will cause any severe permanent damage to local trees or any damage to crops in New Castle County.

Although they may not sound like the kind of neighbors you would want to move in permanently, Brood X offers us a short glimpse into something incredible — and incredibly fragile.

“They really are a special treasure for the entire planet,” said Owens. “This is the only spot where we have cicadas on a 17 year cycle.”

But land development that reduces valuable woodlands and natural areas could impact the future of Brood X for hundreds of years. Because they only emerge every 17 years, they cannot relocate or replenish their population as easily as other species.

“When we are looking and just marveling at the sheer numbers and quantity of these cicadas, let’s take the time to think about how that landscape will look 17 years from now,” Owens said.

The Brood X emergence is occurring now through the end of June, and you’ll be hearing from them throughout the summer. But when the adults begin to die and their eggs hatch, the new cicadas will drop to the ground, bury into the soil and prepare to complete the 17-year cycle once again, dining on tree roots underground until they emerge to share their latest songs in 2038.

Brood X cicadas may be gone, but the evidence of their passing remains
July 25, 2021