Home » The sounds of biodiversity 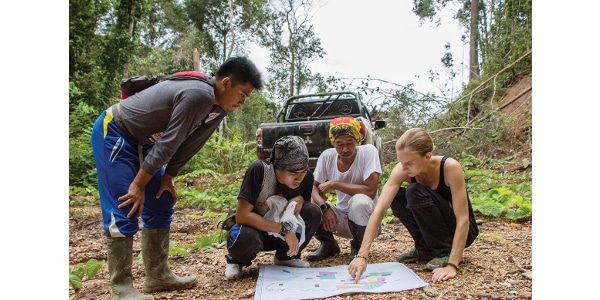 She’s using the methods of this emerging science to better understand biodiversity in tropical forests. “Bioacoustics and soundscape ecology are all about figuring out where biodiversity is and how it’s changing using the sounds that animals make,” says Burivalova, who also has an appointment with the UW Nelson Institute for Environmental Studies. “In a tropical forest, you don’t see many animals, but you can hear a ton. At times you can hear 30 species within a minute.”

The ability to hear biodiversity adds another implement to the conservation biology tool belt. Historically, scientists would visit a forest and count the species they could see, a time-consuming, costly effort that is prone to bias. Motion-detecting cameras, another tool, are great for capturing large animals on the ground but can miss smaller animals and those in the tree canopies.

“Scientists have really started leveraging the idea of bioacoustics as they try to develop ways to monitor biodiversity more cheaply and effectively — and with less bias,” explains Burivalova. “We now have the computing power and data storage to do this work that we didn’t have 10 years ago. Analyzing the data is really interdisciplinary, and I work with computer scientists and engineers to get the most out of it.”

To capture this data, Burivalova visits tropical forests to place recorders that use small memory cards. They can be programmed to record at specific times, such as the morning or evening choruses, when many animals vocalize. They can also be left  in the field over months or seasons to track daily and seasonal changes. Memory cards are then collected, and their recordings are uploaded into an online database for analysis.

“I listen for and analyze how filled up the frequency spectrum is with different kinds of sounds,” says Burivalova. “If you think of an orchestra, you have instruments that play at different frequencies. If, let’s say, the violinists didn’t show up, we would see a gap in the soundscape. For me, those instruments are different species, and I can calculate how saturated the soundscape is at any moment.”

So far, Burivalova has recorded biodiversity in Papua New Guinea and Borneo, and she started a new project in Gabon in September. In Papua New Guinea, she found that even small disturbances in the forests can change the “signatures” of the soundscape.

For instance, she discovered that forest fragmentation, which can be caused by anything from planting a garden to clearing a small patch for a cacao plantation, leads to less vocalization during the dawn and dusk choruses. And after selective logging of single trees in Indonesia, soundscapes became more homogeneous and less saturated at various frequencies compared to untouched forests.

These subtle differences might not be picked up by satellites or other survey methods, and opportunities to take note of them are disappearing.

“My dream project that I’m starting is to collect soundscape baselines from across different tropical forests around the world,” says Burivalova. “We still don’t know how tropical forest animal communities change naturally over days, months, or seasons. And we’re running out of time to collect baselines like this because there are almost no forests that are left untouched. So it’s an important time to be doing this.”

Life of the Christmas tree after Christmas