Home » The Slow and Furtive Nature of Pasture Soil Compaction 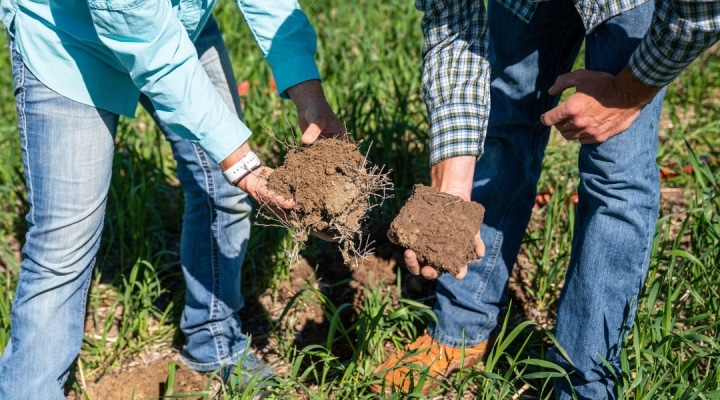 CORTLAND CO., N.Y. — In my work, first as a grazing dairy farmer and now as a Cornell University Cooperative Extension educator working with graziers across New York State, I have been aware of pasture soil compaction but one experience in particular gave me the insight into the slow and furtive nature of compaction in pastures. This article summarizes my findings from a three-year, Northeast Sustainable Agricultural Research and Extension (NESARE)-funded project developed to better understand soil compaction in pastures.

Permanent pastures for livestock can have some of the healthiest soils due to the fact they provide the four principles described by the Natural Resources Conservation Service to achieve a healthy soil: Maximize Soil Cover, Maximize Living Roots Year-round, Maximize Plant and Animal Diversity, and Minimize Soil Disturbance.

One weak spot for some pastures is soil compaction, which is a form of soil disturbance. Soil compaction reduces the spaces between soil particles causing them to become denser. Theoretically, the space in a healthy soil aggregate is made up of 25% air, 25% water, 45% of sand, silt, or clay, and 5% organic matter. When compacted, the soil’s air and water portions are reduced so that biological functions, water retention, and root elongation are reduced.

Once the grazing season arrives, livestock go into the pastures no matter the weather, if the soil is wet its more prone to compaction. Whether the livestock is cows, horses, or small ruminants, the weight of the animal compared to the size of the hoof can exert more compaction than a tractor. This is why in the past; sheep were used to pack an area to create a dam. Even though the animal’s compaction is great it only shows up in the upper portion of the soil where it can be erased in time provided that it’s not repeated. Compaction from the tractor goes deeper into the soil where it is harder to erase. This is more damaging in terms of overall soil health.

Repeating compaction over many years causes a very slow and damaging effect on the functions of the soil and the species that make up your grazing sward, reducing the productivity of your pastures. What I learned from my three-study is that although compaction is unavoidable, a change in management will quickly remedy it.

How This Study Started
As I was working on another SARE-funded study, planting brassicas into fall pastures to improve the nutrient density of the fall swards (https://projects.sare.org/project-reports/one14-197/, I noticed that the soil under the fence in one of our study paddocks was about six inches higher than in the pasture, and the sward under the fence was greener and had only cool season grasses compared to the paddock that also had some weeds and sedges. Knowing that sedges grow in oxygen-limiting soils, I realized that soil compaction was limiting the productivity of this pasture.

The other lesson I learned that day was that compaction was furtive, meaning that it happened slowly over time so the change was hidden from the farmer, who was a good grazier and had farmed there for nearly 20 years, but had not noticed the change in his paddocks.

That day seeded the idea for investigating ways to monitor soil compaction for better pasture management. Since that day, I’ve noticed the evidence of compaction in other pastures and the farmers hadn’t noticed the change probably due to the fact that compaction is compounded over many years. Productivity is reduced when compaction is left for many years. Plants that can live in compacted soils are not as productive due to shallow roots and are often not palatable to the livestock.

The SARE study revealed that soil compaction will dissipate within months if management changes and has provided a basis for developing those changes to enhance pasture productivity.

Testing a PCR Hypothesis for Pasture Monitoring
To measure soil compaction, the penetrometer is a readily available tool. When pushed into the soil, it measures the soil’s resistance. Its meter indicates the pounds per square inch (PSI) of resistance at the tip. The limitation of the penetrometer reading is that the resistance is highly affected by the changing moisture of the soil. A soil will have more or less resistance on different days as the soil dries out or becomes damp. This has precluded the penetrometer from being a reliable monitoring tool.

I decided to develop a ratio representing the unique conditions of pastures where the soil is impacted by grazing animals but the pastures’ fenceline is not impacted by animal or machine-based compaction to determine if such a monitoring technique could be helpful. Monitoring with this Pasture Compaction Ratio (PCR) would look for any change between the optimum compaction area (fenceline) and the compacted area (pasture).

To test my PCR hypothesis, I selected a 35-acre pasture continuously overgrazed by 40-60 beef animals. As expected in overgrazed pastures, there is increased traffic by the animals as they get only small bites from the sward that consisted of mostly bluegrass, Dutch clover and other forbs. The increased traffic leads to increased compaction. Due to the declining productivity of the pasture, the animals in the trial pasture mostly relied on stored hay brought into the pasture.

How to Compute the Pasture Compaction Ratio (PCR)
Using a Penetrometer collect five readings (lbs./sq. inch) of the top six inches of the pasture; these are averaged to determine Pasture Resistance.

Divide the Pasture Resistance number by the average of five readings collected under the fenceline to determine Fenceline Resistance.

In November of 2019, I installed an enclosure, a ten-foot by ten-foot square in the pasture that excluded animal traffic. To mimic hay production within the enclosure, I cut the area to a four-inch height twice during the season. In 2019 and 2020, I took penetrometer readings of the enclosure and divided them into the fenceline readings to arrive at the enclosure’s PCR (Figure 1). I continued to do the same for the pasture PCR.

• The pasture PCRs for 2019 and 2020 are similar which would be expected since no management changes happened.

• In April the PCRs for both the pasture and enclosure in 2019 and 2020 start out the same. The rising pasture PCR after May of 2020 indicates that the pasture’s compaction resistance is improving since the PCR is moving closer to the fenceline’s compaction PCR which peaked at 1.0.

• The separation of the 2020 PCRs for the pasture and the enclosure is an indication that the use of the PCR is capable of monitoring management changes. The switch to hay production only within the enclosure reduced the compaction of the soil.

The most interesting takeaway from this study for me was how quickly the shallow compaction in the pastures dissipated. The real damage was caused in pastures where the management didn’t change and the years of compaction reduced the function of the soil so that it changed the grazing sward to less productive species.

Obviously, much more study is needed to better understand the usefulness of using a ratio between two soil management areas as a monitoring technique. This project raised more questions to be addressed before a PCR can be a reliable tool. Developing a way to monitor soil compaction with a readily available tool such as the penetrometer would provide a great advantage to farmers and advisors who seek to improve the function and health of agricultural soils. To learn more about the technical details of the PCR study, see https://scnydfc.cce.cornell.edu/submission.php?id=1477&crumb=soil|7.

As mentioned earlier, compaction in pasture soil is unavoidable. Some immediate suggestions for reducing compaction on your pasture and grazing lands, include: