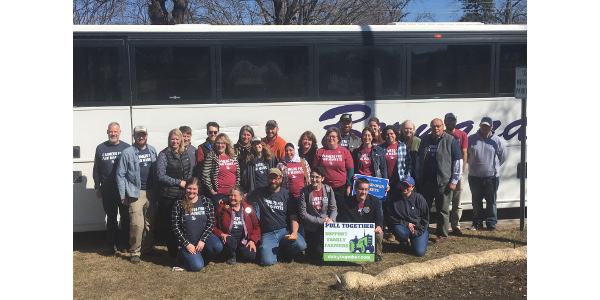 STORM LAKE, Iowa — “When family farms prosper, everyone prospers.” Scribed on the back of their shirts, that was the message that Wisconsin Farmers Union (WFU) members carried to the inaugural Heartland Forum in Iowa on March 30.

The event drew hundreds of rural advocates and a slate of presidential hopefuls to the Midwest, where candidates painted a picture of the potential for vibrant rural communities and viable family farms. Thirty WFU members made the trek, boarding a bus in the early hours of the morning to make the six-hour journey to Storm Lake and add their voices to the chorus of farmers calling for antitrust enforcement and rights for family farms.

Sarah Lloyd, Wisconsin Dells dairy farmer and WFU special projects coordinator, was among the line-up of speakers who gave a round of inspiring speeches at a Farmer Bill of Rights Rally preceding the forum. Lloyd’s family milks 350 cows on the farm, which has been in her husband’s family, the Nelsons, for more than a century. She worries it will not endure another year of depressed dairy prices.

“I’m tired of being told as a farmer that I need to tighten my belt a little more and be a better business person when the consolidated market is the problem,” Lloyd said, followed by thunderous applause. “It’s so important that we are here in Iowa talking about antitrust.”

The rally celebrated the Farmers Bill of Rights, recently put forward by Family Farm Action, which calls for the rights to fair and open markets, to feed our community, to fair capital, to protect our natural resources, to local control of our land, to food security, to repair equipment, to transparent labeling, and to rural opportunity.

“We’re fed up with corporations extracting wealth from rural America,” said Family Farm Action board member Wes Shoemyer. “We need action, and we need it now – actually we needed it 15 years ago.” The Missouri farmer has sold hogs at poorer prices than his grandfather did back in the Great Depression.

“Farmers are being squeezed from both ends,” echoed National Farmers Union Vice President Patty Edelburg, a dairy farmer from Scandinavia, Wis. “We need our leaders to stand up and stand strong in the face of corporate interests.”

Sen. Elizabeth Warren, who attended the pre-event rally, endorsed the Farmers Bill of Rights and vowed to fight enforce antitrust laws. “We need to block foreign ownership of our farmland,” Sen. Warren said. “Foreign governments control an area that is the size of, if all put together, the state of Virginia. That is a threat not only to our farmers, but also to our national security.” The rally also included recorded video statements from candidates Beto O’Rourke and Cory Booker.

Iowa Farmers Union President Aaron Lehman welcomed folks to the Heartland Forum and introduced some of the topics of the day – among them consolidation, conservation, and rural vitality. He noted that “Farmers aren’t just dealing with these problems; farmers are the solution to these problems.”

“A generation ago, 37 cents out of every food dollar went into the farmers’ pockets; now it’s 15 cents,” Sen. Warren said, noting that farm income has also been slashed in half in recent years and farmer suicides are on the rise. “We have to treat this crisis seriously. We’ve got to start fighting against corporations.”

Castro highlighted the need for the U.S. to make investments in its people, public schools, community hospitals and common-sense immigration reform, while also vowing, “I would appoint people to the EPA who actually believe in environmental protection.”

Sen. Klobuchar pointed to the deeply consolidated seed and agrochemical industries and vowed to “look at monopolies and mergers not just going forward, but looking backward.” She added, “We are now entering a new gilded age and we need to take on the power of those monopolies.”

“I believe in the power of investing in other people,” Delaney said, as he called for universal health care, comprehensive immigration reform, and changes to education funding. “I want a resurgence in our communities.”

Congressman Tim Ryan said he sees a “chronic level of stress because of chronic uncertainty” in rural America, heightened by hospitals closing, the growing opioid epidemic and a lack of school funding, among other issues. But he also pointed out opportunities in renewable energy, coalition building and entrepreneurial endeavors. “The government has to be more creative, more imaginative,” Ryan said. “There’s opportunities in wind and solar … we’ve got to drive the investment into distressed communities in rural America.”

Mariann Holm, a Farmers Union member from Elk Mound, Wis., didn’t flinch at waking at 2:30am to catch the bus to Storm Lake. “I recognize the importance and the weight of this antitrust issue. Something has to happen. It’s worth the time to see if we can get this issue on the minds and hearts of people across the country.”

Kriss Marion owns Circle M Market Farm, a picturesque farm on the outskirts of Blanchardville, Wis. Last fall, she made a run for State Senate, elevating many of the issues impacting her rural neighbors. She was drawn to the forum out of a curiosity to hear what ideas the candidates might have for helping rural communities like her own. “It’s important that these candidates come to rural states. I think there’s no substitute for actually talking to people on the ground, spending time with farmers and seeing what it’s like out here – getting your mind around the fact that in spite of the numbers, there has been no economic recovery in rural places. In fact we’ve slid backwards, kind of precipitously.”

Marion said she hopes to see candidates travel to Wisconsin, a state that forum moderator Art Cullen stressed will be pivotal in the 2020 election and a place where candidates will have to address the elephant in the room – the ongoing dairy crisis that is putting hundreds of family farms out of business each year.

Boyceville farmer Sarah Paquette’s concerns over lack of antitrust enforcement run beyond concerns over the loss of family farms to those of jeopardized national food security and a loss of vital farming knowledge. “What happens when, with further consolidation, the knowledge of farming becomes whittled down to very few people that even know what to do?” Paquette questioned. “Every farmer that goes out of business is expertise that is potentially lost to the next generation.”

Holm agreed, noting, “I see the whole farm community is a real delicate web. It’s beautiful but it’s fragile. Every farm that goes out of business … it’s just such a drain of our intellectual property and that knowledge base and wisdom.”

In a previous chapter of his life, Nik Novak was an educator, but in the past decade, he’s become the student, learning from family farmers and studying the impact local food can have on a region in his roles as storekeeper at Just Local Food Cooperative in Eau Claire and a farm hand at Deutsch Family Farm near Osseo, where he’s learned to focus on a triple-bottom line of profit for the land, profit for the people, profit for communities.

He encourages folks who are concerned about the direction mainstream agriculture is headed in to become a local food patriot by either buying local or growing their own food. “Local food equals national security,” he noted.

“While our food system is being taken over by large, monopolized corporations, Wisconsin Farmers Union is hard at work fighting for family farmers, citizens and neighbors,” Novak said. “We believe in antitrust enforcement, conserving our land and establishing fair markets.”

Rolling back northward on the bus home, the day’s discussions seemed to be reaffirmed by the sight of fields upon fields of corn and soybeans. Tucked in amid clumps of trees along the interstate are weathered and dilapidated old barns, abandoned over the years as Midwestern farmers shifted from self-sufficient farmsteads into the monocropping that would earn them the title of the Corn Belt.

“The rally and forum demonstrated the importance of farm country and rural communities to a national audience,” said WFU Executive Director Julie Bomar. “I just hope that as the presidential campaigns ramp up all contenders will realize they need rural America and we need the rest of the country to move forward. I’m also hoping for an awesome display of farm and food activism this next political season. I believe we saw the beginnings of that here in Storm Lake.”

How to make conservation practical and profitable
January 26, 2020