Home » The ride of his life 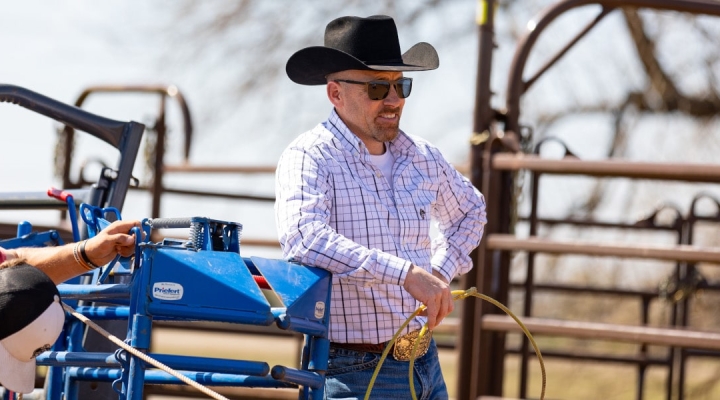 STILLWATER, Okla. — Rodeo has played an integral role in the life of OSU Rodeo head coach Cody Hollingsworth. Growing up, he participated in rodeos, competed on collegiate teams and rodeoed professionally. Hollingsworth rode bulls for OSU Rodeo and Colorado State University. His love for Stillwater brought him and his wife, Katie, back to Stillwater where they owned and operated a marketing company specializing in the rodeo and western industry. Ten years ago, he accepted the head coach position at OSU and hasn’t looked back.

Hollingsworth’s favorite part about OSU Rodeo is the close-knit culture the team has created.

“The OSU family feel reverberates through the entire university and into our rodeo team as well,” Hollingsworth said.

As head coach, Hollingsworth creates an environment of support and togetherness and instills the importance of teamwork into his athletes at every practice. In the competitive world of rodeo athletes, he attributes the team’s success to their willingness to help each other.

“Our team is truly excited to see all members do well,” Hollingsworth said.

The team has seen tremendous growth since Hollingsworth began as head coach. When he first took over, the team had 15 members. The team roster now consistently hovers around 50 students. Despite the increase in members, Hollingsworth prioritizes creating a family atmosphere and supportive culture.

Hollingsworth believes building a consistent team combined with the support from the Ferguson College of Agriculture contributes to the increase in team numbers, he said. The facilities, scholarships and resources available to OSU Rodeo have helped give the team a solid foundation for success.

Hollingsworth describes his relationship with his team members as unique.

“I help them through a lot of different aspects of their lives,” Hollingsworth said. “We talk about their classes, where they’re at academically, how to study for tests and complete large projects, as well as working hard and getting better in the arena to achieve their goals there. It’s a different relationship than what professors or advisors may have, but I love it.”

This unique relationship brings the team together in its achievements, but it also comforts members in hardships, as well.

Hollingsworth’s connection with his athletes helped both the coach and team endure two separate tragedies over the past two years. The deaths of team members Rowdy Swanson and Lariat Larner in 2020 and 2021, respectively, deeply impacted OSU Rodeo, but it also brought team members closer together.

“The past two years have been very tough,” Hollingsworth said. “Rowdy and Lariat were both a big part of our team and are missed every day.”

Hollingsworth said he was proud to see the way his team banded together to support one another through the tragedies. He added the team found strength through this support to press on through competition.

“Rowdy’s and Lariat’s legacies will continue to have an impact on our team and students for years to come,” he said.

The bond that Hollingsworth has fostered with team members through tragedy and triumph impacts their actions beyond team practices and competitions.

“Coach is more than just a coach around here – he’s a mentor,” said Kyle Humphrey, a senior member of OSU Rodeo from Van Alstyne, Texas. “He always makes sure we’re not only making our grades but also succeeding in and out of the arena.”

Humphrey’s relationship with Hollingsworth has played an important role in his college experience. He feels supported knowing someone is always there for him, no matter what. Humphrey said Hollingsworth has been there for him through the highs of success in the rodeo arena, the lows of injury and everything in between.

“I’d tell coach thank you for everything he’s done,” Kyle said. “Thank you for helping me through and always supporting everyone on the rodeo team and being there when we need him the most.”

Hollingsworth said the most rewarding part of his role as a coach is watching students develop and grow to be successful. Watching a student come in as a freshman and work hard, improve and have success at the collegiate level is one of his favorite parts of coaching.

However, his measure of success for his students extends beyond the gates of the rodeo arena.

“Being able to see these students come through the program and go on to graduation and do great things professionally in their career is really rewarding,” Hollingsworth said.

As Hollingsworth begins his next decade as head coach, he reflects on the pride he has in his students and the enjoyment he gets out of working with them while looking forward to the excitement of building a consistent team and sustaining the success of OSU Rodeo for years to come.