Home » The quest for a perfect food 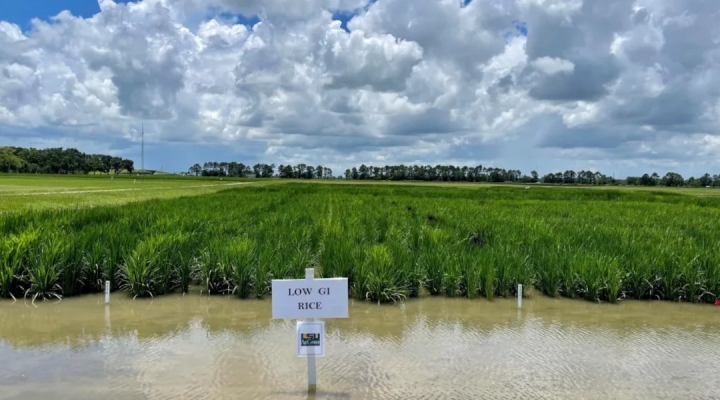 Dr. Utomo inspecting preliminary yield trial plots at one of the research sites in Louisiana. A team there developed a new variety of rice that has a low glycemic index and is high protein. (Photo credit: Ida Wenefrida)

WASHINGTON — Some perceive rice as a “bad” source of carbohydrates. That’s because most varieties of rice have a high glycemic index. This makes rice less favorable to people with diabetes as well as in supporting obesity prevention or weight loss programs. The June 23rd, 2022 Sustainable, Secure Food Blog explains how rice breeders in Louisiana developed a new low glycemic index, high protein rice.

According to blogger Herry Utomo, he and colleague Ida Wenefrida and their teams at Louisiana State University have been working on breeding a rice that is higher in protein – and has a lower glycemic index for many years.

The first of its kind anywhere in the world, this new variety – ‘Frontière,’ is a rice superstar. It has the lowest glycemic index* for any rice. It has 53% more protein than regular rice. Its low GI property allow people with prediabetes or diabetes to eat rice safely. The increase in protein content provides additional lean protein and improves overall rice’s nutritional profile.

In addition to the 750 million people suffering malnutrition, there are more than 260 million rice-eating people worldwide are affected by diabetes. Providing low glycemic rice that can reach into a great portion of these people from diverse cultures with different rice eating preferences is truly monumental challenges. The low glycemic index, high protein rice that enters the U.S. markets this year perhaps can be used as an initial step to meet these great challenges. Frontière is sold commercially as “Parish Rice” and “Cahokia Rice.” It is currently being grown on farms in Illinois and Louisiana.

How this new variety was bred

The pursuit for perfect rice started with 7 years of research using traditional mutational breeding techniques. This helped us to acquire new genetic capabilities for the two traits of low glycemic index and higher protein. Both traits are rarely expressed in natural rice populations.

Retaining the premium standards for grain qualities for the U.S. long grain rice was another important consideration while carrying out the process.

To provide a strong genetic foundation, rice cultivar Cypress was selected as a parental line in the mutational breeding. Cypress is well known for its high milling quality with a capability to maintain high whole-grain milling yields at lower harvest moisture across different environments. This provides a great genetic source for an ideal grain quality consistency.

Mutation breeding has been studied by scientists for almost 90 years in plants. It has been used to induce mutations associated with favorable traits in plants. Seeds are treated with X-rays, gamma rays, or chemicals in low doses, and then the next generations are measured for the best qualities. We used the chemical ethyl methane sulfonate on Cypress to breed new varieties. This chemical creates conditions that allow for faster mutations in plants, which speeds up the breeding process. All traces of chemicals are removed, and no residual remains in or on the plants.

The early generations of mutated materials exhibited an array of phenotypic variability. Some were sterile or grew less vigorously. Others grew to less desirable heights and had low yields. After years of extensive selections and purifications, various undesirable variabilities were successfully removed.

The successful variety was finally released as cultivar ‘Frontière’ in 2017. Phenotypically, Frontière is very similar to Cypress. It consistently performs well in diverse rice growing environments like the Southern and Midwest US and Puerto Rico. Our team used conventional mutational breeding to acquire these exceptional characteristics to express naturally on its own. This new rice is not transgenic (non-GMO).

Next on the pipeline

To serve more diverse market needs, we are now breeding other cultivars for low glycemic index and high protein. Two advanced lines are in the pipeline for releases. One long grain and one medium grain were developed for southern U.S. rice growing regions. Another medium grain rice for California is also in development. A specific selection index with three key determinants is used for low glycemic index selections in parallel to high protein screening.

NNGA/CGA to hold hybrid conference on nut trees in August