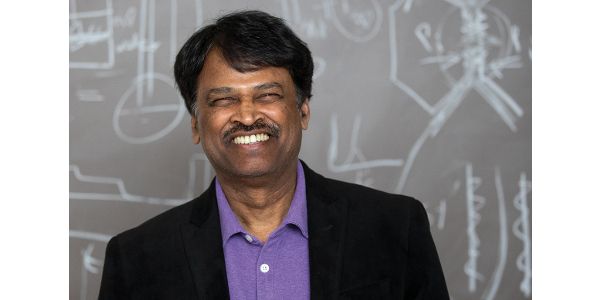 Srinivasan Damordaran, the Owen R. Fennema Professor in Food Chemistry at CALS, has made a career of engineering proteins to solve food and nonfood problems. (Photos by Michael P. King)

MADISON — Srinivasan Damodaran came to the United States in 1976 from South India, where the green revolution was fueling an explosion of wheat and rice production — a welcome development in a country with a long history of hunger problems. He will never forget the long food lines of his childhood in the 60s and 70s.

“You could not buy rice in the markets, or the price was exorbitant,” says Damodaran, now the Owen R. Fennema Professor in Food Chemistry at CALS. “I’d go to the public distribution system in the morning and stand and wait my turn. They would give out only five kilograms of rice at a time. This left an impression.”

India was chronically short of food during much of the 20th century. Outright famines were headline material in neighboring Bangladesh in 1972–73 and later in West Africa, Ethiopia, and Sudan, among many other nations.

Although India was becoming self-sufficient in food production with the help of superior seeds, fertilizer, and pesticides, Damodaran still felt there was plenty he could do to help. He decided to enter a Ph.D. program in food chemistry at Cornell University. To introduce himself, he wrote a long proposal for easing malnutrition by growing yeast for protein.

After Cornell, he came to UW–Madison to join the Department of Food Science. “This is my first job,” he says. “I came here in 1984 and stayed forever.”

Among his four siblings, Damodaran says he is “the loner” who came to the United States. “They asked why I was going, and I said there was no scope to do the kind of research I wanted in India.” Every couple of years, he returns to his home country and marvels that it now exports rice. He’s also astonished by its ongoing “white revolution” — a surge in dairy production that is part of a broad range of technological progress in the world’s largest and most astonishingly diverse democracy.

Quick to smile and unhurried in conversation, Damodaran (who usually goes by Damo) is married to Meera, an architect recently retired from UW–Madison’s Division of Facilities Planning and Management. The couple have two daughters, both physicians. For entertainment, he says, “I like to do handyman jobs. Building out the basement, all sorts of work — electrical, plumbing, everything but drywall. Fixing things is my real hobby.”

Suitably, Damodaran has made his name in fixing proteins. If you have a protein that needs a bit of engineering, he just may be your man. His various alikeinventions include a process for the efficient removal of phospholipids (the chemicals that oxidize into an off-flavor in soy foods) and plant-based super-absorbents for industrial cleanups and diapers. He has also patented a technique (along with fellow food science professor John Lucey and research associate Dani Zhu) for making protein-polysaccharide complexes that allow all the protein to stay absorbed in solution — a surprisingly difficult task.

According to Lucey, Damodaran’s productivity rests on “an amazing depth to his understanding of the basic nature of the interactions that govern protein structures, and he has combined that ability with an intellectual curiosity that allows him to derive innovative approaches to test these ideas.

“He is considered one of the world’s leading food chemists,” Lucey continues. “He is versatile and can apply his basic skills to a wide range of topics, which has allowed him to move into different areas over the course of his long career.”

Damodaran’s skills prove invaluable in the study of proteins because, as Lucey explains, they are a vitally important component in most foods and also highly varied. “They impact the nutrition and texture of many food products, such as yogurt, meat, bread, and cheese,” Lucey says. “Knowledge of the chemistry of the amino acids and how they interact to create protein structures are the keys to unlocking the complex behavior of protein in food products.”

Milking Milk’s Potential
Proteins can cause trouble, too. They’re one of the components that make milk such a desirable food, but they can also spark allergies in up to 5% of children ages 6 months to 5 years. The bad news can arrive when the first bottle of cow’s milk triggers symptoms ranging from a skin rash to life-threatening shock. Infant formula manufacturers have countered the threat by taking milk protein apart through a process known as hydrolysis. This leaves a bitter concoction of isolated amino acids — the building blocks of proteins — whose taste must be masked with sugars and flavoring.

In 2018, Damodaran disclosed his solution to milk allergy (not to be confused with lactose intolerance) to the Wisconsin Alumni Research Foundation (WARF). He avoids the conventional practice — dicing the long strings of amino acids — and instead cuts them into medium-size pieces using an enzyme. He then cross-links them back into a large polymer. This neopolymer is not recognized by the immune system, so it does not trigger an allergic reaction.

The disassembly relies on an enzyme used to make the artificial sweetener aspartame, and reassembly is done by an enzyme used in making surimi, a crab meat substitute made from minced fish. Based on these products’ long record of use, Damodaran’s neopolymer can be labeled “generally recognized as safe,” or “GRAS.” GRAS is a Holy Grail for food and industrial products because products with this classification are assumed to be nontoxic without expensive testing.

Milk protein contains every amino acid that people need, and Damodaran’s engineered proteins, just like regular milk protein, are broken down in the small intestine into individual amino acids. After these amino acids move through the bloodstream and into cells, they combine to build human proteins.

‘Green’ Glue
Damodaran’s expertise on soy protein led him beyond edible territory when, in 2016, he received a request to help develop a replacement for the urea formaldehyde glues that bond plywood, particle board, cabinets, and furniture. Over the years, the multiple health impacts of airborne formaldehyde prompted first California, and then the U.S. Environmental Protection Agency, to restrict this widely used adhesive.

The formaldehyde glues are cheap and effective, so the restrictions naturally increased the demand for an affordable replacement that is just as good at bonding wood sheets and fragments — but without toxic “off-gassing.” The U.S. Forest Products Laboratory in Madison was interested in improving existing soy-based adhesives that, although strong, were not as strong as their formaldehyde counterparts and failed after absorbing moisture from the air.

To meet California’s standards and improve the glue’s environmental profile, Damodaran chose to avoid petrochemicals, focusing instead on inorganic chemistry. He settled on a chemical process called phosphorylation, which improves attachment to the cellulose in wood. “The solution was almost too easy,” Damodaran says. “It took us two or three months to demonstrate, though the optimization took much longer.”

In 2016, Damodaran and Zhu were awarded a WARF patent for a soy-based glue that has now been licensed by California-based Specialty Organics, Inc., as part of an effort to commercialize a new soy protein–based adhesive. According to vice president and chemical engineer James Seruto, the company is working to obtain manufacturing approval from the EPA, and he expects to start sampling the “green” adhesive with the copyrighted name BreezeBond to wood panel manufacturers this year.

Protein Matrimony
To Damodaran, green glue is good, but it’s a detour from his passion: sculpting proteins for human consumption. His memories from growing up in a hungry country feed directly into his latest —and likely last —project in his Babcock Hall lab. He’s attempting to “marry” proteins to each other, or to various food polymers, to create new food ingredients and take advantage of the vast wealth of plant protein in soybeans.

One promising approach is tying soy protein to milk protein, which can be whipped into appealing, frothy confections — think whipped cream, eggnog, or ice cream. Someday — and there has already been progress in this regard — he hopes to make hybrid proteins that bring the best of both worlds.

In these efforts, Damodaran is aided by postdoctoral researcher Nilushni Sivapragasm. She is working on a USDA-funded project to develop new protein combinations for beverages. The research, she says, is the perfect preparation for her plan to pursue a career in food industry research and development. And Damodaran is just the kind of mentor she was looking for.

“I used a book he co-authored as my Bible for my master’s thesis,” Sivapragasm says. “And I’ve always wanted to work with the writers.”

Damodaran says his and Sivapragasm’s attempt to improve what scientists call the “function” of protein rests on how molecular structure affects taste, cooking, and storage. “Structure and function — that’s always been my career,” he says.

“Soy is very cheap,” he adds, “and we’re aiming at new ingredients that will be less expensive than milk protein. If we succeed, it will open a lot of possibilities for using improved plant proteins safely.”

A second possibility is bonding non-milk protein molecules to soy protein. “If you give a poor man, even if he’s very hungry, soy protein powder, he is not going to eat it, even though we know that it’s good enough for survival,” Damodaran says. “But we all want tasty, appealing food, and one of the simplest, most effective tactics is to attach molecules, like polysaccharides or hydrocolloids, to soy protein to transform it to a better protein ingredient.”

It’s a difficult puzzle, but one that Damodaran is poised to solve, according to his former graduate student, Akshay Arora PhD’08. “Dr. Damodaran was working on proteins long before they became popular in the mainstream,” says Arora, who leads the development of plant protein ingredients and technologies at Igredion, a New Jersey–based ingredient manufacturer. “What distinguishes him as a researcher in this field is his ability to think deeply and connect the dots from fundamental sciences to solve complex problems. His research has shed light on how proteins behave and how this knowledge can be harnessed in food and biological systems.”

As a food chemist, Damodaran sees his job as framing the building and inviting others in to install the plumbing, wiring, and countertops. “If you demonstrate something, get the proof of principle, then you can move on,” he says. “With soy glue, for example, I wanted to demonstrate a chemistry with very desirable functions and walk away. Others can apply it to various proteins from different sources, based on this particular technique. But at that point, when it becomes mundane, I’ve done my job.”