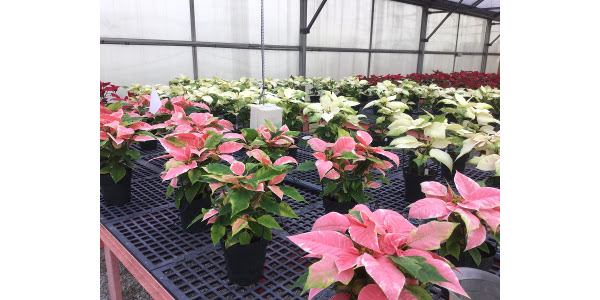 GREELEY, Colo. — Did you know that December 12th is National Poinsettia Day? This holiday was set forth to honor the first United States Ambassador to Mexico, Joel Roberts Poinsett, who served in this role during the Madison presidency from 1825 to 1829. Poinsett had a love for botany and brought the plant from Mexico to his home greenhouses in South Carolina to propagate and share with others in the region. The first poinsettia plant (Euphorbia pulcherrima) was sold with it’s new name of ‘Poinsettia’ around the mid 1830’s.

The poinsettia has long been equated with the Christmas season, just not as a consumer product like it is today. There is an old Mexican tale of a girl named Pepita that collected a bouquet of weeds to use as a gift because she did not have the means to get something more elaborate. She placed the weeds next to the nativity scene during the Christmas Eve services and they miraculously turned into beautiful and vibrant red blooms. Ever since that night, the flowers have been known as Flores de Noche Buena or Christmas Eve flowers.

To some, displaying poinsettias may seem like an old-fashioned way to deck your halls for the holidays, but it’s a fairly new tradition to see in homes across America. Furthermore, although poinsettias are native to Mexico, the popularity of the plant and a new ‘budding’ industry actually started right here in the United States just around a century ago by Paul Ecke Sr., a German immigrant whose family settled in Los Angeles California around the turn of the century. Even though the farm mainly produced milk and fruit, they looked at growing the Poinsettia to make some extra cash in the early winter when other flowers weren’t blooming. They peddled the vibrant red flowers from a roadside stand and convinced other growers in the area to also turn a profit by growing the plant as well using Ecke’s stock plants.

In the mid-1920’s, the Ecke Farm was moved south to Encinitas because the movie industry began booming in the Los Angeles area. The business really took off after World War II, as air freight began to gain in popularity and they switched their product from stock plants to cuttings that could then be shipped all over in a short period of time. Then in the 1960’s, Paul Ecke Jr. began taking advantage of their Hollywood neighbors and began marketing their flowers to be used on the sets of many popular TV shows. It wasn’t long before the craze swept the nation and Americans began to really associate the flower with celebrating the holiday season.

In later years, as poinsettia plants were grown worldwide, Ecke moved their production operation to the ideal climate of Guatemala to remain competitive with the global poinsettia market (the original Ecke Ranch still exists in Encinitas and acts as their research and development center).

The Ecke family’s poinsettia operation at one time produced about 70% of all the poinsettias purchased in the United States and 50% worldwide. After three generations, the Ecke family sold the business to a Dutch company but retained the Ecke name and most of the staff in the process. When horticulturalists today think about poinsettias, Ecke is still the name that comes to mind.

Today, tens of millions of poinsettias are sold each year to help people around the world ring in the holiday season with hundreds of different varieties from which to choose, but red remains the standard.

To learn more about caring for your own poinsettia plants this holiday season, check out Colorado State University’s fact sheet on Poinsettias HERE.

Selecting and caring for your poinsettia
December 12, 2019