Home » The ‘nuts and bolts’ of pecans 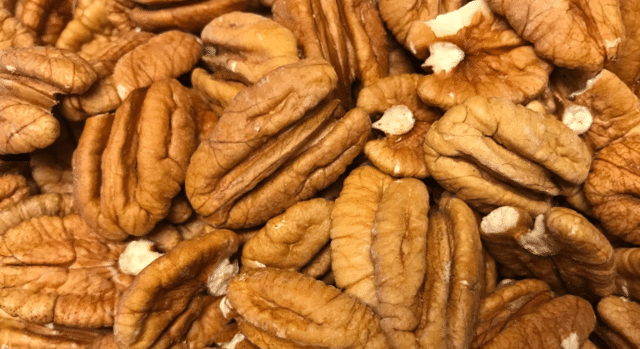 Pecans have healthy fat and are a source of protein, fiber and vitamins. (Texas A&M AgriLife Extension Service photo)

COLLEGE STATION, Texas — With the ongoing pandemic, more at-home cooking activity and consumer interest in healthy snacking on the rise, pecans have continued to grow in popularity as both a holiday and everyday food.

“Pecans are full of fat, but it’s the good kind of fat,” said Larry Stein, Ph.D., Texas A&M AgriLife Extension Service horticulturist and associate head of the Department of Horticultural Sciences. “They have the healthy mono- and polyunsaturated fats that can help lower cholesterol levels and help prevent heart disease. They are also a good source of protein, fiber, selenium and vitamins A and E.”

Stein, who is based at the Texas A&M AgriLife Research and Extension Center in Uvalde, said small portions can curb hunger, provide an energy boost and help lower bad cholesterol. However, pecans, like other nuts, are high in calories, so it’s best not to overindulge.

“Ideally, you should consume about an ounce or about 20 pecan halves a day, which amounts to about 200 calories,” Stein said.

Stein said the U.S. Department of Agriculture breeding program has done excellent work in improving pecan cultivars, with a few of their successes being the Wichita and Cheyenne varieties. These two cultivars are the mainstay for the commercial industry in Central and South Texas.

Initially pecans were bred for size, and resulted in large varieties such as Choctaw, Mohawk and Kiowa. However, as these trees age, the nuts tend not to fill as well and so emphasis has shifted from size to earlier-filling, smaller nuts. This resulted in the release of Pawnee, Kanza, Waco and Nacono varieties.

Stein said of all named cultivars to date, one of those with the best eating quality is the Sioux, which is a cross of Schley and Carmichael varieties.

“Sioux also makes a gorgeous tree, which requires little training and is recommended as one of the best homeowner trees to grow,” he said.

Stein said what many people don’t realize is there are hundreds if not thousands of varieties among the native pecan trees that grow along the rivers and creeks.

Stein said certain varieties grow better in some areas of the state, and some are prone to certain insect or disease pressures that may affect nut quality.

“While pecan choice due to flavor is subjective and many pecans are not marketed by variety, some consumers still have a preference for particular types of pecans and will seek them out at harvest time,” Stein said. “One such variety is Cheyenne. Others prefer the rich taste of native pecans, but most native pecans are quite small with a very hard shell. There are still some very good native pecans; you just have to look for them.”

The best time to buy pecans

Monte Nesbitt, Ph.D., AgriLife Extension program specialist in horticulture, Bryan-College Station, said sometimes pecan kernels sold at the beginning of the holiday season can be “holdovers” from a previous harvest.

“Older good quality pecans stored properly can actually be better than poor quality pecans from the current crop. But consumers have a perceived freshness bias for buying pecans from the current year’s crop,” Nesbitt said. “Over time, the oil in pecans can oxidize and the flavor and quality of the nut can diminish, so make sure kernels are a light, bright golden color.”

He said except in a few cases where a variety has a naturally darker kernel color tone, brown kernel color tends to indicate rancidity, improper storage or possibly that they came from a stressed pecan tree.

“If possible, ask to taste the pecans before you buy them to see if they meet your quality and taste expectations,” Nesbitt said.

“Retail stores often store their shelled pecans at room temperature, plus it’s difficult to know just how long they have been on the shelf,” he said. “Packaging of shelled pecans matters, and most packaged kernels have about a three-month window for adequate freshness when kept at room temperature. Freshness is important for pecans to look and taste their best, so consumers should buy pecans from a supplier they know and can depend on.”

Squirreling away pecans for future use

Moisture is the enemy when storing pecans. Upon harvest, pecans usually have a higher moisture content than is needed for storage. Over time, high moisture content can possibly lead to mold, discoloration and a breakdown of oil.

According to Nesbitt, at first maturity pecan nut meats can have from 15% to 20% moisture or more.

“Pecans dry naturally when they are exposed to air and sunshine, but field conditions may prevent them from drying to the ideal moisture percentage, which is about 6%,” he said. “Kernels that do not snap and break when bent with force, but bend or have a rubbery texture are not adequately dried. They will not be palatable to eat, are subject to mold growth and will not have as long a storage life.”

Shelled pecans may be kept in the refrigerator in a covered glass jar or plastic bag. When buying shelled pecans, look for full plump kernels that are consistent in size and color.

“The packaging needs to be impermeable to oil and exclude air and moisture,” Nesbitt said. “Airtight glass containers are best, but you can also use plastic bags or wrap. Of course, it’s always a good idea to refrigerate your pecans when you get them home — even the ones you’ll be using in the near future — to ensure they’re at peak flavor.”

He said the fat in pecans makes them an absorber of flavors in other foods stored along with your refrigerated pecans, so double-bagging or using heavy, plastic containers for in-shell or shelled pecans will reduce odor transfer.

“Frozen pecan kernels won’t lose flavor, so you can thaw and refreeze them as often as you like over the two-year period they are in the freezer,” Nesbitt said.

A good general rule of thumb is that they should be stored in a cool environment when they are to be used in the near future and stored in a freezer if they will not be used for some time.

“Pecans that won’t be used for more than four months – be they in the shell, cracked or shelled – should be stored in the freezer,” he said.

“Pecans are most popular during the holidays but have a fairly consistent fan base throughout the rest of the year as well,” said Odessa Keenan, AgriLife Extension program specialist for Texas A&M AgriLife’s Healthy Texas initiative.

Keenan said pecans are a Texas staple and the Pecans section of the Dinner Tonight website contains recipes in which pecans are an important ingredient.

One of the most common non-cooking-related questions consumers have about pecans is whether or not it is safe to feed them to the family pet.

“Most nuts, excluding macadamia nuts, are technically safe in that they are not toxic to domestic animals,” said Catherine “Cat” Barr, toxicologist at the Texas Veterinary Medical Diagnostic Laboratory, Bryan-College Station.

However, she said, dogs are sensitive to foods containing a high degree of fat. The high fat content of nuts can cause gastrointestinal issues in dogs with sensitive stomachs or those prone to pancreatitis. And for overweight dogs, there are any number of more appropriate treats.

“Dogs are not built to manage a high-fat diet well, so they should not be fed pecans,” Barr said. “If they get a few pieces here and there, it’s probably not a big deal, but that depends on the rest of their diet and body weight. And it’s definitely not a good idea to give dogs pecans if they are part of a sweet that has additional fats or sugars … that’s just too much.”

Barr also noted nuts are sometimes infected by molds such as Aspergillus and Penicillium, which can produce mycotoxins that are harmful and possibly even deadly to animals if ingested in large doses.

“This occurs more frequently in nuts stored in the shell, especially under damp conditions,” she said. “Throw away visibly moldy nuts so nothing – not even squirrels or raccoons — can eat them.”