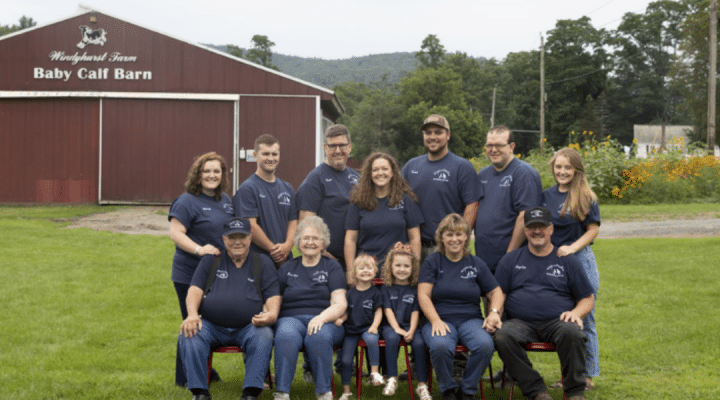 WESTMORELAND, N.H. — The Green Pastures program started in 1948 when Governor Dale bet a Stetson hat that New Hampshire had greener pastures than the other New England states. He lost the bet, but it began an annual recognition of awarding Dairy Farm of the Year in each state. Now the criteria have been expanded to include herd management, conservation practices, cropping, community involvement, etc. The winner from each state is recognized at a banquet held in conjunction with the Eastern States Exposition. This year the banquet will be held off campus at the Crestview Country Club in Agawam, Massachusetts on Friday, September 17.

Recently a group of judges, made up of the previous winners from the past three years, traveled around the state interviewing and touring the farms of those nominated this year. This was done in cooperation with UNH Cooperative Extension. The winning farm was Windyhurst Farm, operated by Stuart and Robyne Adams and their family of Westmoreland. The farm had been a winner under the previous generation, Roger and Ellie Adams, in 1975.

Windyhurst Farm is located on a scenic bend in the road in Westmoreland, New Hampshire. The farm was founded when Lois Adams married Lawrence Leach in 1951 moved to the farm with her sons, including Roger Adams. Lawrence died a few years later leaving the farm to Lois. Roger and Ellie Adams were married in 1958, and they took over managing the farm. In 1985 Roger and Ellie and their son, Stuart, formed Windyhurst Farm Partnership. He and his wife, Robyne, are the third generation who run the farm currently. Several of their children work and live on the farm as well.

Upon forming the partnership, they also put most of the acreage into conservation. Currently, the farm is milking 270 registered Holstein cows, with a total herd around 525. Between the land owned and leased, they are maintaining around 600 acres of farmland in the Connecticut River Valley and Cheshire County. The herd averages 24,547 pounds of milk, 978 pounds of butterfat, and 754 pounds of protein and ships their milk to Dairy Farmers of America (DFA).

The farm works closely with Natural Resources Conservation Service (NRCS) in many capacities. It participates in a nutrient management program with the agricultural land, as well as rotational cropping, and no-till. In 2013, the family was awarded the Cheshire County Conservation District’s Cooperator of the Year Title, and then also the NH State Cooperator of the year. The farm values the relationship it has with the Conservation District and the partners were very proud to receive that distinctive title recognizing how hard they work to conserve the farmland for future generations. The land farmed in the Connecticut River Valley is prime soil and important to the preservation of a New Hampshire food supply. The farm has a strong commitment to local agriculture and has made huge investments over the years to keep the farm running and increase its efficiency.

Over the past several years, there have been several major building projects. In 1992 a new drive-through free-stall barn was added to the existing barn. A new heifer/dry cow barn was built in 2014, and the previous heifer barn was renovated in 2015 to accommodate calves, putting them nearer to the restaurant and accessible to the public.

After completing the heifer barn, a manure system was installed which has the capacity to store the manure from all the cattle in a 1.8-million-gallon tank. They lease the Cheshire County Farm to house 80 heifers, which has allowed them to add 60 more milking cows in the main cow barn. Then at the end of 2020, a modular milking parlor unit was moved in to expand the old parlor to a 15-stall herringbone.

The farm has diversified over the years. It also owns and operates Stuart & John’s Sugar House, which has been in business with a close friend since 1975. This is a large maple operation which has over 10,000 taps with a vacuum system and reverse osmosis and a restaurant. On an average weekend, they serve around 500 people. People enjoy coming the farm not just to have breakfast or an ice cream, but to see the scenic views and the cows. They can walk through the calf barn with their children and see all the baby calves.

The farm is well known in the community and the family members have served in various capacities on town boards and the Cheshire County Fair. Stuart has been on the Westmoreland school board for over 25 years. They are often called upon to supply maple syrup for functions. They are members of the Grace Community Evangelical Free Church in Spofford, NH; New Hampshire Farm Bureau; and the NH Maple Producers Association.