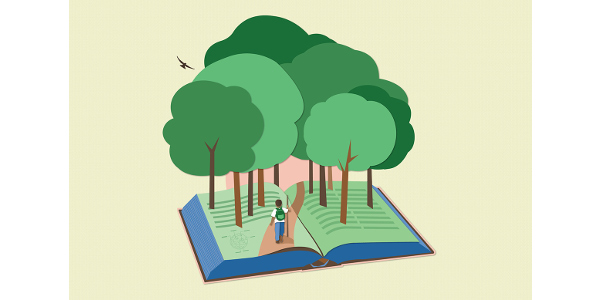 Childhood setting and exposure to nature are strong predictors of academic performance in environmental sciences courses, according to a recent study by soil science professor Nick Balster. (Illustration by Danielle Lamberson Philipp)

MADISON — If you excelled in your college science classes, chances are you spent much of your youth outside the city limits or exploring nature with grass stains on your knees and soil under your fingernails.

Childhood setting and exposure to nature are strong predictors of academic performance in environmental sciences courses, according to a recent study by soil science professor Nick Balster. And this finding, among others from the study published in Environmental Education, points toward ways to combat troubling trends in STEM fields at the college level and beyond.

Many estimates suggest that the U.S. will face a deficit of one million students in science, technology, engineering, and math — otherwise known as STEM fields — in the next decade. Meanwhile, according to the Science and Technology Policy Institute, fewer than 40% of students who enter a STEM discipline in higher education actually complete such a degree. Most switch to non-STEM majors following poor performance in introductory coursework.

“Those statistics continue to weigh heavily on me,” says Balster, who, when he isn’t in the classroom or studying the communications between plants and soil, is immersed in the scholarship of teaching and learning. “And many people are trying to understand the reasons behind these trends and how to reverse them. Because, at the other end, employers are hungry for STEM graduates.”

Many factors, including high school GPA to interest in course content, have been shown to affect student performance in college STEM classes. But Balster suspected there’s a bit more to it. Some of his thinking was guided by reflections on his own childhood.

“In fourth grade, we moved from a suburb of Chicago to rural Indiana,” says Balster. “It was a mind-blowing experience in every respect because I went from a subdivision that was organized, largely predictable and comfortable — sidewalked blocks with friends only a bicycle ride away — to a hobby farm complete with acres of forests and wetlands to explore. I helped raise a large garden for the first time in my life and was thrust into the wonderful randomness of nature and dealing with things like weather as never before.”

So the influence of this urban versus rural upbringing on students’ interest and performance in his classes was at the top of Balster’s mind. A reading of “Last Child in the Woods” took him further down that path. In this seminal work, Richard Louv introduces the term “nature deficit disorder” to describe the human costs of greater urbanization and immersion in technology.

Louv’s ideas crystallized Balster’s hunch that where students grow up (urban versus rural settings) and their level of interaction with nature can influence their interest and, therefore, academic achievement in science courses. He further hypothesized that these aspects would be especially relevant in environmental sciences classes, given their close ties to the course content.

With support from the National Science Foundation, Balster recruited Melanie Spero PhD’15, who served as lead author, and Alex Bajcz, his postdoc at the time, to test these hypotheses via an analysis of nearly 800 students in 11 introductory courses at a major research university. Spero, who was a doctoral student in microbiology at the time, joined the project as part of her internship with UW–Madison’s Delta Program, which helps future faculty develop their skills in teaching, advising, and mentorship — a program Balster has engaged with for many years.

The assessed courses were distributed across several environmentally focused fields, including environmental studies, forest and wildlife ecology, botany, atmospheric and oceanic sciences, soil science, and agronomy. In addition to demographics such as academic rank and gender, students were asked about the communities where they grew up, their engagement with nature, and whether they thought their interactions had any bearing on their academics. Other questions delved into areas that might confound the results or suggest cognitive bias, such as career aspirations, level of interest in the course, and previous experience with course content.

The team correlated the students’ coded answers with their final grades as an initial measure of “achievement” in the course. To minimize the effects of differing grade distributions and methods of instruction, grades were statistically standardized across courses relative to the median grade in each course. Following a multiple, mixed-effect regression analysis, a few factors stuck out as particularly pertinent to performance in these courses.

“Median-centered grades were significantly correlated with the residence type in which the students spent most of their childhood; a greater proportion of students who came from a more rural setting were earning higher grades, on average, than students who were coming from more urban settings,” says Balster. “And students who spent more time interacting with nature before college were earning almost a letter and a half grade higher over the median.”

For Balster and his coauthors, the findings highlight several ways teachers might boost performance in STEM courses. This includes promoting more substantive interaction with natural systems and more focus on building interest, taking cues from what appears to work in precollege settings.

“The latest research shows that these interactions are most effective when they’re somewhat less formalized and rote,” Balster says. “For example, when a child is allowed to explore, to follow their interests and directly interact with the content, when it’s more based on authentic problem solving and less on being talked at — a learner-centered approach. This approach can also work in the college classroom; however, it can be a bit scary to implement and assess in that we have to give up a bit of control. And too often it’s viewed as a destination and not a practice that changes with student backgrounds, interests, and innovations in teaching and learning, such as flipped classrooms and case-based instruction.”

The study also indicates that level of interest in the course content plays a role in academic performance. Not surprisingly, students who reported greater interest did at least modestly better in the class. But perhaps even more revealing, those who reported being uninterested performed profoundly worse. One caveat regarding this finding, Balster says, is that separating the impact of interest from formative childhood experiences is difficult, as they likely build in tandem.

To help address the issue of interest, Balster points to several modifications that can be made to instruction at the college level. For example, departments could assign their most enthusiastic and innovative instructors to intro-level, or “gateway,” courses, where studies show most students make the decision to abandon STEM. This might boost their interest and, by extension, their level of success at an earlier stage.

Balster also suggests that taking a “backward-designed learning outcomes approach” can help instructors reframe how they teach. This approach moves beyond broad content coverage to a learner-centered strategy that focuses on “scaffolding” the most enduring concepts.

Through the scaffolding process, Balster says, teachers move students progressively toward deeper understanding and independence in their learning by crafting instruction around successive levels of critical knowledge and skills. The teacher then removes this support, incrementally, to shift more responsibility for the learning to students so they can use the knowledge independently. This is one of many practices that fellows hone at Madison Teaching and Learning Excellence, a campus program Balster co-created in 2011 to support early-career faculty in developing research-based, engaging teaching practices that improve student learning.

“Most important, we need to think deeply about our introductory courses, and we need to focus on threshold concepts that encourage and challenge students to think differently within an authentic context that gets them excited to pursue science,” Balster says. “And I believe this begins with a focus on the classroom environment, getting to know our students, being nimble enough to match their context with our instructional design, so we can meet them where they are at and choose the best thresholds to guide them across, rather than a mind-set of ‘we’re going to get through all of this material.’ I don’t remember who said it, but I have always loved the quote: ‘Education is not just the filling of a pail but the lighting of a fire.’”

$400,000 in grants approved for poultry research