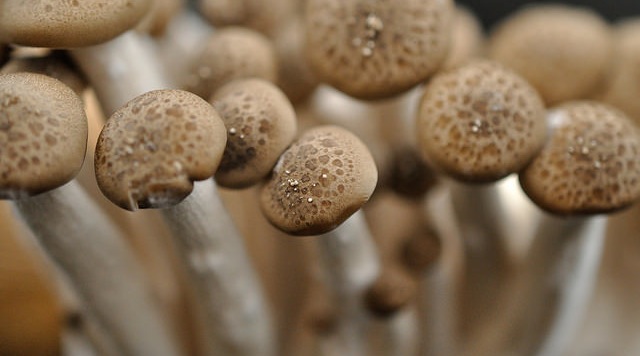 REDWOOD SHORES, Calif. — The mighty mushroom not only is healthy on the plate, it’s also gentle on the planet – according to a new study measuring the water, energy and carbon emissions required to grow and harvest fresh mushrooms in the United States.

The study finds production of a pound of mushrooms requires only 1.8 gallons of water and 1.0 kilowatt hours of energy, and generates only .7 pounds of CO2 equivalent emissions. In addition, the annual average yield of mushrooms is 7.1 pounds per square foot – meaning up to 1 million pounds of mushrooms can be produced on just one acre.

“Our growers have long sought to benchmark their production practices to not only accurately measure our environmental impact, but also seek opportunities to improve upon our practices,” said Bart Minor, president and chief executive officer of the Mushroom Council, which represents the U.S. fresh mushroom industry. “Like all agricultural producers nationwide, we all want to ‘do better’ when it comes to being stewards of the environment. We are humbled to finally measure what we consider a low environmental footprint, but equally motivated to find opportunities to lower it even more.”

Researched and developed by SureHarvest, a leading sustainability analysis and research firm, The Mushroom Sustainability Story documents practices at 21 facilities nationwide, responsible for one-third of the U.S. fresh mushroom crop. Researchers collected data for all steps of the mushroom production process, including composting, spawning, casing and pinning, and harvesting.

“SureHarvest’s two-year analysis concludes that the amount of natural resources and space required to grow mushrooms is remarkably low compared to the published data on other foods,” said Dr. Jeff Dlott, president and chief executive officer of SureHarvest and chief researcher for the project. “Mushrooms can now definitively be considered one of the most sustainably produced foods in the United States.”

Water Required is a Fraction Compared to Other Foods
SureHarvest calculated the overall water footprint per pound of production by collecting information on fresh water applied, precipitation and water embedded in the composting ingredients. The 1.8 gallons of water required to produce a pound of mushrooms is a fraction of water inputs required for many other foods.

Keeping CO2 Emissions and Energy Footprint in Check
To determine the 1.0 kilowatt hours (kWh) energy usage per pound of mushrooms, researchers calculated energy consumed during harvest by converting fuel use by type into kWh, then combined with kWh of electricity use. CO2 equivalent emissions were calculated by tracking total emissions from electricity and fuel used for composting equipment and growing operations (e.g. equipment, heating, cooling, etc.).

Mushrooms’ Small Growing Space Conserves Soil, Nets High Yields
The study calculated the average yield per square foot by measuring more than 42 million square feet of mushroom production area. Each year, growers are able to produce millions of pounds of mushrooms on just a few acres of land. In addition, the soil used to produce mushrooms is made of composted materials. After mushrooms are harvested, the soil is recycled for multiple uses, including potting soil. The 7.1 pounds of mushroom yield per square foot is achieved in part because mushroom beds are stacked vertically in growing facilities, allowing a high volume of mushrooms to be grown in a relatively small space.

How Fresh Mushrooms Are Grown
Last year, U.S. growers produced more than 946 million pounds of fresh mushrooms. Mushrooms’ growing process is one of the most unique stories in agriculture. For example, mushroom production is naturally sustainable, as inputs to the composting process are primarily recycled materials and agricultural byproducts.

How Fresh Mushrooms Are Grown Last year, U.S. growers produced more than 946 million pounds of fresh mushrooms. Mushrooms’ growing process is one of the most unique stories in agriculture. For example, mushroom production is naturally sustainable, as inputs to the composting process are primarily recycled materials and agricultural byproducts.

The Mushroom Council provides an overview of the mushroom growing process, as well as the nuances for growing some of the more popular varieties.

About The Mushroom Council
The Mushroom Council is composed of fresh market producers or importers who average more than 500,000 pounds of mushrooms produced or imported annually. The mushroom program is authorized by the Mushroom Promotion, Research and Consumer Information Act of 1990 and is administered by the Mushroom Council under the supervision of the Agricultural Marketing Service. Research and promotion programs help to expand, maintain and develop markets for individual agricultural commodities in the United States and abroad. These industry self-help programs are requested and funded by the industry groups that they serve. For more information, visit mushroomcouncil.org.

Be a part of Angus history