Home » The Mechanical Reaper: The impact of an important farming invention
Hansen's Histories 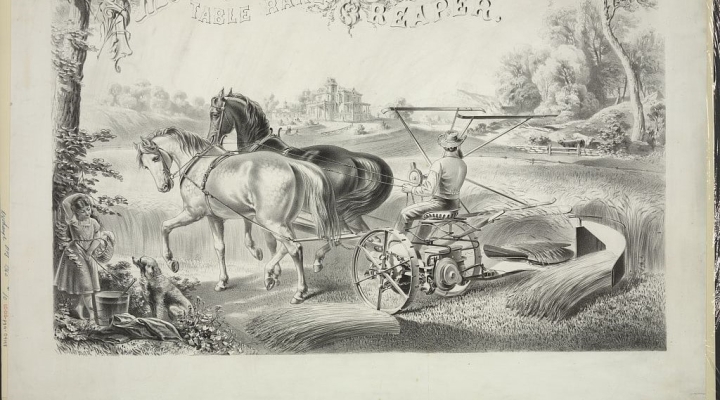 The reaper offered farmers the ability to harvest more in a shorter amount of time with less labor. (Image courtesy Library of Congress)

GREENWICH, N.Y. — With autumn comes the harvest. Farmers are busily chopping and hauling, or will soon be doing so within the next few weeks. As we enter this important time in the farmer’s year take a look back at the story behind an invention that changed the harvest and American agriculture: the mechanical reaper.

The mechanical reaper was invented by Cyrus McCormick in 1831 in Rockbridge County, Virginia. For nearly 30 years McCormick’s father, Robert, tried to invent a mechanical harvesting machine without success. It was his son Cyrus who was able to “crack the code” and design a usable device after spending six weeks of intense work in the family’s blacksmith shop in the summer of 1831. He later demonstrated the machine to local farmers who at first were perplexed by the contraption, but eventually were impressed with what it accomplished. McCormick was able to successfully use it during that year’s harvest as well.[1]

The reaper consisted of a wheeled chariot pulled by a team of horses. As it moved a vibrating blade moving back-and-forth would cut the grain in its path. A divider separated cut and standing grain. The cut grain would then fall into a reel which brought it to a platform where it would be pushed off onto the ground. A farmer would then rake into piles the cut grain for binding.[2] Later models eventually added features that would thresh and bag the grain as well.[3]

The reaper dramatically changed the way farmers harvested grain. Prior to its advent, harvest was a process that required many people using hand tools like sickles and scythes. With this method a farm could harvest around two acres of crop a day. If a farmer did not have enough help they faced the possibility of crop loss, or they would have extra expenditures to hire help for the harvest. The reaper offered farmers the ability to harvest more in a shorter amount of time with less labor.[4]

McCormick was not the first to make a reaping device. Another inventor named Obed Hussey made a device and patented it a few years earlier, however McCormick’s had several advantages that made it superior, namely the divider. (Hussey would become McCormick’s main business rival for many years and the two would go toe-to-toe in business and legal arenas several times). McCormick continued to make adjustments to the reaper and took out a patent on his invention in 1834. However, for several years his attention was more focused on other matters, mainly his family farm’s iron foundry and the invention lay dormant. The Financial Panic of 1837 changed this though as it led to the failure of the foundry and left the family in debt. To get out of debt McCormick turned to his reaper which he began producing and selling by the 1840s.[5]

In 1844 McCormick took a trip to the Midwest and he left the area convinced it would be the ideal place to sell his reapers because of the great amounts of wheat and other grains grown there, and the increasing farming population. This proved to be a wise premonition. In 1847 he opened a factory in Chicago with the help of the mayor William Ogden. In the first year 800 reapers were sold.[6]

A savvy businessman and expert advertiser McCormick traveled the Midwest selling reapers which were known in most parts of the country by 1850. The reaper gained world acclaim in 1851 after being on display and winning awards at The Great Exhibition in London. By the late 1850s McCormick’s company was producing thousands of reapers year, coming out with new models each year similar to cars today.[7]

McCormick Harvesting Machine Company continued to grow incorporating other kinds of farm machinery into their production. The company stayed strong even after the factory was destroyed in the Great Chicago Fire in 1871. In 1902 the business merged with other companies to form International Harvester Company, a well-known name in farm machinery that still exists today.[8]

The reaper impacted American agriculture and American life in several ways. The ability to harvest more led farmers to start growing more and decreased the possibility of food shortages. The ability to grow more acres of crops further attracted people moving west in the latter half of the 19th century. The reaper contributed to the Industrial Revolution. The reaper limited the amount people it took to farm freeing people up to work in factories and other industrial fields.

Some historians also believe it contributed to the outcome of the Civil War as well. Most reapers were sold and used in the North by the time of the Civil War thus lessening the impact on Northern agricultural production of men leaving to fight for the Union. The South was still largely dependent on manual labor for its farming, so men going to fight for the Confederacy dealt a bigger blow to the South’s agricultural production.[9] The North had a larger population in general, and the reaper may have further heightened this advantage.

While it may seem arcane compared to today’s GPS-controlled combines and other high tech farm machinery, the mechanical reaper was an important advancement that helped transform American agriculture.