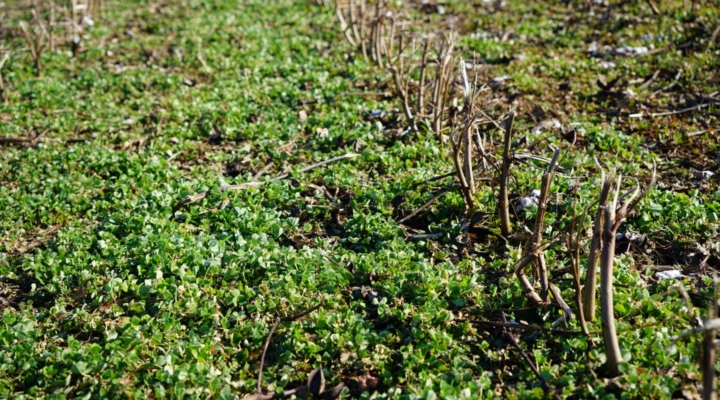 Clover peeks out among the residual stalks of harvested cotton crop in a research plot at a University of Tennessee AgResearch and Education Center in West Tennessee. Clover is among the cover crops planted following cotton harvest to help preserve soils and restore fertility. The particular plot shown was part of a long-term study started 29 years ago by UT's renown soil scientist the late Don Tyler. (G. Rowsey, courtesy UTIA)

KNOXVILLE, Tenn. — It isn’t often that researchers have the luxury to examine data from a long-term research project. While most research projects last from three to five years, scientists with the University of Tennessee Institute of Agriculture recently published a study that covered a 29-year period to find the benefits of cover crops on no-till cotton fields.

Cotton is a major crop grown in the southeast and after harvesting there is very little residual biomass. Without a crop covering the ground, there is an increased amount of soil exposure that can lead to erosion from winter rains and runoff. No-till agriculture was steadily adopted by producers as a way to save topsoil and reduce soil erosion in their fields. Cover crops, such as winter wheat were also added to the mix by some producers to enhance the benefits of no-till production.

The study, published in Nov. 2017 in Agronomy Journal, was the brainchild of the late Don Tyler, a renown UTIA soil scientist, who was interested in how no-till and cover crops may help reduce erosion. “Back in the 80’s he saw that this was a potential problem down the road and set up an experiment in Milan, Tennessee, to see how no-till and cover crops can impact cotton yields,” said Chris Boyer, the paper’s lead author and a UTIA associate professor of agricultural and resource economics.

The team looked at the data from the past 29 years to determine whether it is profitable to include cover crops in an erosion management strategy. They found that while cover crops can cut into profitability over the short term, there are a number of benefits over long-term adoption. “The benefits are accumulated benefits and it takes a number of years of this practice before you see them,” said Boyer.

In addition, a number of environmental benefits may be realized through the adoption of no-till practices along with cover crops, primarily in decreased soil erosion. “While the study didn’t measure environmental impacts, it is a very valid reason for producers to adopt no-tillage and or cover crops,” said Boyer.

Boyer says that data sets covering such a long period of time are very unusual in research projects. “Our approach of looking at the problem from a long-term financial standpoint was really unique to what other studies have done. It was the genius of Don Tyler and his foresight that have us such an incredible data set to examine,” said Boyer.

–University of Tennessee
Institute of Agriculture
via EurekAlert!

Plants thrive with no care in Wardian cases