Home / DelMarVa / Delaware / The legacy of the disappearing silo 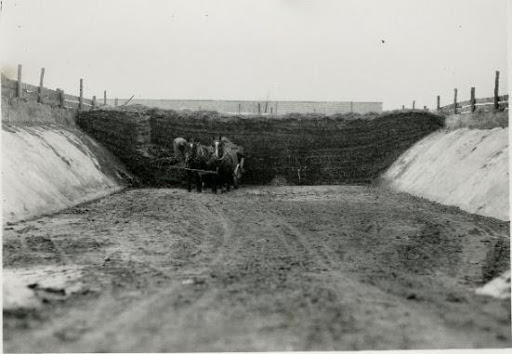 A silo may seem timeless but they have only been around just over 120 years. In 1882, there were only 91 silos in the United States. By 1895 there were over 50,000 across the country. By the early 1900’s there were more than 500,000 silos dotting the agricultural landscape of America. (photos provided)

GEORGETOWN, Del. — I had not thought much about the construction of a farm silo until a few weeks ago when my sister Donna and I were visiting Bobby Wright’s farm near Harrington, DE. We drove up to Bobby and Sylvia’s picturesque farm and we immediately noticed the tall stately silo with a very sophisticated roof and dark brown tiles in perfect condition. Bobby who is a bit of a “silo historian” himself told us his silo was built in the early 1900’s and was one of three hollow-tile silos still in existence on Delmarva. Bobby and his grandson Skylar, pointed out some of the unique features of the silo. They had some of the original rounded tiles so we could see how they were constructed. The Wright’s silo is well preserved and a charming architectural silhouette on our agricultural landscape. 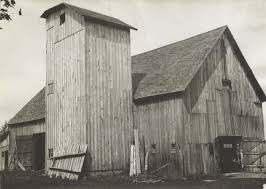 The tower silo has always marked what most of us see as the traditional farmstead. Much like a lighthouse marks the shoreline, a silo marked where a farmer lived his life and earned his living. Silos as much as any other farm building have always had a significant impact on our rural landscape. They once were a symbol of a prosperous dairy industry. I was intrigued and wanted to learn a little bit more about these structures and how they evolved.

A silo may seem timeless but they have only been around just over 120 years. In 1882, there were only 91 silos in the United States. By 1895 there were over 50,000 across the country. By the early 1900’s there were more than 500,000 silos dotting the agricultural landscape of America. Today we see fewer and fewer silos on our landscape. Farmers are constantly improving their practices and one of the areas that continually changes is the method of storing feed. 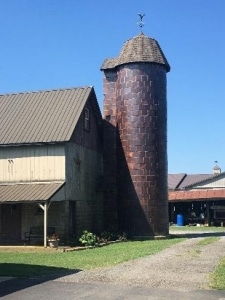 For centuries there had always been a problem of how to store and carry over crops from one growing season into a winter or dry season when there was less availability of high quality green feeds. In the 1870’s, silos were horizontal and called pit silos. They were built of wood or stone and dug fully or partially in the ground. The term “silo” comes from the Latin word silus which means cellar. Ensilage is the term used to describe the process of making and storing green fodder in the winter.

Francis Morris, a farmer from Maryland built the first tower style silo in the early 1880’s. These early vertical silos were square and made of wood or stone. The square shape created problems with the structure bowing and allowed air pockets in the corners.

Air had to be eliminated to properly ensilage a crop and reduce the rate of spoilage. Square silos were rarely built after the 1900’s. Farmers quickly realized the shortcomings of the rectangular or square silo and began developing many variations of round silos. Round silos eliminated corners that promoted rot, enclosed more space using less material, and were structurally suited for the pressures of the heaving materials. Silage and a workable silo opened the door to year-round dairying, making it a lucrative, full-time occupation. By the turn of the century, silos had become an accepted part of the farmstead.

Initially round silos were built in a variety of designs using wood. The most commonly built type was the wood stave silo. Stave silos consisted of long planks placed upright on a foundation. The wood was secured by circular irons bands in a manner similar to water barrels. These silos worked well when they were full but sometimes collapsed when empty. A more sophisticated method used tongue and groove joints that were spiked together. These silos could be bought as a kit and were sold by local dealers. The wooden silo, while cheap and relatively easy to build still had a number of problems. They were not airtight and were notorious for leaks. The greatest threats to the wooden silo was rot and fire. 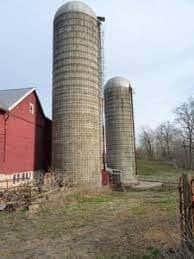 Stone silos were popular in areas of the country where there was availability of fieldstone or quarried rock. Using field stone had the added benefit of helping to clear the fields for cultivation. Farmers with stone silos were generally satisfied with the effectiveness of the structures. The principal problem with a stone silo was that over the years the mortar inside became soft from the silage acids. They required constant repair to maintain the airtight requirement for ensilaging.

Around the turn of the century, farmers began to experiment with various types of masonry materials to build silos. More and more farmers had adopted the ensilaging process and they were looking for more efficient ways to preserve their crops. The use of masonry materials created advantages over the wood and stone silos. There was less maintenance. The masonry silos were stronger, more durable, more airtight, less susceptible to fire and they could build them higher. Concrete and cement date back to ancient times but new technology introduced in the 19th century increased their effectiveness. The cement was harder and the concrete could be reinforced with metal rods.

There were several types of masonry construction. Brick was a natural candidate but was rarely used because of the high cost. After the development of natural gas in the early 1900’s, cheap gas-fired ceramic hollow blocks became a material of choice. The ceramic block material was durable, attractive, and proved to insulate the silage against freezing. Ceramic block silos became extremely popular but the popularity proved to be short lived. The dark brown and glossy appearance of fired tile was offered as a coordinating scheme for farmyards including silos, barns and miscellaneous outbuildings. The kits were quite expensive and farmers seldom opted for the unifying construction material theme. It was seen as an unnecessary expense. The hollow-tile ceramic silos like the one at the Wright’s farm are rare. The condition of this silo speaks to the durability and lasting attractiveness of this material.

Farmers began to use cement as the quick, easy building material for their silos. The cement stave silo was introduced around 1910. It is made up of masonry units that hook together with interlocking edges with mortar applied between the joints. The staves are reinforced by either flat or round metal bands. The inside of the silo was sealed with a thin layer of concrete. The cement stave silo was cheaper than silos of brick or ceramic tile and did not need any special masonry skills. It became the standard in the silo “look.” The stave construction technique is still used today.

The monolith silo was another construction method using concrete. They have no exterior supports with the reinforcement within the concrete itself which eliminates the hoops or bands as in the cement stave silo. The monolith silo is seamless and has a very clean appearance. This is the same construction that is used by grain elevators. Concrete blocks were used to build silos but they were not considered as strong as the monolith silos. The block silos were more expensive to construct and were not as widely accepted as other concrete types.

The brilliant blue silos you might see are known by the brand name “Haverstore.” The design was introduced in the 1940’s. The Haverstore silos are made from fiberglass bonded to curved sheets of steel and then formed into an airtight structure. These silos respond to the long known fact that the removal of air results in the highest quality silage. The glass lining of the Haverstore successfully resisted silage acids.

Silos are rarely erected today. Farmers are looking for faster feeding and environmentally beneficial storage methods. They are moving towards bunker silos or flat storage rather than tower storage. The long, white bags you see snaking along near cow barns are filled with nutritious mix of feed. Plastic bales of silage are easier to work with and faster to access. This trend toward flat storage began about 20 years ago.

The eye-catching tower silos may disappear from our farm landscape when they are no longer built and the remaining ones decay. However, the silo gives us some insight into American technological progress. Like the granaries and the corncribs before them, the silo gives evidence of new ideas for solving old problems. So while it’s a little sad to find out our tower silos are standing unused or being torn down, take heart. It is just another sign of progress by our farmers who are committed to providing foods and beverages that are good for us and good for our environment.

If you have a silo still in use, still standing or once stood on your farm, send us a picture nancy@kingcrop.com. We want to document the history of the silo in our region.

Assistance available to expand conservation activities on Delaware farms
May 4, 2020