Subscribe
Home / National / The importance of waterways to U.S. agriculture 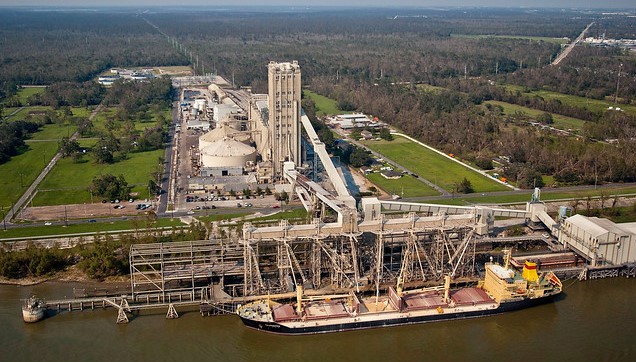 Barge and ship traffic transporting export cargo on the Mississippi River in the Port of New Orleans. (U.S. Department of Agriculture, Flickr/Creative Commons)

“Logistics and transportation are some of the most important aspects to farming and America’s superior inland waterways are critical to our overall agricultural system,” Secretary Perdue said.“Water transport is the most efficient, cost-effective transportation for our producers, and our waterways keep the American exporter the most competitive in the world. President Trump has made it a priority to revitalize our nation’s infrastructure and invest in our rural communities, and his goal to reestablish America’s economic prowess on the global stage can be furthered by rebuilding our waterways to support agriculture exports. We must continue to invest in modernizing our lock and dam infrastructure that flows through the heartland of agricultural production.”

“This Nation’s inland waterways are vital to our economy as they provide cost-effective transportation to producers and manufacturers throughout system while reducing pressure on our overburdened interstate highways,” said Assistant Secretary James.  “Our inland waterway system is the largest in the world and provides jobs that strengthen American communities and the nation as a whole.  This invaluable system is aging; the Corps of Engineers diligently addresses the systems maintenance needs with resources provided to ensure efficient shipment of goods, while continuing to expand partnerships and build new alliances in order to maintain America’s competitive edge in global markets.”

Inland waterways—including the upper and lower Mississippi River, Arkansas River, Illinois and Ohio Rivers, Tennessee River, and the Gulf Intracoastal Waterway—carry large volumes of farm products over long distances. This vital “water highway” involves 12,000 miles of inland waterways and 218 lock chambers at 176 sites and moves more than 530 million tons annually, accounting for nearly 60 percent of all corn and soybeans we export with a combined value of $17.2 billion.

Secretary Perdue and Assistant Secretary James will tour Melvin Price Locks and Dam, operated by the U.S. Army Corps of Engineers (USACE), and receive a briefing by Major General Mark Toy, Commanding General, Mississippi Valley Division, UASCE, and President of the Mississippi River Commission on the workings of the facility and the importance of the waterways system to our country.

They will also meet with agricultural and waterways stakeholders during a town hall meeting, at which Secretary Perdue will brief  participants on the findings of a report USDA released today—Importance of Inland Waterways to U.S. Agriculture.

The report utilizes economic modeling to forecast the impact to farmers and to U.S. competitiveness of varying levels of investment in the country’s inland waterways system over a 10-year and a 25-year period. The report found increased investment in the inland waterways system of $6.3 billion over a 10-year period would cumulatively grow our country’s GDP by $73 billion by 2045 and add more than 77,000 new jobs.  Moreover, the efficiencies gained by dredging the lower Mississippi River from Baton Rouge through New Orleans and out the Southwest Pass into the Gulf of Mexico would alone result in a 12 to 13 cent per bushel improvement for farmers on the price of corn and soybeans. This would positively effect land values and increase the draw area around our waterways. The increases in employment and GDP are projected to more than offset the cost of completing proposed projects.

The analysis also found that increased investment in the inland waterways system would allow for the transportation of increased volumes of commodities with farm products growing from 14 percent of commodity volumes on the system in 2016 to 25 percent by 2029 and 29 percent by 2045.

To view the report in its entirety, please view the Importance of Inland Waterways to U.S. Agriculture.