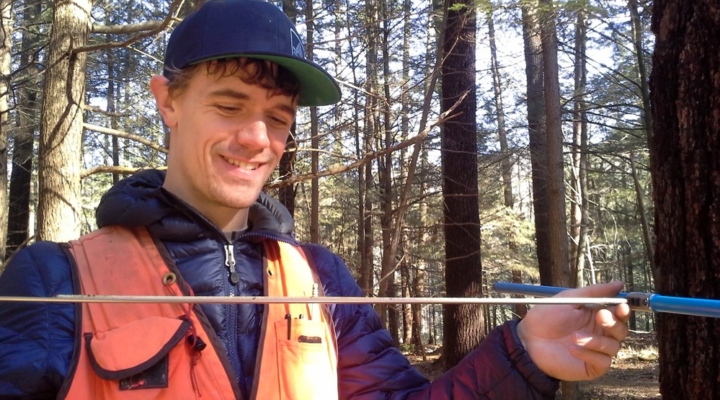 DURHAM, N.H. — White Pine Needle Damage, a complex of foliar diseases that is being accelerated by the region’s warmer, wetter springs, is slowing the growth and hampering the health of New England’s eastern white pines, according to new research from the New Hampshire Agricultural Experiment Station at the University of New Hampshire.

“Additionally, white pine has many important ecological roles in New Hampshire’s forests, including providing a food and habitat for numerous wildlife species. Its seeds are eaten by various birds and small mammals, while rabbits and deer browse white pine foliage. White Pine forests support diverse wildlife communities, including breeding birds, bald eagles, and cavity-nesting wildlife,” said Cameron McIntire, a doctoral student in natural resources and the environment at UNH who also is working on the project.

Starting around 2010, eastern white pine began being impacted in the region by a collection of foliar pathogens termed White Pine Needle Damage. Infected trees experience a yellowing of mature needles in the early spring, followed by a large defoliation event beginning in mid-June.

“This disease is of great concern because it consists of native fungi that are behaving in new ways. Prior to 2010, White Pine Needle Damage fungi were not considered a significant forest health issue. However, recent changes in the regional climate, namely a trend of warmer and wetter springs, have facilitated the spread and severity of this disease complex,” Asbjornsen said.

As a result, experiment station researchers are assessing the impacts of the the disease on tree health and productivity, and developing silvicultural guidelines for land managers for mitigating the negative impacts of the disease in white pine-dominated forest stands.

Scientists have been able to directly measure the defoliation caused by White Pine Needle Damage using litterfall methods that are commonly used to estimate above ground biomass production. While these methods are typically conducted once or twice year in order to estimate an annual carbon budget, UNH researchers looked at monthly litterfall throughout the growing season (May-October) on a finer scale.

“We found that 47 percent of the total annual litterfall is now occurring during the months of June and July, much earlier than the time of natural needle senescence in October. Typically, white pine will cast the majority of its mature second and third-year foliage in the month of October, just as broadleaf species like oak and maple,” McIntire said.

“As a result of White Pine Needle Damage, much of the mature foliage is lost during the most productive part of the growing season, so trees are not able to assimilate as much carbon as would be expected within healthy stands. Furthermore, the new needles take approximately four months to fully develop, during which time they do not photosynthesize at the same rate as mature needles. This is quite different from broadleaf species, which flush out new foliage in a matter of days in the early spring and can often re-flush foliage if a defoliation event occurs,” he said.

In addition, researchers found that infected trees are not able to resorb nitrogen from needles cast during summer. This is important because nitrogen is an essential element in the enzymes that facilitate photosynthesis. Normally, trees will resorb nitrogen in October prior to the autumn leaf drop and store it within woody tissues until the next growing season. A possible consequence of reduced nitrogen resorption is that infected trees may need to take up additional nitrogen from soil in successive years following defoliation, which could influence how carbon is allocated within the tree, potentially impacting its growth.

They also looked at annual tree rings in diseased white pine stands throughout New England to detect the exact timing that White Pine Needle Disease began to influence growth, and measured the resulting growth declines. They found that infected stands have reduced stem growth 25 to 73 percent since the outbreak began, equivalent to a reduction in stem basal area increment of 11 cm2 each year.

Understanding the impacts of this disease is the first step toward developing management guidelines. For example, eastern white pine is known to respond well to thinning treatments. With this in mind, researchers reduced stem densities within infected stands. They found that tree vigor increased in the second year following the treatments, and disease severity was reduced. Based on these promising results, they now recommend that landowners prioritize thinning within infected stands or stands that are at high risk of infection, following established stocking guidelines for eastern white pine.

“This research is of great interest to forest ecologists studying the complex interactions between climate and tree pathogens. As trends in the Northeast show that our region is becoming wetter and warmer each year, we may expect to see an increase in new disease outbreaks in the future. Improving our ability to quantify the forest health impacts and treatments will allow us to be ready for future outbreaks,” Asbjornsen said.

This research will be presented in a forthcoming special issue of the journal Forest Ecology and Management about eastern white pine. Scientists have presented these results at several professional meetings, including the Ecological Society of America Annual Meeting, the ECANUSA Conference in Forest Science, a joint annual meeting of the Northeast Forest Pest Council and New England Society of American Foresters, andInternational Union of Forest Research Organization (IUFRO) World Congress.

This material is based upon work supported by the NH Agricultural Experiment Station, through joint funding of the National Institute of Food and Agriculture, U.S. Department of Agriculture, under award number 1013351, and the state of New Hampshire. This work also has been funded by the USDA Forest Service via a Forest Health Monitoring grant. Researchers have worked closely with USDA Forest Service forest pathologist Dr. Isabel Munck and state forest health cooperators in New Hampshire, Maine, Massachusetts, and Vermont. The following researchers and institutions also are involved in this project: Dr. Matthew Vadeboncoeur, Dr. Mark Ducey, and Steve Eisenhaure with UNH; Dr. Kirk Broders and Stephen Wyka with Colorado State University; Dr. Brett Huggett with Bates College; and Dr. William Livingston with the University of Maine.