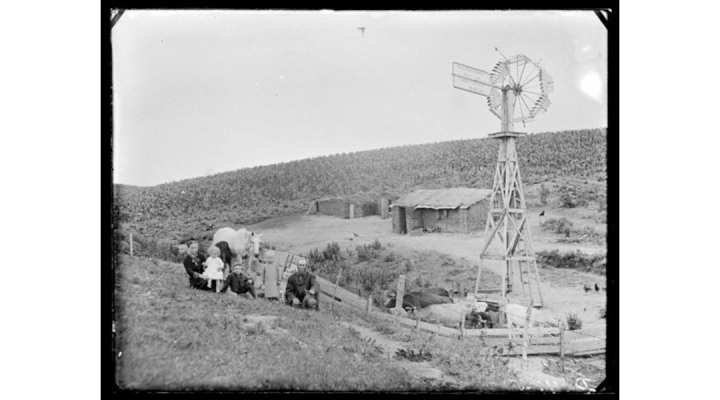 Joseph Beckwith sod homestead in 1888. (Photographer: Solomon D. Butcher. This is photo is from LOC via Nebraska State Historical Society.)

GREENWICH, N.Y. — May 20, 2022 marked the 160th anniversary of the enactment of the Homestead Act. This piece of legislation played a key role in U.S. agriculture and is considered by some to be one of the most important pieces of legislation in U.S. history.

The Homestead Act, which was signed into law on May 20, 1862 by President Abraham Lincoln, opened up millions of acres of government-owned land to private citizens. At the time of its passage, the western half of the United States was broken up into vast territories apart from the established states of California and Oregon. Politicians believed opening up public domain lands would encourage expansion, help the country through increased agricultural and economic output, and spread the ideal of the “yeoman farmer” which held that independent farmers were the basis of American values.

However, previous efforts to open government land were denied mainly because of the issue of slavery. Southern politicians feared that settlement would lead territories to be controlled by anti-slavery farmers and would prevent the spread of slavery, so their opposition killed legislation that sought to improve homesteading. But, after the South’s secession in the Civil War, the Homestead Act was able to be implemented.1

Under the Homestead Act any U.S. citizen, or intended U.S. citizen, could file an application and lay claim to 160 acres of land. There were some stipulations though. The applicant had to be the head of household and/or at least 21 years old, an applicant could not have fought against the United States at any time, and the applicants must live on and work the land for five years before they could file a deed of title and officially claim it as their own. There was also the option of working the land for six months and then paying $1.25 per acre to own the land, but this was not financially feasible for most homesteaders.2

A man named Daniel Freeman is credited with being the first person to file a land claim on January 1, 1863 for a parcel in Nebraska. From then on people of all kinds filed claims with the vast majority of them happening in between 1862 and the early 1900s. The people most associated with homesteading are the “sodbusters” who settled in the Great Plains. These homesteaders set about plowing the plains growing crops like wheat, corn, flax, barley, and oats.3 Homesteaders settled in areas further west too. Many areas of the American Southwest were settled by homesteaders of Latino and/or Hispanic descent. Others went further north into the Rocky Mountain regions. These more arid and rugged regions produced crops like beans, potatoes, and vegetables, in addition to smaller amounts of corn and wheat.4

Life as a homesteader was not easy. Homesteaders often lived in small cabin-like homes or sod houses/dugouts depending on the region in which they lived. Physical conditions did not make farming easy in the soddy Great Plains or arid parts of the West. Homesteaders encountered extremes in the weather from heat in the summers to blizzards and cold in the winter. Storms, dust, prairie fires, and insects were threats as well. “Fever n’ ague” (which turned out to be malaria) and other illness affected homesteaders too. Isolation and loneliness were other difficulties homesteaders faced on the vast landscapes sometimes miles from the closest neighbor.5

As a result of these hardships many homesteaders were unable to fulfill their 5-year commitment to the claims. The failure of some homesteaders, and the ambiguous framing of the act led the act to be taken advantage of at times with land speculators, railroads, miners, loggers, and others acquiring vast amounts of land through the act. Many homesteaders ended up coming from places close to newly opened areas such as Minnesotans moving to the Dakotas, or Iowans moving to Nebraska.6 It is also important to note that the Homestead Act led to the further dislocation and resettlement of Native American tribes. While the act effected tribes to varying extents based on location, overall, it did lead to more Native Americans being relocated from ancestral territory to allocated reservations.7

Despite these shortcomings of the Homestead Act, for many the it did set out to accomplish its intentions. A unique characteristic of the Act was that it was open to any person who was willing to adhere to its stipulations, and people of all kinds were able to start new through the act. Farmers or other laborers from the east were able to try their hand at farming in the west. Many newly freed slaves from the South (known as Exodusters) or formerly escaped slaves from Canada used the act as a way to start a new life working of their own accord. Many immigrants used the act as a path to citizenship and a new life in the United States. As was previously mentioned many Latino and/or Hispanic immigrants homesteaded in the Southwest, while a wave of German and Scandinavian immigrants ended up homesteading in the Midwest. The list goes on and on. Millions of people took the opportunity the Homestead Act offered and each has a story to tell.8

Homestead claims slowed in the early 20th century dropped sharply after the passage of the Taylor Grazing Act in 1934. The act remained in affect until 1976 when it was repealed with the passage of the Federal Land Policy and Management Act. However, homesteading was permitted in Alaska for an additional ten years. The last official land patent under the Homestead Act was received by a man named Kenneth Deardorff in 1988 in southwestern Alaska. In the course of its lifespan homesteading occurred in 30 of the 50 states and around 270 million acres, about 10% of the area of the U.S., was claimed and settled.9

Like most legislation the Homestead Act has a complex legacy that brought about changes that are still felt to this day. The Act transformed the environment of some parts of the country. Places like the Great Plains which had been open prairie for centuries was cultivated into farmland which is still in use today. The Act furthered westward expansion which led to the rapid succession of territories becoming states in the late 19th century. For some this was good allowing for new opportunities. For others it brought more hardship and loss. The Act also brought new people to the United States. The Homestead Act was accommodating to and encouraged immigration which added new groups to the American “melting pot.” Today, around 93,000,000 Americans are descendants of homesteaders.