Subscribe
Home / National / The good side of stinging nettles 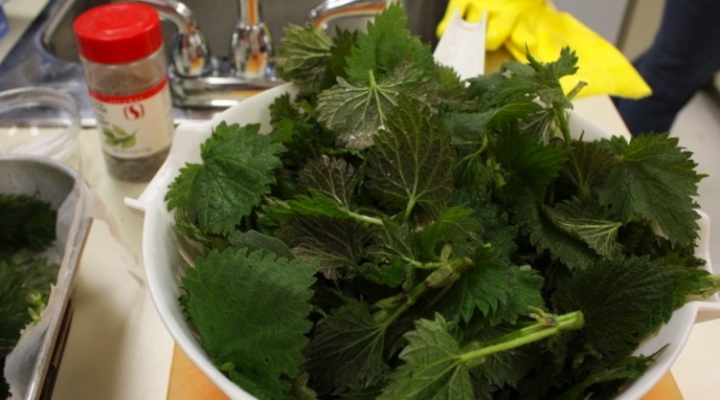 Stinging nettle does not seem like the kind of plant anyone would want to harvest, let alone put into their mouth. But putting on gloves takes care of the harvesting problem. And cooking or drying the plant removes the sting for eating. (Leslie Seaton, Flickr/Creative Commons)

WASHINGTON — At a time of year when weeds may be getting the better of you, what sweet revenge it is to turn them into an asset. Eat them!

And one of the best weeds for this purpose is stinging nettle.

Yes, that “stinging” in the name is off-putting, and rightly so. Grab a clump of stinging nettle leaves and stems in your bare hands and you’ll feel like you’ve been stung by a horde of angry ants or bees. That’s because the plant is covered with short, hollow hairs that are poised like miniature hypodermic needles. Their swollen bases are filled with formic acid, the same stuff that causes the pain of ant and bee stings. Even accidentally brushing against the plant is enough to inflict stings, and the pain could last a whole day.

Stinging nettle does not seem like the kind of plant anyone would want to harvest, let alone put into their mouth. But putting on gloves takes care of the harvesting problem. And cooking or drying the plant removes the sting for eating.

There are good reasons to go to the trouble of eating stinging nettles, beyond wanting to remove it from your garden. Stinging nettle is a healthful weed, or, shall we now say, healthful “vegetable.” It’s high in vitamins A and C, and in the minerals calcium and iron.

Stinging nettle also has a number of medicinal properties, including some anti-bacterial and anti-cancer properties. Poultices of nettle tea are said to soothe aching joints, and nettle has been used to treat urinary problems and offer some relief from hay fever.

Probably the most famous medicinal use of stinging nettle is for treating arthritis. The stinging seems to stimulate blood flow to afflicted areas when locally applied. (Interestingly, bee stings have also been used to treat arthritis.)

I’m not suggesting choking down stinging nettle as famine food or as medicine; the stuff also tastes good. I’ve enjoyed it as a tea and as cooked greens, the latter in the same way as spinach. If you aspire to loftier culinary heights, borrow some dishes from around the world: nettle beer from Britain or, from Ireland, nettle cream soup, which also calls for leeks, milk, butter and, of course, oatmeal. The best season to harvest nettles is now, in spring, when the shoots and leaves are young and tender.

If you don’t know the plant, you probably don’t want to discover it by accidentally brushing up against it. So here’s what to look for: a stem 4 to 6 feet high with pointed, somewhat heart-shaped, toothed leaves directly opposite each other at each node along the stem. The leaves are smooth on their upper sides, their stinging hairs on the undersides. The flowers and the seeds that follow are both small, and appear in branched clusters that emerge where leaves join the stem.

Don’t flog yourself too much for letting this weed find its way into your garden. You’re a good gardener. Stinging nettle is a weed of damp, rich soils. Now, if only I could find some use for creeping Charlie and quackgrass, two other weeds of damp, nutrient rich soils.