Subscribe
Home / National / The future of CRISPR technology in crops 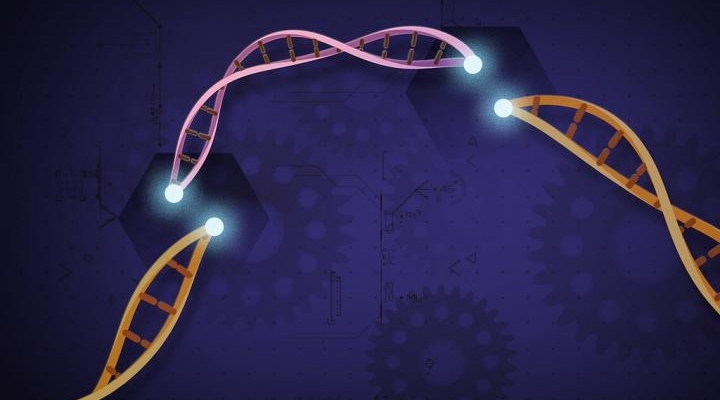 CRISPR is often thought of as 'molecular scissors' used for precision breeding to cut DNA so that a certain trait can be removed, replaced, or edited, but Yiping Qi, assistant professor in Plant Science & Landscape Architecture at the University of Maryland, is looking far beyond these traditional applications in his latest publication in Nature Plants. (National Institutes of Health, public domain)

BALTIMORE — CRISPR is often thought of as “molecular scissors” used for precision breeding to cut DNA so that a certain trait can be removed, replaced or edited, but Yiping Qi, assistant professor in Plant Science & Landscape Architecture at the University of Maryland, is looking far beyond these traditional applications in his latest publication in Nature Plants. In this comprehensive review, Qi and coauthors in his lab explore the current state of CRISPR in crops, and how scientists can use CRISPR to enhance traditional breeding techniques in nontraditional ways, with the goal of ensuring global food and nutritional security and feeding a growing population in the face of climate change, diseases, and pests.

With this new paper, Qi highlights recent achievements in applying CRISPR to crop breeding and ways in which these tools have been combined with other breeding methods to achieve goals that may not have been possible in the past. He aims to give a glimpse of what CRISPR holds for the future, beyond the scope of basic gene editing.

“When people think of CRISPR, they think of genome editing, but in fact CRISPR is really a versatile system that allows you to home in on a lot of things to target, recruit or promote certain aspects already in the DNA,” Qi said. “You can regulate activation or suppression of certain genes by using CRISPR not as a cutting tool, but instead as a binding tool to attract activators or repressors to induce traits.”

Additionally, Qi discusses the prospect of recruiting proteins that can help to visualize DNA sequences, and the potential for grouping desirable traits together in the genome. “I call this gene shuffling,” Qi said. “This is designed to move very important trait genes close to each other to physically and genetically link them so they always stick together in traditional crossbreeding, making it much easier to select for crops with all the traits you want.”

These are just some of the examples of future directions Qi hopes to cultivate and draw more attention to with this paper. “I hope this review [in Nature Plants] will open eyes to show that there is a lot to be offered by CRISPR, going beyond the current status of genome editing, but also outside of just editing to see where the whole field can lead down the road.”

This includes the process of taking CRISPR applications in animals and humans and applying them to crops in ways that haven’t been done before. For example, CRISPR technology has already enhanced screenings for genes and traits in human health by using a library of tens of thousands of guide molecules that are tailored for targeting selected gene sets at the genome scale. This system could be potentially used in plants to screen for traits that contribute to disease and pest resistance, resiliency, and crop yield. “This not only helps with breeding, but also helps categorize gene functioning much more easily,” Qi said. “Mostly, these studies have been done in human cells, and crops are lagging behind. I see that as one future aspect of where plant science can harness some of these different applications, and my lab has already been doing some of this work.”

Qi’s lab has published multiple original research papers this year that highlight some of the differences for CRISPR applications in human and plant cells. Earlier this year in Molecular Plant, Qi, his graduate student, interns, and collaborators published findings testing the targeting scope and specificity of multiple CRISPR Cas9 variants. Qi’s team sought to prove or disprove claims made in humans about the fidelity and specificity of these tools in rice. “Not all claims that are made for CRISPR functionality in humans and animals are going to be true or applicable in plants, so we are looking at what works and what we can do to optimize these tools for crops.”

Another recent paper in BMC Biology as part of a collaborative research effort investigated temperature as a method of improving efficiency of CRISPR Cas12a genome editing in rice, maize, and Arabidopsis, which was found to need higher than ambient temperatures to boost editing efficiency. “Human cells are always maintained at higher temperature which may be optimal for CRISPR to work, but is pretty hot for plants,” Qi said. “We have to explore how that temperature plays a role for CRISPR applications in other species.”

Qi also published the first ever book dedicated entirely to Plant Genome Editing with CRISPR Systems, highlighting cutting-edge methods and protocols for working with CRISPR in a variety of crops.

“This book is really gathering together specific applications for many different plant systems, such as rice, maize, soybeans, tomatoes, potatoes, lettuce, carrots — you name it — so that people working in their own plant of interest may find some chapters quite relevant. It is designed as a protocol book for use in the lab, so that anybody new to the field should be able to figure out how to work with CRISPR in their particular plant.” Qi was contacted by the publisher in the United Kingdom, Humana Press, to produce and edit the book. It was released earlier this year as part of the Methods in Molecular Biology book series, a prominent and respected series in the field.

“How to feed the world down the road — that’s what motivates me every day to come to work,” Qi said. “We will have 10 billion people by 2050, and how can we sustain crop improvement to feed more people sustainably with climate change and less land? I really think that technology should play a big role in that.”

— University of Maryland
via EurekAlert!

Efforts aim to increase legal immigration to US