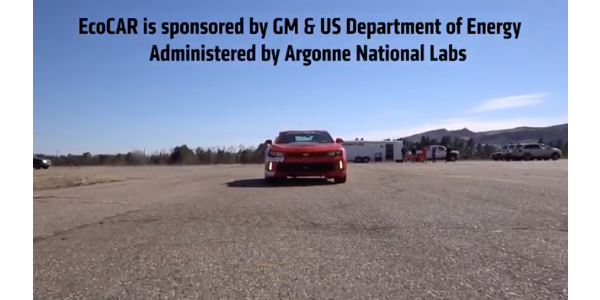 Following a series of judged events May 10-22, a winner will be crowned for EcoCAR 3, one of the nation's premier Advanced Vehicle Technology Competitions. (Screenshot from video)

FORT COLLINS, Colo. — Labor of love. Blood, sweat and tears. No cliche could encompass what a dedicated group of students has accomplished these past four years as members of EcoCAR 3.

In a few weeks, Colorado State University student engineers will bring an Aggie-orange Chevrolet Camaro to Arizona and California to embark on the final lap of a grueling four-year journey. Following a series of judged events May 10-22, a winner will be crowned for EcoCAR 3, one of the nation’s premier Advanced Vehicle Technology Competitions. It is the third such competition sponsored by the Department of Energy and General Motors, and managed by Argonne National Laboratory.

Selected back in 2014, 16 university teams were given a brand-new 2016 Chevrolet Camaro. They were tasked with converting this classic American muscle car into a more environmentally friendly vehicle, using all the latest green technologies, without sacrificing performance. EcoCAR 3 pushes for innovation, demands showroom-ready cars at the end, and engages experienced students ready to become industry leaders.

CSU’s history of involvement in advanced vehicle competitions dates back three decades; CSU was one of 15 universities that participated in a 1988-89 alternative fuels competition called the Methanol Marathon. CSU also sent a team to EcoCAR 2, which wrapped in 2014. One of the team’s faculty advisors, mechanical and systems engineering associate professor Tom Bradley, has spent his career researching automotive, aerospace and energy systems.

For Jamison Bair, a master’s student in mechanical engineering and the team’s project manager, bringing the CSU EcoCAR 3 from design to reality has been worth the long hours and technical headaches. He joined the team in 2015, while he was an undergraduate.

Getting the opportunity to provide leadership and see the project through “from cradle to grave,” has been beyond rewarding for Bair. “It has been a huge part of my life.”

CSU’s revamped Camaro is a P2 parallel hybrid plug-in electric vehicle. It has an inline four-cylinder engine that’s coupled with a racing clutch to a 150-kilowatt electric motor. This combination gives the car 380 engine horsepower, with the added ability to run in electric-only mode. Using clean-burning E85 ethanol fuel, the car has a combined range of 200 miles –­ a 30- to 35-mile-per-gallon equivalent.

Way back in year 1 of the competition, the students unveiled the design of the car’s unique architecture. The powertrain has a through-shaft that connects the gasoline engine to an electric motor, allowing for both electric-only mode and hybrid mode – for fuel efficiency plus performance.

“It was an entirely student-designed powertrain,” Bair said. “It’s truly one of a kind.”

WATCH: EcoCAR 3 gears up for competition

Central to the sponsors’ goals for EcoCAR 3 was to push the boundaries of autonomous vehicle capabilities. To that end, CSU EcoCAR 3 included an Advanced Driver Assistance Systems sub-team, made up mostly of electrical and computer engineering students, and led this year by student Yi Wang. They’ve worked on computer vision algorithms and data-processing systems to integrate cutting-edge, semi-autonomous features into the car. These include object and lane detection, as well as LIDAR (light detection and ranging) and radar (radio detection and ranging) sensors.

Feedback systems like these make the driver safer on the road, explained Jordan Tunnell, a graduate student in computer engineering and an adviser for EcoCAR 3. Tunnell started working on the EcoCAR 3 Advanced Driver Assistance Systems team as an undergraduate. His interest in these types of systems stretches back even further.

“Since I was a high schooler, I wanted to work on autonomous car technology,” Tunnell said. “I personally like the machine-learning aspect of the project, where we teach computers to learn to identify objects in an image. I especially enjoy driving around with a camera strapped to the car, and seeing our computer vision algorithms working for the first time.”

Advising this project is Sudeep Pasricha, Monfort Professor and associate professor of electrical and computer engineering. The purpose of this project, says Pasricha, is to “bring autonomous driving closer to reality.” It’s a key direction for the automotive industry as a whole, and once again, CSU wants to be in the driver’s seat of those efforts.

Beyond the cameras, radars and intelligent machine learning algorithms that give the CSU Camaro autonomous capabilities, modern cars are as much about computing power as they are about mechanical prowess. More than half of the EcoCAR team hardly works on the car at all, but rather on the systems that allow the car to operate in an optimal manner.

Marco Peyfuss, a fifth-year senior mechanical engineer, leads the EcoCAR controls and systems modeling and simulation team. That team was responsible for simulating every aspect of the vehicle’s design, and developing all the control codes to harness the engine, transmission and countless other pieces to work together seamlessly.

“We’ve had great forward progress,” said Peyfuss, who will work for Honda Research and Development after graduation in May. “We’ve been so happy to see the correlation between our models and the results.

For the year 4 competition that starts May 10, the cars will first undergo rigorous safety inspections at GM’s Desert Proving Grounds in Yuma, Arizona. Dynamic events in emissions testing, drive quality and handling will follow.

From there, they’ll move to southern California, where the students will drive their cars at the Auto Club Speedway track in Fontana for events in Autocross, acceleration and braking.

After presentations to industry and government judges in Pomona, California, they’ll embark on a 150-mile, open-road course through Los Angeles County, where the Camaros will be evaluated for city and highway driving and fuel consumption. They’ll end up in Hollywood, where they’ll be judged in 40 categories. An overall winner will be announced May 22.

During year 3 judged events, the CSU team earned multiple top-8 finishes as well as a sportsmanship award, voted on by the 15 other competitor schools.

Stop by the EcoCAR 3 display on the Lory Student Center Plaza during E-Days, April 12.

Get a glimpse of what it takes to compete in EcoCAR 3. Video by Ron Bend.

What is in your toolbox for weeds?