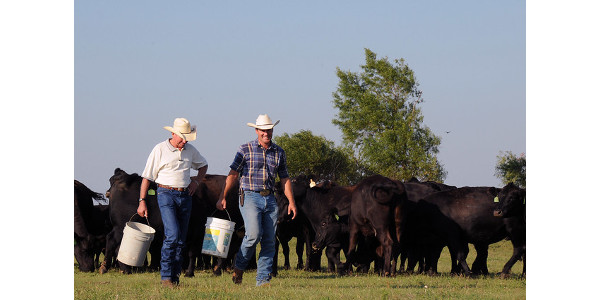 MANHATTAN, Kan. — For John and Berna Mae Stegman, the recent loss of their son, Bernard, in an accident has brought heartache and grief. It’s also underscored the fact that family extends beyond kinship.

John was surprised by the number of cards, calls and visitors his family received from his connections made in Kansas Farm Bureau in the wake of Bernard’s death. The volume of condolences was almost overwhelming,

“I just want to thank all the people who took the time to send a card, give me a call or whatever,” John said.

Bernard didn’t just reside in Spearville, he helped cultivate a community there with his wife, Debra, and their three sons. Farming was all he ever wanted to do – so much so that he opted to stay close to home for college so he could work on the farm in the afternoons. He graduated from St. Mary of the Plains in Dodge City.

Under that partnership, the farming operation flourished from “a small acreage to a considerable size now,” in addition to growing a herd of registered Angus. Bernard also found the time to serve the Spearville community through his church, the local school board and professional groups.

Bernard also is the reason John was able to serve on Kansas Farm Bureau’s board of directors, representing 11 counties in southwest Kansas.

“I spent 20 years on that Farm Bureau board, and it was because Bernie was at home and he took care of everything when I wasn’t there,” John said. “He was just my best friend and my buddy. He knew everything about the farm.”

John’s tenure on the Farm Bureau board ended in 2010, but the connections are still strong.
“The amount of people you meet in 20 years is just unbelievable,” John said. “We get these cards from all over the state. We had some of the past directors come out (for the funeral). I didn’t get to see everybody because the church was full, the parish center was full.”

There are smaller injustices in Bernard’s death, like the new barn he’d recently completed, the culmination of years of work to make the farm as productive as possible.

“He just about had everything the way he wanted it, but he doesn’t get to enjoy it,” John said.

Instead, John said he’s going to embark on a new partnership with his three grandsons who all desire to be back on the farm.

“We’ll have to see if we can make this thing work so that everybody’s got some income – can make a decent living.”

With the numerous relationships John has built through Kansas Farm Bureau, there’s plenty of family standing by ready to help.