Subscribe
Home / National / The evolution of the domesticated tomato 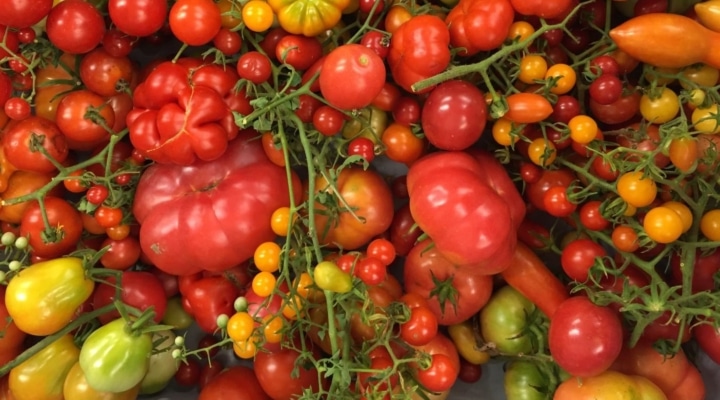 Evolutionary biologists and geneticists at UMass Amherst report that they have identified missing links in the tomato's evolution from a wild blueberry-sized fruit in South America to the larger modern tomato of today. (University of Georgia/Alexis Ramos)

AMHERST, Mass. — In a new paper, a team of evolutionary biologists and geneticists led by senior author associate professor Ana Caicedo, with first author Hamid Razifard at the University of Massachusetts Amherst, and others, report that they have identified missing links in the tomato’s evolution from a wild blueberry-sized fruit in South America to the larger modern tomato of today.

The missing link that deserves more attention than it has gotten to date, they say, is one of a number of intermediate variants between the fully wild and fully domesticated tomato. Results of their genetic studies indicate that the modern cultivated tomato is most closely related to a weed-like tomato group still found in Mexico rather than to semi-domesticated intermediate types found in South America.

Razifard, a postdoctoral researcher in the Caicedo lab, says, “What’s new is that we propose that about 7,000 years ago, these weedy tomatoes may have been re-domesticated into the cultivated tomato.” The common cultivated tomato is the world’s highest value and most widely grown vegetable crop and an important model for studying fruit development, Caicedo and colleagues point out.

In this work, part of a larger research effort supported by the National Science Foundation and led by Esther van der Knaap at the University of Georgia, the researchers say that for many years an oversimplified view of tomato domestication was thought to involve two major transitions, the first from small, wild Solanum pimpinellifolium L. (SP) to a semi-domesticated intermediate, S. lycoperiscum L. var. cerasiforme (SLC). The second was a transition from an intermediate group (SLC) to fully domesticated cultivated tomato (S. lycopersicum L. var. lycopersicum (SLL)).

Their genetic studies address the role of what they call a “historically contentious” and complex intermediate stage of tomato domestication, an essential chapter that should not be overlooked in the tomato’s long journey from wildness to domestication. Details appear in an Advanced Access edition of Molecular Biology and Evolution.

Razifard and colleagues, who created a public genomic variants dataset for this study, used whole-genome sequencing of wild, intermediate and domesticated (SP, SLC, and SLL) varieties, plus population genomic analyses to reconstruct tomato domestication, focusing on evolutionary changes especially in the intermediate stages (SLC). They generated new whole-genome sequences for 166 samples, with particular attention to intermediate variants from its native range and cultivated fruit from Mexico, previously under-represented in studies.

Razifard says, “We found that SLC may have originated in Ecuador around 80,000 years ago as a wild species rather than a domesticate. It was cultivated in Peru and Ecuador by native people later to create medium-size tomato fruits. We also found that two subgroups from the intermediate group may have spread northward to Central America and Mexico possibly as a weedy companion to other crops.”

“Remarkably, these northward extensions of SLC seem to have lost some of the domestication-related phenotypes present in South America. They still grow in milpas of Mexico, where people use them as food although not cultivating them intentionally,” he adds. Milpas are fields where farmers plant many different crops in the same area.

He and Caicedo note that an origin of the domestic tomato from weed-like ancestors was proposed in 1948 based on the many native names that exist for the weed-like tomato, in contrast to fewer names for the common cultivated tomato. This hypothesis was challenged by others who argued against Mexico as a center of tomato domestication due to the absence of completely wild tomatoes there.

Razifard says, “It’s still a mystery how tomatoes have moved northward. All we have is genetic evidence and no archaeological evidence because tomato seeds don’t preserve well in the archeological records.”

The researchers point out that exploring intermediate stages of tomato domestication has “direct implications for crop improvement.” For example, they observed some signals of selection in certain intermediate populations for alleles involved in disease resistance and drought tolerance, important, Razifard says, “Such evidence is useful for finding candidate alleles that can be used for creating disease-resistant and/or drought-tolerant tomatoes.” Other intermediate populations had higher beta-carotene or sugar content, attractive traits to consumers.

The evolutionary biologist says, “This is the kind of paper that Darwin would have enjoyed reading. He drew many of his insights on evolution from studying plants, especially crops. He corresponded extensively with botanists before he finalized his theory of evolution through natural selection.”

A postdoctoral researcher who did much of the population genomic analyses for this project, Razifard adds that he wants to support the movement in biology against “plant blindness,” the tendency to ignore the importance of plants in studying evolution as well as other subfields of biology. Also, he is from a minority Azerbaijani-speaking area of Iran and says, “This paper is special to me because it’s my first one with a female-majority author list. I feel lucky to be part of a generation that is changing science, and I hope this paper serves as a model for gender equity in STEM fields.”

–University of Massachusetts Amherst
via EurekAlert!