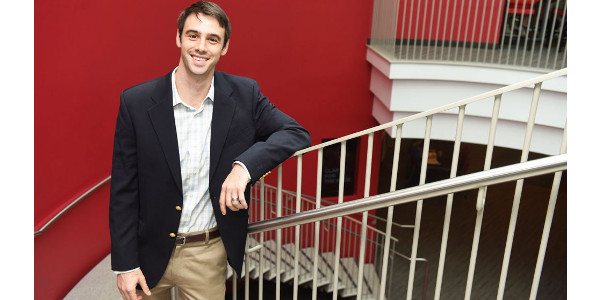 Jones earned his bachelor’s degree in food and resource economics from the University of Florida, then his master's in agricultural economics at Purdue University. He chose the Department of Agricultural and Resource Economics at CALS for his Ph.D. to study how new forms of agricultural biotechnology can impact farmers and society. (Courtesy of NC State University)

RALEIGH — The academic journey of Florida native Mike Jones spans Peruvian potato fields and the irrigated deserts of Syria to arrive where Jones is today: on NC State’s campus, a Ph.D. student investigating the impacts and public perception of cutting-edge agricultural technology.

Jones earned his bachelor’s degree in food and resource economics from the University of Florida, then his master’s in agricultural economics at Purdue University. He chose the Department of Agricultural and Resource Economics at CALS for his Ph.D. to study how new forms of agricultural biotechnology can impact farmers and society.

Last month, CALS Dean Richard Linton invited Jones to be part of a panel of experts discussing what’s next for CALS, our state and our nation. We caught up with Jones to talk about his impressive body of work and his thoughts on the future of his own research.

Did you grow up on a farm?

No, and that’s always something I’m trying to overcome. I saw potato fields for the very first time while I was in Peru doing research as an undergraduate. It really struck me, because it was more than just pretty flowers in a garden — it was someone’s entire livelihood on two acres.

How did you develop an interest in agriculture?

It was by complete accident. I was a political science major at first, in an honors program where a professor in food and resource economics encouraged me to take his class. I thought it was amazing. The applied economics field has a very tangible focus. Instead of focusing on a cloudy “market,” there were tangible products.

At the University of Florida, I did a lot of international travel — east Asia, southern Africa, Latin America, Europe and the Middle East back when Syria was safer than Miami. I did work there in low-irrigation crops that grow in the desert.

My interest when I was at Purdue was how small farmers, especially in the developing world, can use technology — simple things like high-density plastic bags that can be manufactured in developing countries to store corn, beans and black-eyed peas — to keep the food completely safe from insects. The Gates Foundation supported the effort and I got to be part of a project that reached millions of people.

What are you working on right now?

Two very distinct projects, with a common thread of how new forms of agricultural biotechnology can impact farmers and society.

One is in The Philippines, looking at data tracking the same farmers over multiple years. My interest is in how farmers there are able to increase yields with genetically modified varieties, and why certain types of farmers are more able to than others. A lot of people say that “on average,” yields increased, but I’m interested in the nuance of who gains the most as other developing countries consider whether to allow farmers to grow genetically modified crops.

In the United States, I’m looking at genetically modified insects. One of CRISPR’s uses is through gene drives, where they can make genetic changes that are inheritable and can be passed on and theoretically spread through an entire insect species population.

We noticed that everybody was talking about how the public might react, but we still needed in-depth studies on what the public actually thinks. With Zachary Brown, who’s the principal investigator, and a team from NC State and the University of Wisconsin-Madison, we’re taking proposed agricultural applications and doing a large-scale survey using USDA funds, looking at how people feel about the different uses of gene drives to reduce insect damage and how they might impact consumers. If gene drive insects are used in the field as replacements for pesticides, that could be seen as a good thing because you’re using less pesticide. But if there’s any sort of negative reaction in the market, if people draw away from it the way some are drawn away from genetically modified crops, it’s unclear whether that’s a net win for farmers. New, unexplored technology — there’s so much money going into it, but nobody knows what the public thinks.

Any of these discussions on new cutting-edge technology sooner or later circle back to economics. It’s not just a question of tacking up all the costs and benefits and seeing if one outweighs the other.

What’s next for agricultural economics?

My discipline does have a bright future. I think we sometimes react to past events and try to dissect how things went, but we also can have much to say about how things might go. We can be involved in crafting policy for these cutting-edge technologies, looking at how we can move forward successfully.

My interest in this field is really when we work hand in hand with people from other disciplines. I would love to surround myself with people from many disciplines, where I can give informed perspectives on how markets may react to certain things and how incentives may be pushing people to behave in unexpected ways.

Get farming this Fall with OGS fall & winter programs
June 23, 2021