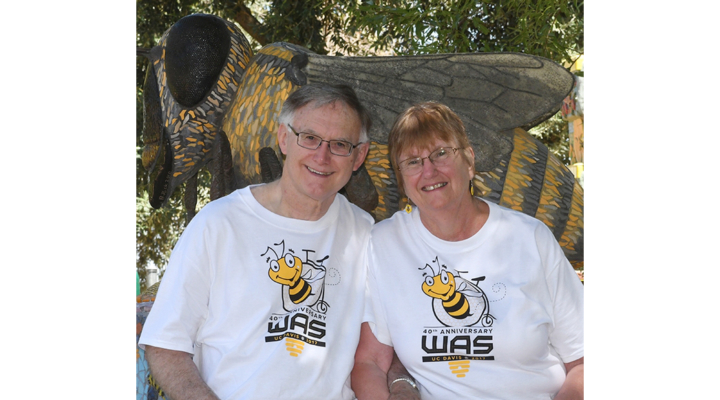 Eric Mussen, WAS president, and his wife, Helen, who is assisting him in his presidency, sit next to Miss Bee Haven, a sculpture that anchors the Häagen Dazs Bee Haven at UC Davis. The sculpture is the work of Donna Billick. (Photo by Kathy Keatley Garvey)

“We wanted a design depicting a honey bee riding a penny farthing or high wheel bicycle,” Mussen said, noting that Davis has been described as the “Bicycle Capital of the United States” (due to the city’s “high rate of bicycle use and its long history providing its thousands of pedalers with a cyclist-friendly environment”–David Takemoto-Weerts).

“We wanted something cartoonish,” added Mussen, who is serving his sixth term as president. WAS was founded at UC Davis by Norm Gary, Mussen and  Becky Westerdahl. Gary, now professor emeritus, UC Davis Department of Entomology and Nematology, spearheaded the founding.

Eric Mussen knows bees. He retired in 2014 after 38 years of service, culminating a career that drew national and international attention.

Dana, a 1987 graduate of California Polytechnic Institute (Cal Poly), has worked at UC Davis and the UC Davis Medical Center as a graphic designer and illustrator for more than 25 years. A lifelong resident of Dixon, he also has a freelance graphic design and illustration business that he’s owned since 1990.

“I grew up on a farm just east of Dixon, and rode motorcycles and sketched cartoons whenever possible, always wishing that I could be as good as my older brother, Jim,” Steve recalled.

Bees buzzed in Steve Dana’s poster for the 2016 Dixon May Fair. The theme: “Buzzing With Excitement.”

Today Steve specializes in publication and logo design as well as cartoon and medical illustration–and has illustrated three children’s books with author and fellow Dixon High School graduate, Karen Emigh.  Among his biggest fans are wife, Jodi, his wife of more than 26 years, and their two children, Eric and Kelsey.

Steve said his parents both enjoyed various forms of art from acrylic painting to metal sculpture and his nephew Sutton Betti is a professional sculptor in Colorado.

No stranger to bees, Steve created the popular logo for the Dixon May Fair’s 2016 theme, “Buzzing with Excitement.” He considers it “my favorite” of the seven posters he’s generated for the fair.

Mussen predicts the WAS t-shirt also will become a favorite. And come Sept. 5, many of those attending the WAS conference will be wearing one.

WAS, a non-profit organization, represents mainly small-scale beekeepers in the western portion of North America, from Alaska and the Yukon to California and Arizona.  Beekeepers across North America will gather to hear the latest in science and technology pertaining to their industry and how to keep their bees healthy.

The conference is open to all interested persons. Among the speakers is Kim Flottum, editor of Bee Culture. See schedule of speakers and register at www.westernapiculturalsociety.org.

Farmers take the mystery out of meat