Home » The buzz about native bees 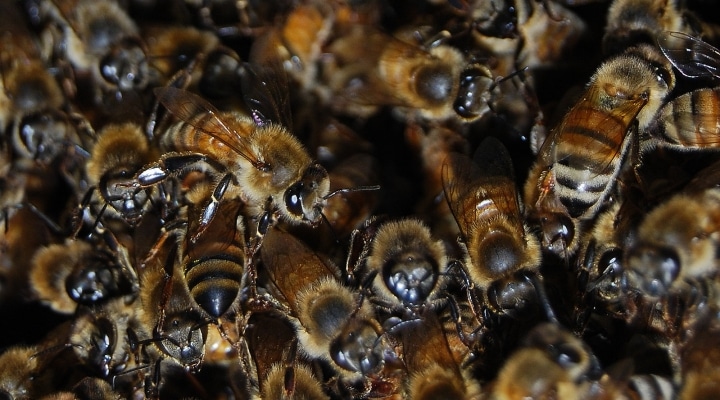 “North Carolina has more than 560 different species of native bees,” Levenson said. “A lot of people know honey bees and bumblebees and maybe carpenter bees, but there are so many different kinds of bees. There are teeny, tiny dark sweat bees that people often mistake for flies. There are shiny, green bees. They all have different nesting requirements. They all have different flowers they prefer to go to. Doing one thing is not going to help all of the species, but planting a mix of flowers in your yard or on otherwise unusable land can support many different species.”

Levenson has spent the past four years collecting and identifying bees from small plots of wildflowers planted at the 18 research stations operated by NC State and the North Carolina Department of Agriculture and Consumer Services (NCDA&CS). Because of the network of research stations, she is able to study bees in a broad array of different climates – from the mountains 3,200 feet above sea level to the coast and from the rich Blacklands to the dry Sandhills.

She collects bees from 15 of the 18 research stations as well as the Lake Wheeler Road University Field Lab.

Since the summer of 2016, she has spent untold hours netting bees. In fact, she visits each of 12 locations once a month for four months each spring and summer. She typically brings a couple of co-workers, and they can catch up to 200 bees in an hour.

So far, she has found that the flower plots, which are typically less than a half-acre, have increased the number and diversity of native bees. Thick, richly blooming plots of diverse flowers attract more bees than scraggly or withered plots.

Some scientists were concerned that the flower plots might increase the spread of bee diseases — like an elementary school classroom during cold and flu season.

Levenson says she has not found any evidence that the plots are increasing the transmission of bee diseases. She has detected various viruses and other pathogens in bees at the plots, but they do not seem to be spreading between species because of the plots. Also, plots of diverse flowers — such as those from commercial seed mixes including the American Meadows mix — support bee populations with fewer pathogens than plots with only a single type of flower, such as only sunflowers.

Last summer she started a new project to see if the pollinator plots increase the yield of nearby soybean fields. She doesn’t have the results yet, but she did find 23 different species of native bees in the soybean fields.

Over the past four years, she has had to teach herself how to identify the many different species of native bees. She is sharing her knowledge with North Carolina residents in the form of a bee identification guide, which includes details on the size, months of peak activity and characteristics like wing veins, coloration and location of pollen-carrying hairs.

“To my knowledge this is the only project that has looked at bees on such a large scale across the whole state,” Levenson said. “That’s really unique and it’s definitely due to the great network of research stations that exist here and the fact that they were all willing to work with me. I wouldn’t have been able to do it without these research stations and the super helpful people who work there.”

She has worked with station superintendents, administrative assistants and research specialists such as Lloyd Ranson, the superintendent of the Border Belt Tobacco Research Station. Her on-station helpers place brightly colored cups filled with soapy water out in the flower plots one day a month during the summer, and Levenson collects and identifies the captured bees later.

In addition to the bee identification guide, Levenson will share the results of her research with the scientific community in the form of several academic papers. Her graduate mentor is David Tarpy, who is NC State’s honey bee expert.

Levenson’s research was primarily supported by a grant from NCDA&CS with additional support from Southern Sustainable Agriculture Research and Education, The Garden Club of America and Syngenta.

USDA to collect data for 2019 census of horticulture specialties