Home » The ‘bread basket’ of the tropics? 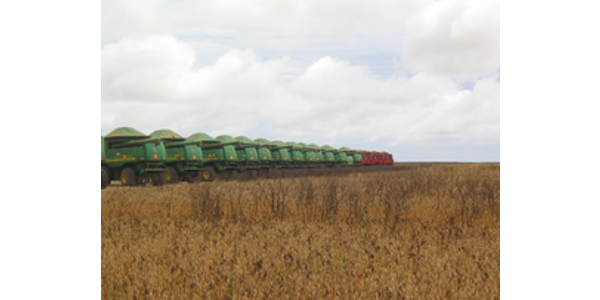 Farmers in central Brazil are running productive farm businesses, largely due to a new tropical system of production known as safrinha, or succession farming, which results in two large crops—soybean and maize—per year. (Courtesy of Mato Grosso)

URBANA, Ill. — It wasn’t until the late-1990s that the tropics began to emerge as a possible region for growing grain crops, particularly soybean. But, today, farmers in central Brazil are running productive farm businesses, largely due to a new tropical system of production known as safrinha, or succession farming, which results in two large crops—soybean and maize—per year.

Agricultural economists at the University of Illinois wanted to learn more about the productivity of grain production in this tropical area. In a study published in the International Journal of Agricultural Management, they examine input and output factors for several large-scale farms located in the state of Mato Grosso, Brazil.

“Mato Grosso, where this research is set, is by the far the largest geographical state producing soybean in the world,” says Peter Goldsmith, a professor in the Department of Agricultural and Consumer Economics at U of I and lead author of the study. “They far surpass Illinois or Iowa as a state, and the yields are the same as in the U.S. But nobody 20 years ago thought you could produce soybean in the tropics.”

Historically, the tropics—defined as approximately 20 degrees north latitude and 20 degrees south latitude—has been one of the poorest parts of the world, with the lowest agricultural productivity, and some of the highest incidences of malnutrition, Goldsmith says. “The thought is that the ‘bread basket’ was outside that region and these regions would forever be food-importing regions. And, up until the late-1990s—not that long ago—nobody thought of the potential for the tropical world.”

But because of the phenomenon of these large-scale, high-producing farms in central Brazil, Goldsmith says it was important to look at these “new-age” farmers and how they behave in terms of producing soybean and maize. If, after all, tropical Brazil now produces 64 percent of the nation’s 114 million metric ton soybean crop, according to a 2018 study, how do they do it?

“It’s a very different sort of agriculture, which we describe in the paper, but the real point is that they have proven that you can engage broad-land production, just like we see in the Midwest or Argentina—large farms, large combines, mechanized, high yields, productive farms—in the tropics. That opens up a lot of new land. But it also opens up a lot of sensitive biomes, such as rainforests,” Goldsmith says, a prospect that can be controversial and requires serious environmental stewardship.

So one of the questions the researchers asked is whether these farmers are producing more by simply using more land. The answer is not necessarily. “The safrinha system allows you to double crop—succession crop—so you can double the output, in essence, without doubling agricultural land,” Goldsmith says. “That’s a real strength of tropical production, and some farmers are even producing a third crop on the same land in the same year.”

They also looked at the types and quantities of inputs the farmers use.

Analyzing data from 43 soybean/maize-producing farms in Mato Grosso—including costs, revenues, input quantities, and inventory values, as well as agronomic data and farm characteristics—the researchers determined whether the farms are factor-productive; whether they are producing more with fewer inputs.

“We wanted to know, for every unit of chemicals they use, how much output of grain do they produce. Or for every unit of fertilizer that they use, how much output do they get. We also asked that of fuel, labor, and machinery inputs,” Goldsmith says. “We show in the paper that, globally, an increase of outputs has occurred; we are much more factor-productive on average around the world due to an increase in the use of technology. This is not necessarily the case in the tropics of Brazil, except with respect to land.”

Overall, Goldsmith says agricultural output growth due to total factor productivity in Mato Grosso is low at 9 percent. Most of the growth, 64 percent, comes from greater usage of inputs such as chemical and fertilizer applications. This is not surprising for the tropics, where the pest pressure is much higher than in other parts of the world, such as the Midwest in the United States.

The results also show that farmers in Mato Grosso rely mostly on traditional inputs and extensifaction, over the adoption of new technologies. But that extensification using the safrinha system is unique to the tropics; more land but not a larger farming footprint.

“Tropical production is different, and we should be using different metrics to measure productivity,” Goldsmith says. “Technology usage is slower for a number of reasons, but low technology adoption rates don’t seem to affect growth, though. Successive cropping systems, which don’t require high technology for success, dramatically improve the productivity of the land.”

The results of the study lay some groundwork for policymakers, producers, and those in the agribusiness industry when thinking about agricultural expansion in the tropics.

“We make the case that if the tropical region is this new, high-growth area with potential for grain production—and large-scale production is very possible there—and if it’s the type of sustainable business we see in the Mato Grosso state of Brazil and other regions of South America, than these are important people and businesses for the future of the food system.

“There are significant positive implications for the future of global grain supplies and our ability to feed the large global population of 2050, as well as bringing rural economic development and the resulting poverty alleviation to many of the world’s poorest regions. This new business model has proven to be very successful and is here to stay,” Goldsmith says.

The study, “The productivity of tropical grain production,” is published in the International Journal of Agricultural Management. Co-authors include Peter Goldsmith and Krystal Montesdeoca. Goldsmith is a professor in the Department of Agricultural and Consumer Economics at U of I, director of the Food and Agribusiness Program at U of I, and is the principal investigator of USAID’s Soybean Innovation Lab centered at U of I.