Home » The best of unintended consequences 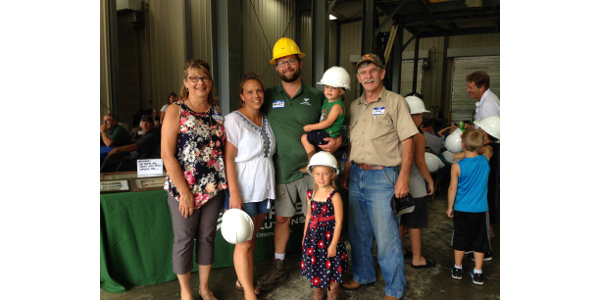 The Henry Huisjen family at the Open House in Summer 2018. (Courtesy of Ceres Solutions)

WHITE CLOUD, Mich. — It seems like a long time ago… and then sometimes it seems like just a few minutes ago. White Cloud Feed Mill Manager Henry Huisjen smiles as he reflects on the events of the last 24 months. Henry, who is understandably considered a relative newcomer to the feed industry, has had the opportunity to grow his leadership and operational experiences in a whirlwind this year, like few feed industry professionals have.

That’s because right around the time Henry assumed his role as Feed Mill Manager, transitioning after the retirement of experienced local manager Mike Dykstra, his employer Ceres Solutions Cooperative committed to a $13 million expansion. The investment would move feed manufacturing operations out of the confined space of downtown Fremont, where it had served for 100 years, and into a state-of-the-art facility 12 miles away in White Cloud.

Henry, born and raised in Newago County, knew this career experience would be the opportunity of a lifetime.

“After 100 years, we had reached a critical point in our journey: are we all in for local livestock producers for the long-term? If we are, we must refocus on three urgent priorities every day: assuring feed quality, consistency and biosecurity which can only be achieved by investing in a more capable and secure location,” remembers Henry. “Our board of directors made the investment, and we were determined that we would not disappoint our company or this community.”

The goal was set. The plans were prepared and supplier partners were chosen for the project. And like any project manager can tell you, Henry and Ceres Solutions Michigan Operations Manager Martin Hall encountered countless surprises and setbacks along the way. Long story short: the work crews put final touches on groundbreaking plans in White Cloud in the spring of 2016. By the spring of 2018, the facility was making feed. And now, in the spring of 2019, the location is exceeding production expectations. “We took a leap of faith, and we can’t thank our company, our customers and this community enough,” says Henry.

Huisjen reports that production is about 450 tons per day and the team is constantly looking at process analysis and nutritional systems to drive efficiencies. “The success is really at the hands of the employees– their enthusiasm for retraining and recreating our new normal in terms of service expectations for our customers,” he says. An additional accolade earned by the team is the recent Safe Feed Safe Food certification status that top manufacturers strive for in order to demonstrate their commitment to transparency and excellence. “We are making a better product, more efficiently, in a premier, safe workplace, and we hope the entire process has been seamless for our livestock customers.”

The facility produces 2,200 tons of feed per week and meets the demand of central Michigan hog, dairy and poultry customers for speed, flexibility, quality and biosecurity. The location has 90,000 bushels of storage and almost 40 ingredient bins. The automated load out bins—there are 18 of them–can hold 522 tons of segregated storage to meet a variety of livestock producer needs. The site can receive 7,500 bushels of grain per hour. As impressive as those numbers are, Henry is quick to point out, “We are only at 50 percent capacity, so we want producers to know we are ideally positioned to grow. This facility is capable of serving well for the next 100 years. We want to be part of the local livestock legacy for the long-term.”

It is obviously very rewarding as Manager for Henry to know that the White Cloud Feed Mill construction and launch project has achieved its goal to successfully serve customers. That was job one.

But as he reflects on the process, Henry recognizes several significant unintended consequences for which he is also thankful. First, as a new manager, he realizes in hindsight how the hardships and mishaps helped galvanize his team of 11 employees. “We wish we had kept a diary… it is comical to us now, and of course, no one was hurt which is most important, but some of the construction setbacks or frantic equipment start up issues had us looking at each other in disbelief… like, you can’t make this stuff up!”

A second unintended consequence was the opportunity for the team to learn so much so quickly about expert feed manufacturing in a facility of this size and scale. “We produced a quality product at Fremont. But this facility takes production to a whole new level. We would not trade this professional education experience in our careers for anything,” Henry says. “It was a baptism by fire, and we’re better for it.”

And finally, the investment in White Cloud by Ceres Solutions has started a resurgence of interest by other companies to invest in Newago County. “We didn’t intend to, but we broke the ice when we built out here… the industrial park property had previously been dismissed by other companies,” says Henry. Now, seeing Ceres Solutions established, other companies are making investments in the park, too, which is very good for the local economy. “White Cloud has been so welcoming to us, and we are happy to have been the first to see potential here. This community and our customers indicated that they would stand beside us if we took this leap of faith. We did, and on behalf of our team here, we are grateful. We’ll be a part of this community for a long time,” says Henry.