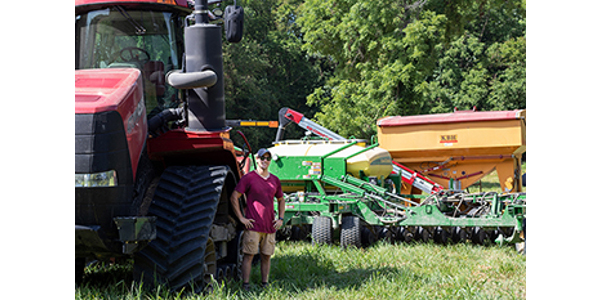 Burger is the fourth generation of farmers in his family. The family team at Triple B Farms, formerly known as Burger Sons Farms, raises corn, soybeans, wheat and rice in southeast Missouri. (Courtesy of Missouri Department of Agriculture)

JEFFERSON CITY — After Mark Burger graduated from the University of Missouri, he knew exactly what he wanted to do: farm. Burger Sons Farms was officially formed in New Hamburg, Missouri, a couple years before Burger was born in the 1990s. The joint farming venture between Burger’s father and uncle kicked off a partnership that still sustains the three generations working on the farm today.

“In the first 8 weeks of college, I started paying attention to what I really wanted to do and farming in general,” said Burger. “I talked to my dad and there was an opportunity for me to come back. I changed my major to Agricultural System Management and added a Plant Science minor.”

Today, Burger is the fourth generation of farmers in his family. The family team at Triple B Farms, formerly known as Burger Sons Farms, raises corn, soybeans, wheat and rice in southeast Missouri.

“My dad is our go-to when any of us have questions,” said Burger. “When we don’t know what to do, he’s probably been through it and has probably seen it worse. He’s the rock that holds everything together.”

Family is the most important asset to the farm, Burger said. He said between the 40 years of experience in his dad, 20 years each in his brother and cousin, and a younger generation farming together, they are able to move exciting ideas forward.

“Technology progresses so quickly and it’s very advanced today,” Burger said. “It’s hard to keep up with new seed technology and precision agriculture technology – any of the new science. It takes a lot of time and effort. That’s what I bring back to the farm. I’m able to keep up with the software, write prescription maps, navigate variable rate maps and keep harvest data.”

Burger is already looking to the future of his family farm and takes a lot of pride in farming in southeast Missouri.

“At 28 years old, the phrase Farm for Life makes me think of the next 40 years I’ll have farming,” said Burger. “Southeast Missouri may not drive any of the national markets, but we have some of the most fertile land in the United States. We have access to water and have great soil. It’s like a best kept secret. We have to remember that we’re going to be doing this for 40-50 years so it’s our job to take care of our land. It has to be around in good shape to pass on to the next generation.”

In his view, social media can cast agriculture in an unfair light and he wishes consumers had access to the same science he does each day on the farm.

“I wish consumers understood GMOs,” said Burger. “Everything you see on Facebook is ‘don’t eat this’ or ‘don’t eat that.’ Most of it is just misinformation. We wouldn’t be able to farm the way we need to without that seed technology. I’d like to remind everyone their food is safe.”

“I came back because I take a lot of pride in putting our name on our commodities,” said Burger. “I enjoy what I do, and I enjoy who I do it with. If you have to go to work every day, you might as well do it with you family.”