Home / California / The best feeding strategies for dairy calves raised in warm environments
A new user experience is coming! We'll be asking you to login to your Morning Ag Clips account March 1st to access these new features.
We can't wait to share them with you! Read more here. 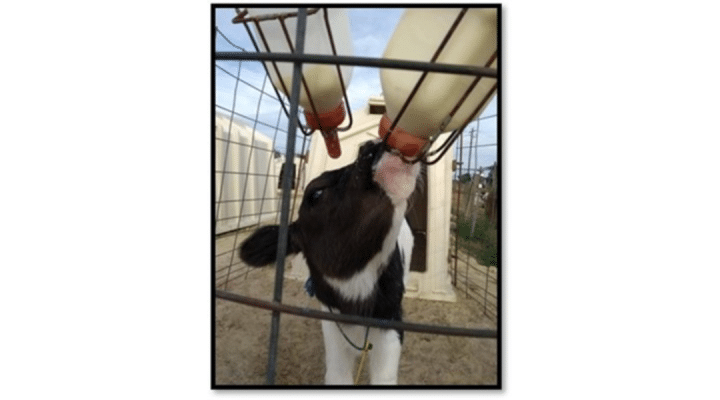 Researchers at the University of Georgia (Athens, GA, USA) tested the amount and frequency of milk replacer feeding to improve growth and digestion of young dairy calves in warm environments. (Photo: Sha Tao)

PHILADELPHIA — Calves raised during the heat of summer have reduced growth, increased disease incidence, and higher mortality rates compared with those raised in temperate environments or neutral thermal conditions. The reduced average daily weight gain observed in the summer can be partially attributed to heat stress. In a new report published ahead of the February 2022 issue of the Journal of Dairy Science®, scientists from the University of Georgia (Athens, GA, USA) investigated the effects of rate and frequency of milk replacer feeding on performance, emptying of the abomasum (one of the bovine forestomachs), and nutrient digestibility among young calves during summer and winter in the warm environment of the southeastern United States.

When calves are exposed to heat stress, their food intake is reduced, resulting in lower total energy and nutrient consumption. Additionally, animals in adverse environments experience dramatic physiological and behavioral changes to cope with distress. For example, calves in an environment with elevated ambient temperature (≥20°C, or 68°F) sweat and pant to dissipate heat and maintain their core body temperature.

By dividing the calves in the study into groups of high or low amounts of milk replacer and high or low frequency of feeding (three times a day vs. twice a day), the team tested their hypothesis. From a previous study by the group (Orellana Rivas et al., 2020), the researchers already knew that too much milk replacer would have detrimental and dangerous health effects on the calves when fed twice a day during summer. This helped them set an upper limit on the amount to be fed.

Starter grain and milk replacer intakes were recorded daily, respiration rate and rectal temperature were recorded three times a week, and structural growth and body weight were measured weekly. Rate of abomasal emptying, a critical factor that regulates energy and nutrient utilization in preweaning calves, was determined using an acetaminophen absorption blood test. Finally, apparent digestibility of nutrients was measured using chromic oxide as a marker in the feed.

Tao concluded, “These data indicate that increasing feeding frequency lowers heat load. This may be due to reduced metabolic heat production, increased heat dissipation, or both.” The team’s findings represent a step toward optimization of feeding strategies for young cows in hot environments, a major sector of dairy production, to help maximize calf growth, health, and welfare, and thus also to improve profit margins in dairy production.

–Journal of Dairy Science
via EurekAlert!