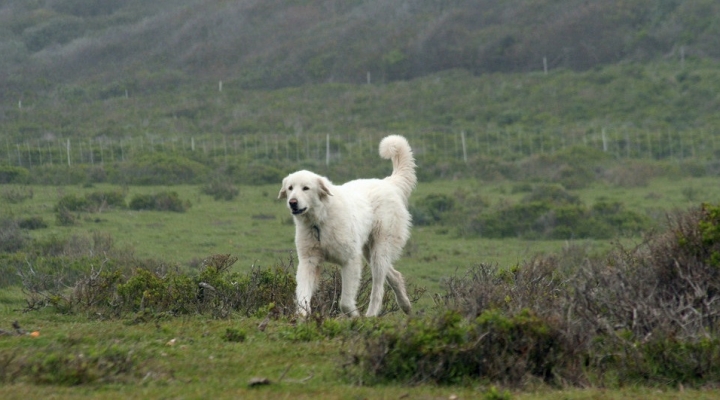 Just as you wouldn't try to use an Irish setter to herd sheep or a border collie to hunt birds, only livestock guardian dog breeds are big enough, powerful enough, determined enough and calm enough to be effective at deterring predators. (Teddy Llovet, Flickr/Creative Commons)

MOUNT VERNON, Wash. — Livestock guardian dogs (sometimes called LGDs) can be lifesavers, not only for herd animals and poultry but also for farmers and ranchers trying to build a profitable business.

Laura Faley owns Hidden Meadow Ranch near Mount Vernon, Washington, about 60 miles north of Seattle. She raises chickens, turkeys, ducks and sheep with the help of dogs bred specifically to cope with the coyotes, bears, raptors and other predators roaming her property.

The guardian dogs also help control other dogs — family pets allowed to run loose through neighborhoods, posing a threat to goats and sheep.

Before Faley acquired her guardian dogs, she was losing more than 40 lambs per year to eagles, and large numbers of ducks and chickens to great horned owls.

“Now it’s zero,” Faley said. “I’ve had my dogs for five and a half years. In that time, I haven’t lost any livestock.”

Dogs have been genetically refined over the years to protect livestock from predators. There are some 20 to 30 breeds of livestock guardian dogs around the world.

The breeds display a wide range of temperaments. “Some are better suited as remote pasture guardians where a daily routine is very constant, while some are good in situations where there is a high degree of variety,” the Livestock Guardian Dogs Association says.

Just as you wouldn’t try to use an Irish setter to herd sheep or a border collie to hunt birds, only livestock guardian dog breeds are big enough, powerful enough, determined enough and calm enough to be effective at deterring predators, Faley said.

The best-known breeds in the United States are great Pyrenees, Anatolian shepherds, Akbash and Maremma sheepdogs. “They are generally aloof toward strangers, and their size alone is rather intimidating,” the Association says.

Picks of the litter can be pricy, said Faley, who has two Anatolian shepherds and two Kangals. “I paid $1,200 each for the (two) purebred registered Kangal puppies,” she said.

Match the animals to your specific needs.

“Buy your dog only where you can see both parents working,” Faley said. “Genes are everything. Bad training can be fixed. Bad genes cannot.”

The most effective livestock guardian dogs are those that bond with livestock and poultry rather than with people.

“There’s a strong distinction between pets and guardian dogs,” said John Tomecek, a Texas A&M Agrilife Extension wildlife specialist. “It’s good to be able to approach them in the pasture and handle them, but it’s not good to have them hanging around the house.”

The larger the area and the more livestock you have, the more guardian dogs you’ll need.

“A lot also depends upon the terrain,” Tomecek said. “If it’s open and you can scan it pretty well, then you won’t need as many (dogs).”

A commonly cited rule is one dog per every 400 to 500 acres, but that’s not universal. “Visit with others to see what works in their areas,” Tomecek said.

Dogs aren’t the only guardian animals effective for predator control. Llamas and donkeys also are popular for protecting vulnerable goats and sheep.

“It’s a matter of personal experience and preference,” Tomecek said. “Most of the problems here are with coyotes. I prefer using a canine to deter another canine.”

Mexican chile production is up