Home » The beauty in a burl 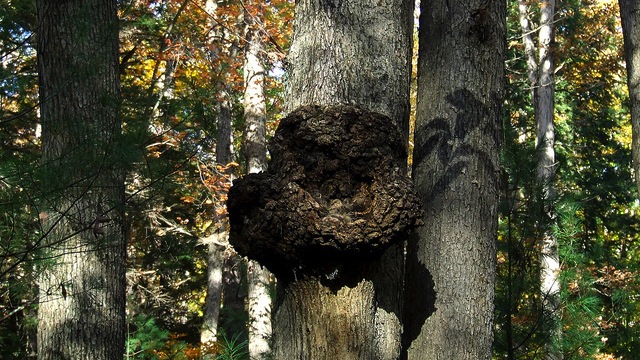 Cut open a burl and instead of straight grain you find waves and swirls of wood, marbled and feathered wood, perhaps some "eyes" staring back at you. (Dave Bonta, Flickr/Creative Commons)

WASHINGTON — As you glance up into tree limbs, perhaps searching for some sign of spring in a swelling flower bud, your sight might be arrested by fat, rounded growths on the bark.

On some trees, these hard, woody outgrowths — called burls — stand out on an otherwise clear trunk like a goiter. On other trees, the whole trunk might be covered with these masses.

If you’ve never noticed these growths before, don’t be alarmed. They cause little or no harm to the tree.

WHAT MAKES A BURL

That said, burls might — just might — indicate that the tree has been under stress. All sorts of things have been implicated as the cause of burls. For instance, a burl could grow in response to a limb rubbing against the bark, to chewing by insects or some other physical injury. Perhaps the tree experienced or is experiencing some environmental stress — temperatures too cold or too hot, not enough food or not enough sunlight, for example.

Diseases have also been held responsible for burls. However, no pathogens are found inside burls when they are cut open. Still, a pathogen could have done its job of inducing a burl, and then skipped on to other adventures.

We could also blame genetics, because some tree species are more prone to developing burls than others. Redwoods are renowned for their burls, which are often sold as souvenirs.

We do know, though, how burls develop. Along any stem are buds that can elongate to become shoots, and each of these shoots similarly has buds that can become shoots themselves. Obviously, not all buds on a plant stretch out; some remain dormant, at least for a while.

In the case of a burl, instead of dormant buds expanding into straight shoots, they grow inward, twisting and turning under the bark and never emerging as branches.

On the rare occasion when a shoot does elongate from a burl on a mature tree, the shoot usually expires from lack of sufficient light. Interestingly, redwood burls frequently sprout when cut from the tree and placed in a pan of water, almost as if the water reminds the cells that they can be shoots. On a tree, though, cells within a burl generally just keep dividing with no obvious purpose or benefit to the tree.

Benefit to us humans is another story, though. Cut open a burl and instead of straight grain you find waves and swirls of wood, marbled and feathered wood, perhaps some “eyes” staring back at you. Woodworkers lust for burls, especially for turning on a lathe, where the appearance of the swirling tissue need not be constrained within the straight and sharp-edged geometry of sawn lumber. Burls are also frequently sliced into veneer.

The beauty within a burl and the theories for what causes them could prompt you to try to induce them on a tree. Yet no one has been able to reliably do so. So burls are harvested from trees on which they have naturally formed. Because harvesting a burl can leave a large scar, cut burls only from trees that are being or have been cut down for other purposes.