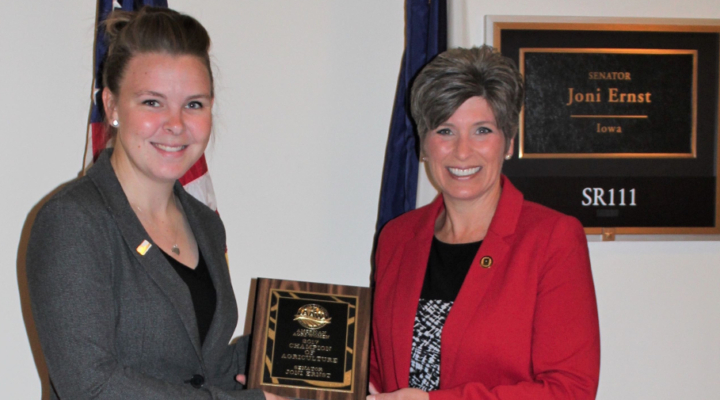 In early February, Senator Ernst met with Sonny Perdue, who was at the time the nominee for Secretary of Agriculture, and discussed with him the agriculture economy and the challenges farmers and ranchers across the nation are facing. She also spoke of the importance of renewable fuels and strong trade agreements with other countries; both of which are very important to Iowa’s economy.

Senator Ernst introduced legislation in the Senate (which passed the Senate and House) to dismiss the expanded definition of WOTUS. She recognized the flaws in the expanded WOTUS Rule, and the need for a more effective approach to protecting our water without placing unnecessary regulatory burdens on our farmers, businesses, and manufacturers.

Senator Ernst’s passion for agriculture is rooted deep in her Iowa heritage and life experiences. Being raised on a family farm in Iowa, she grew up walking soybeans and cornfields, and feeding hogs.

“As Senator, Joni Ernst has worked on behalf of agriculture by supporting and initiating pro-ag legislation. Her commitment to families in farming, ranching, and agribusiness has proven her to be a true advocate for rural America, and she continues to show a willingness to face the challenges that lie ahead for the industry,” said Krystal Doolittle, Iowa Agri-Women member.

AAW President Doris Mold explained, “We are honored to recognize a true Champion of Agriculture in Senator Joni Ernst. Her concern and dedication to agriculture and rural America is evident in both her words and actions.”

“Championing Iowa’s farmers is a priority of mine. I will continue to work to cut burdensome regulations, and lead efforts that promote our agriculture economy and rural communities. I am grateful for this honor as we work to assist the men and women who help feed and fuel our nation and world,” said Senator Ernst.

American Egg Board: Eggs are a “healthy food” in proposed FDA definition
October 2, 2022