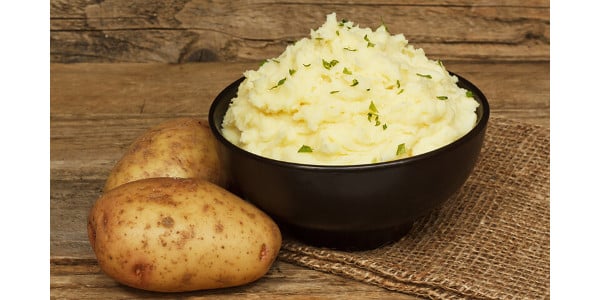 Mashed potatoes are usually thought of as a Thanksgiving mainstay. (Courtesy of sousvideguy.com via Flickr)

CASTLE ROCK, Colo. — Thanksgiving menus are as variable as the population, and each house will be different. Some traditions are probably common across many meals, though—and can make for great avenues of perhaps unexplored and distracting conversation. To your health and happy discourse!

Mashed potatoes are usually thought of as a Thanksgiving mainstay. Potatoes were introduced to Europe from South America in the late 1500s—despite their “late” arrival a few lively superstitions surrounded them rather quickly. According to Richard Folkard, author of Plant Lore, Legends, and Lyrics (Published 1884), “a Potato carried in the trousers pocket is a sure charm against rheumatism so long as the tuber is kept there.”1 If the potato had been stolen, so much the better. Potatoes were also suspected of causing leprosy and various skin ailments, though later, were deemed (when mashed) an excellent remedy for both burns and frostbite.2

Perhaps the boldest potato claim is this: “A luminosity, powerful enough to enable a bystander to read by, issues from the common Potato when in a state of putrefaction; this was particularly remarked by an officer on guard at Strasburg, who thought the barracks were on fire in consequence of the light that was emitted from a cellar full of Potatoes.”1 While this seems unlikely and very unpleasant to test, you could instead enhance your holiday season’s scientific flair by using a potato, a penny or bit of copper wire, and a galvanized nail to power an LED.3 The copper and zinc from the nail and penny are essential, the potato serves as an acid source—so a lemon (and many other fruits or veggies) would work too.

Potato can also be a verb, meaning “to provide with potatoes, or to plant with potatoes.”4 An 1862 Harper’s Magazine said, “The bread is buttered, coffee creamed, and meat potatoed, with jokes and laughter.” This creation of a verb from a noun seems pretty obvious. At least until you get to “carrot.” Carrot probably comes from the Greek, κάρᾱ head, top, related to κεϕαλωτόν, headed (referring to plants with bulbs, like garlic).5 And if you make carrot into a verb, you get “to treat [fur] with nitrate of mercury.”6 I’ll take something that’s been potatoed over carroted any day, at least on my dinner plate!

Neither the vegetal nor the vestimentary carrot should be confused with this symbol ^. It’s a “Caret,” which comes from the Latin verb Carere, meaning “to be in want of”. Caret literally means “it’s missing [this].” That it looks like an upside down carrot is a complete coincidence. Carrot and Caret. For more information than you can stomach on the former, you absolutely must pay a visit to the World Carrot Museum, which conveniently enough exists virtually, at www.carrotmuseum.com. Perhaps your Thanksgiving could include music played upon the carrot, which is a thing. Then your dinner party caret absolutely nothing.

The Cranberry was formerly more glorious than a purplish table decoration. The Druids collected them for various ceremonial purposes, and the ceremonies extended to the harvesting. “These consisted in a previous fast, in not looking back during the time of their plucking it, and lastly in using their left hand only.”1 “Cranberry” appeared in English relatively recently, from the German. Herbalists and cooks of earlier times would have known them as marsh-worts , fen-worts , fen-berries , marsh-berries, and moss-berries.7 Some of these are obviously more appetizing than others. Pass the Fenwort sauce!

If you’re still reading, I’ll close with beans. Perhaps you enjoy green bean casserole. If so, you should know that if an expectant mother in the 17th century were to “chance to partake too bountifully of Onions, Beans, or similar vaporous vegetable food, she was warned that her offspring would be a fool, and possibly even a lunatic.”1 Meanwhile, coriander would make the child a genius. Fad diets aren’t a modern invention!