Home » Thanksgiving turkey shortage? Not when you “ChopLocal”!
holidays poultry 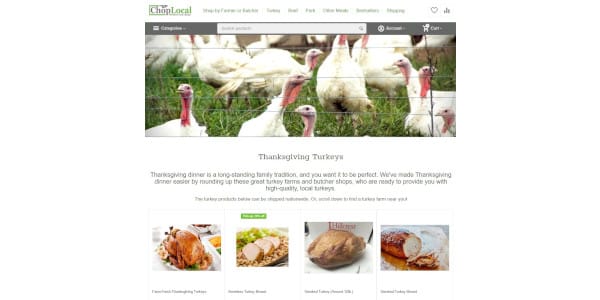 WAYLAND, Iowa — The Thanksgiving turkey is one of the cornerstones of the holiday, but some experts are reporting a shortage of turkeys – especially smaller ones.

“Your best bet for getting a small fresh turkey is to order one from a local turkey farm today,” Consumer Reports advised in late September.

ChopLocal has made that easy by rounding up a list of local turkey farms, mostly located in the midwest and northeast regions of the United States. Many of the farms offer online ordering, and some will even deliver your turkey to your door.

“There’s nothing wrong with a turkey from the grocery store,” says ChopLocal’s CEO, Jared Achen. “But there’s something special about buying a turkey directly from the farmer who raised it.”

ChopLocal is an online marketplace where customers can purchase meat from local farmers and butcher shops. The company was founded in 2020, partially in response to the challenges faced by farmers and consumers related to supply chain issues during the pandemic.

Over a year later, supply chain challenges and labor shortages are still plaguing the meat industry, adding to the fears of a turkey shortage.

Customers looking for a local turkey can browse the directory and find information about the farms and how the turkeys were raised.

In addition to the turkey farm directory, ChopLocal is home to butcher shops as well as pork, beef, chicken, rabbit, lamb and shrimp farms. The marketplace also offers a variety of holiday gift boxes featuring meat from local farms.

One of the farms included in the local turkey directory belongs to the Moline family of Manson, Iowa. The Molines came to Iowa in the 1800s and began farming at their current location nearly 100 years ago in 1924. Brad Moline, the father of Ava, Coy and Logan Moline, is part of the fourth generation on the farm.

“I started raising my own turkeys when I was in grade school,” Brad says. “I went to Iowa State University and got a degree in animal science and dairy science. Then I returned home to the farm full time in 2002 and I’ve been in charge of the turkeys ever since, along with my father John and my brother Grant.”

Ava, Coy and Logan are continuing the family tradition as 5th generation Iowa turkey farmers. In addition to their family’s commercial turkey farm, which also raises turkeys for West Liberty Foods, the Moline children have been raising free-range Thanksgiving turkeys for several years.

The Thanksgiving turkeys are a small breed known for its flavor. Hybrid Mini-Classic turkeys have white feathers and a smaller stature than the family’s commercial turkeys which are Broad-Breasted White.

The baby turkeys (poults) arrived at the farm in July and have been taken care of by the kids since that time. The poults start their lives on the farm in a barn, where they are protected from predators and can easily access feed and water. Heaters in the barn keep their body temperature where it needs to be.

As they grow, the turkeys are introduced to an outdoor area where they can peck grass and eat bugs. Trees provide shade and fans inside the barns keep the birds cool during the warmer summer weather.

The flock includes male and female turkeys, which are expected to be between 10 and 20 pounds each after harvest. This year, the turkeys will be harvested November 11, and fresh Golden Prairie Turkeys can be found at many locations across Iowa. Frozen turkeys can also be shipped directly to customers.

A good rule of thumb is that you’ll need 1 to 1.5 pounds of turkey for every person at the Thanksgiving gathering. If you’re feeding a large crowd, it may be better to cook two small turkeys instead of one larger one.

Your turkey is done cooking when it reaches 165 degrees fahrenheit throughout. Use a meat thermometer to check the temperature in the thickest part of the thigh to ensure that it has reached the proper temperature.

Finally, make sure you let your turkey rest. After removing from the oven, wait at least 20 minutes (30-40 for a larger bird) before carving. This allows the juices to redistribute throughout the meat, leading to a tastier turkey.