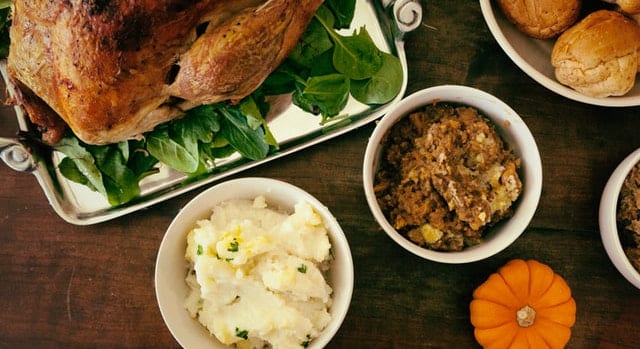 Turkey prices are about $1.41 per pound in New York State, which is about an 11% increase over last year’s average price in this informal survey. Prices found by volunteer shoppers ranged from $.68/lb. to $1.69/lb. This price is above the national average of $1.21/lb. (Photo by Pro Church Media on Unsplash)

ALBANY — New York Farm Bureau’s 2020 Market Basket Survey shows the price of a traditional Thanksgiving dinner saw a modest uptick from last year’s meal. The average total price, which includes a 16-pound turkey and other common items found on a holiday dinner table, is $49.23 or a $2.86 increase over last year.

Turkey prices are about $1.41 per pound in New York State, which is about an 11% increase over last year’s average price in this informal survey. Prices found by volunteer shoppers ranged from $.68/lb. to $1.69/lb. This price is above the national average of $1.21/lb. As we move closer to Thanksgiving, turkey prices may continue to drop in the stores, reflecting sales in the final days before the holiday.

The New York numbers revealed price increases in several categories including for a gallon of whole milk, Libby’s Pumpkin Pie Mix, fresh cranberries and a 14-ounce package of cubed stuffing. Some ingredients saw decreases. These include whipping cream and a carrot/celery veggie tray.

This year’s survey also includes a more notable increase for an expanded menu that includes a four-pound ham, five-pound bag of russet potatoes and a package of frozen green beans. When those prices are included, the total meal price jumps to $64.31, more than four dollars over last year’s number.

The survey highlights that the classic meal remains affordable with a price point of under five dollars per person for a 10-person meal. The affordability demonstrates that although farmers and ranchers dealt with significant issues this year related to market and distribution disruptions due to the pandemic, consumers are still benefiting from relatively low retail prices, in part because the actual cost of the food – the portion paid to farmers – is only eight cents of each dollar consumers spend on food at the store.

“It has been a challenging year for every New Yorker, but farmers haven’t stopped doing what we do best, growing quality, nutritious food. Market disruptions have affected some prices, but overall, our volunteer shoppers found the traditional dinner remains affordable for many shoppers,” said Darleen Krisher-Meehan, chair of New York Farm Bureau’s Promotion and Education Committee. “While the holiday season may look a little different this year, we should all give thanks that our food supply remains strong and stable thanks to our farmers and employees who have proven to be essential workers in 2020.”

This survey is one of the responsibilities of the NYFB State Promotion and Education Committee and is part of the national effort with the American Farm Bureau Federation. AFBF’s 35th annual informal national price survey found the average national cost of this year’s feast is $46.90, about two dollars less than New York’s number. More information on the national survey can be found at www.fb.org.

New York Farm Bureau’s volunteer shoppers sampled prices at 14 different supermarkets throughout the state trying to get the best prices available, but they did not use promotional coupons or special deals such as “buy one-get one free.”  They were also encouraged to use online shopping to gather prices because of the pandemic. The shopping list includes 15 common Thanksgiving food items ranging from turkey and rolls to stuffing and celery to pumpkin pie mix, enough to feed 10 people around the dinner table. An average for miscellaneous ingredients, like flour and butter, is also included. The 2020 Thanksgiving survey displayed considerable price variation across the state.

The best advice for shoppers is to compare prices to save money.  The numbers below reflect the overall average of the volunteer shoppers and is not meant to be a true scientific survey, but rather a snapshot of what shoppers may find leading up to the holiday.

Farm Bureau does not make any statistical claims about the survey data, but it is a useful gauge of price trends across New York and the country for shoppers who look to compare prices.