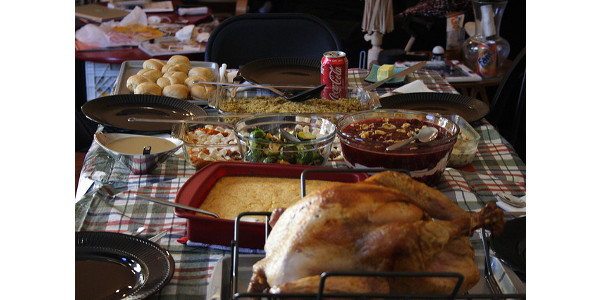 Since 1941, Thanksgiving has been a U.S. federal holiday held on the fourth Thursday in November. (Klimt via Flickr)

EAST LANSING, Mich. — Since 1941, Thanksgiving has been a U.S. federal holiday held on the fourth Thursday in November.  President George Washington in 1789 declared a proclamation of “public thanks” to be held on November 26, eventually followed by a proclamation in 1863 by President Lincoln to “set apart and observe the last Thursday of November as a day of Thanksgiving and Praise.”  President Franklin Roosevelt decided to move Thanksgiving to the third Thursday in November to boost the economy with more time for Christmas shopping, but this was not very popular, and it was moved back to the fourth Thursday.

Past practice was to simply assess the cost of a typical Thanksgiving dinner for ten people, buying items from the grocery store.  Last year this cost was $48.91, a one cent increase from 2018.  The average person eats 12-15 pounds of turkey per year.  A Nielsen survey projects this year’s cost at $55.27.

The Tuesday, November 17, 2020 Wall Street Journal had an article about this year’s Thanksgiving will be like none other.  This year, gatherings likely will be smaller, with more people cooking a turkey for the first time, or people buying pre-cooked dinners from a number of local vendors.  Americans expect to eat 40 to 46 million turkeys on Thanksgiving.  Butterball LLC provides over one-fifth of all the turkeys.  Their turkey hotline will take about 200,000 calls, with the most common question being, “How long do I defrost my turkey?”

The name Butterball™ was originally trademarked in 1940 by Ada Walker of Wyoming, Ohio who sold the trademark in 1951 to Leo Peters for $10, who licensed it to Swift and Company, a meat processing company in Chicago.  Leo Peters eventually founded Butterball Farms, Inc a butter company in Grand Rapids, Michigan that had nothing to do with turkeys.  And, there is no butter in these branded turkeys.

Turkeys are obviously gluten free, since gluten is a protein only found in wheat, barley and rye.  Turkeys are not given growth hormones and turkeys cannot be sold off the farm with any antibiotics.  A male turkey is called a tom, a female is a hen, a baby turkey is called a chick or a poult.  It takes about 6 months to raise a turkey.

Corn is another part of many traditional Thanksgiving dinners.  Corn, or maize, is native to North America, found in central America over 7,000 years ago with popcorn seeds found in bat caves in Mexico that were over 5,600 years old.  There are commonly six kinds of corn grown in the U.S., sweet corn, popcorn, ornamental (Indian) corn, #1 food grade corn (think corn chips), #2 yellow dent corn and seed corn.  Most of the corn seen growing in Monroe County is yellow dent corn used for livestock feed.  The price of corn in China yesterday was over $9 per bushel.

Interestingly, in 1867, the University of Michigan selected maize (yellow in generally the color of corn) as one of its two school colors, with azure blue being the other.