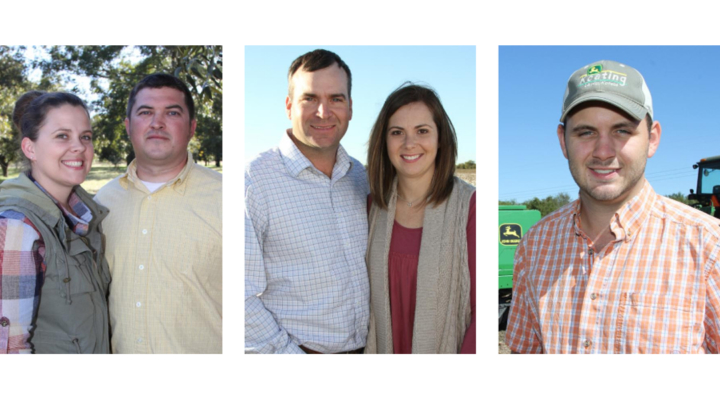 Each year, TFB recognizes the accomplishments of some of the state’s top agricultural leaders between the ages of 18 and 35 through the YF&R contest and rewards them for their hard work and determination to succeed.

The 2017 Outstanding YF&R finalists are: Ryan and Santanna Bay of Gatesville; Layne and Jamie Chapman of Vernon; and Braden McInnis of Tennessee Colony.

“We are proud of these farmers and ranchers. They represent a bright future for Texas agriculture and the next generation of Texas Farm Bureau,” TFB President Russell Boening said. “They each look for ways to diversify and be innovative as they care for the land, their families and their communities. We’re honored to recognize them for their dedication to Texas agriculture.”

Finalists are chosen from each of TFB’s 13 districts. The Bays, Chapmans and McInnis were chosen as finalists from that group.

A panel of volunteer judges visited each of their farms. The state winner will be named at TFB’s Annual Meeting Dec. 2-4 in Frisco.

Ryan and Santanna Bay grow, harvest, process and shell pecans for direct-to-consumer and wholesale markets. The first generation pecan growers also custom harvest and manage orchards for landowners, as well as provide custom pecan cracking and shelling for the public. They co-own Coryell County Feed & Supply in Gatesville. The couple has two sons, Greyson and Graham.

Layne and Jamie Chapman grow irrigated and dryland cotton, corn and wheat on the Northern Rolling Plains. Layne is a fifth generation farmer and uses no-till and strip-till farming techniques and has implemented drip irrigation. Jamie also owns Pepperberries, a gift shop in downtown Vernon. The couple has one son, Jaxon.

Braden McInnis grows corn, sorghum, soybeans and wheat and raises cattle in Anderson County. He started farming in high school and has continued to expand his operation since then. The first generation farmer sells his corn directly to Sanderson Farms and other feed mills and feed stores in the area.

The winner of this year’s Outstanding YF&R contest will take home the title to a 4×4 Ford pickup truck with a diesel engine, courtesy of Texas Farm Bureau Insurance Companies, and a $5,000 cash award, courtesy of Farm Credit Bank of Texas.

The two runners-up will receive a $500 cash award, courtesy of Southern Farm Bureau Life Insurance Company, and a power tool, courtesy of Grainger.

All three finalists will receive an expense-paid trip to the TFB Annual Meeting Dec. 2-4 in Frisco.

The state winner will also represent Texas in the Achievement Award competition at the American Farm Bureau Federation annual meeting in January in Nashville, Tenn.