Home / Texas / Texas Wheat Producers Board members
A new user experience is coming! We'll be asking you to login to your Morning Ag Clips account March 1st to access these new features.
We can't wait to share them with you! Read more here. 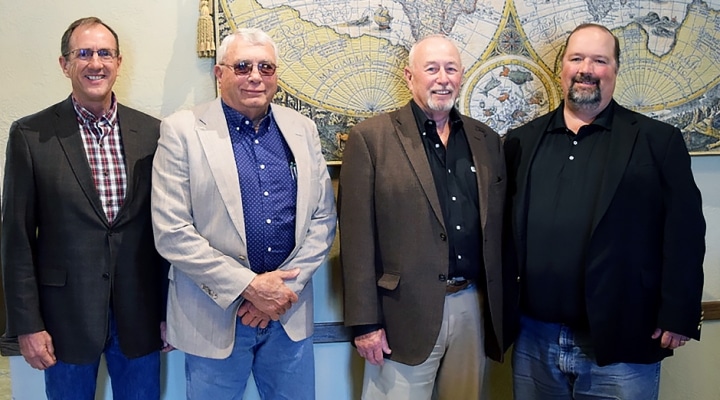 Texas Wheat Producers Board members who were elected/reelected after being sworn in on May 6. Pictured from left: Scott Born, Freddie Streit, Ben Scholz and Jason Schickedanz. (Not pictured: Corby Shadid) (Courtesy Photo)

AMARILLO, Texas — The Texas Wheat Producers Board held its biennial election to fill five expiring seats from March 23 until April 6. Based on the results of the election, four nominees were reelected and one nominee was newly elected to serve six-year terms on the board.

Members reelected to the board include Corby Shadid of District II, Freddie Streit of District III, and Scott Born and Ben Scholz of District IV. Jason Schickedanz of Perryton was elected to fill a vacant seat representing District I, which was previously held by Scott McGarraugh, who retired after 36 years on the board.

The elected board members took an oath of service delivered by an official from the Texas Department of Agriculture as required by state law during the May board meeting.

During the meeting, the board also elected new officers to fill expiring positions. The board approved the following slate of officers to serve two-year terms: Ken Davis as Chairman, Chet Creel as Vice Chairman and Scott Born as Secretary/Treasurer.

Board members are elected by their peers from four districts across the state and are responsible for managing funds from a statewide wheat producer check-off of two cents per bushel. These funds are applied to wheat research, education and market development to provide additional value to wheat farmers across the state.

Other members of the board include Jody Bellah of Throckmorton, Collin Bowers of Spearman, David Cleavinger of Wildorado, Bryan Clift of Stratford, Glen Gibson of Lometa, Gary Murphy of Dawson, Tyler Norman of Sherman and Tommy Womack of Tulia.

The Texas Wheat Producers Board is a statewide board funded by a voluntary two cent per bushel checkoff program. Checkoff funds are used for research, market development and education to further the wheat industry in Texas and support the profitability of wheat producers. For more information, visit http://www.texaswheat.org.