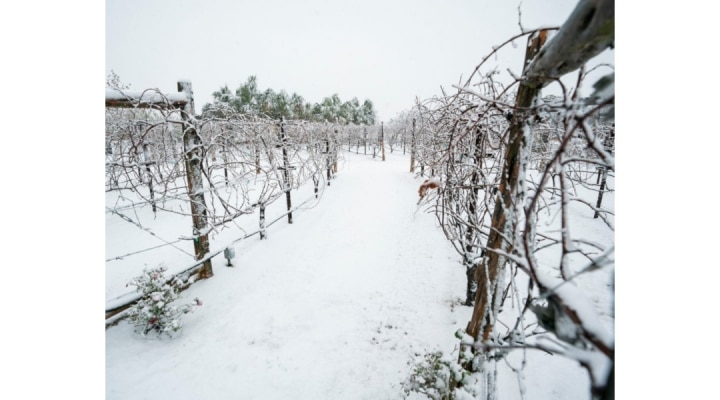 Vineyards around the state faced a wild range of Texas weather from freezing temperatures and ice to bouts of drought and torrential rains during the 2021 growing season. (Texas A&M AgriLife photo by Sam Craft)

Weather events were the primary problem for individual growers across the state, and below-average yields, especially in certain grape varieties, are expected. Every region from East Texas to the High Plains, the Gulf Coast and Hill Country reported crop losses attributed to weather, including Winter Storm Uri, a late-spring frost and torrential spring rains that caused a multitude of potential problems for wine grape producers.

In February, Winter Storm Uri blanketed the entire state with ice and freezing temperatures and negatively impacted yields at many wine grape-producing vineyards this season. The extremely low temperatures killed some vines back to the ground and will require years of recovery before they produce fruit again, Cook said.

“Usually, we have one region that might be exposed to conditions that affect production, but everyone was impacted this year,” he said. “Significant damage was hit or miss, but weather certainly contributed to vine losses in certain regions and yield losses around the state.”

Cook said most of the severe vine damage related to the week-long freeze was located in East Texas and affected Blanc du Bois grapes, which are typically grown around the Gulf Coast and are not as cold-hardy as other varieties.

Many growers lost 12-to-15-year-old vines to the ground that will take 2-3 years of retraining before producing grapes again.

As much as 95% of the Blanc du Bois crop in East Texas was lost due to the winter storm. These losses have caused concern among wineries because Blanc du Bois grapes are in high demand for the production of sweet, dry and sparkling wines, he said.

East Texas vineyards also experienced significant crop loss of Black Spanish grapes, a variety used in red wines, and Tempranillo grapevines in North Texas vineyards from Stephenville to the Red River were impacted by a late spring frost in mid-April when vines were near bloom.

Cook said vineyards reported up to 50% losses in their Tempranillo crop, but that vines did not sustain damage that could impact next season.

Brianna Crowley, AgriLife Extension viticulturist, Fredericksburg, said the winter storm contributed to 80%-90% bud mortality for some producers, which translated into losses of primary vine shoots that produce fruit, so yields are expected to be below average overall in Central Texas.

“It was a very wet year, and diseases like black rot exploded, even in vineyards that maintained a tight spray plan,” she said. “It was everywhere.”

The expected short supply of wine grapes has winemakers scrambling for fruit, Crowley said. They are trying to find grapes but are also asking about alternative options like pears.

But recent drier conditions have Crowley expecting quality fruit, barring any unforeseen calamity before they are harvested. The first round of lab sampling showed grapes were two to three weeks behind schedule on ripening but were maturing well.

“It will definitely impact the supply and demand aspect of wine grapes,” she said. “Growers with moderate to decent crops should expect a premium for their fruit. I would expect a lot of negotiation on grapes, especially popular varieties that are in short supply, and it could mean bottle prices go up for this year.”

Fran Pontasch, AgriLife Extension viticulturist, Bryan-College Station, said wine grapes along the Gulf Coast experienced a similar growing season filled with uncertainty for growers and winemakers. Yields will also be down in the region, but there is still hope that quality grapes will lead to quality wines.

The winter storm caused uneven ripening in the region in varieties like Blanc du Bois, but weeks of rain have been detrimental to vines. Disease pressure was high and waterlogged grapes were splitting.

But overall, Pontasch said much of the harvest potential in the region remained uncertain, but that there was high hope for 2021 wines. The cooler temperatures are allowing grapes to mature slower and more gently, which will affect the wines they produce.

“For all the work growers have put in to get these grapes to maturity, I hope they do get good prices,” she said. “The vintage is a snapshot of that year and what it takes to get grapes from vine to bottle, and so 2021 will definitely be interesting and set it apart.”

Food help on the way for Louisiana households hit by Ida
September 5, 2021