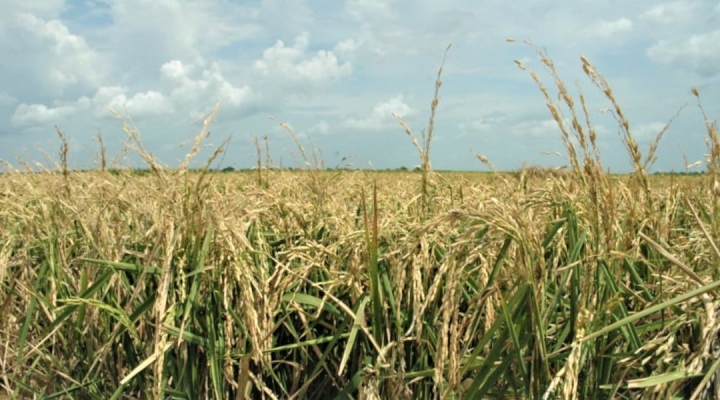 COLLEGE STATION, Texas — Rice yield reports were surprisingly good despite hot, dry conditions, and prices were up, but so were input costs, according to a Texas A&M AgriLife Research expert.

Lee Tarpley, Ph.D., AgriLife Research plant physiologist, Beaumont, said harvest is close to the mid-point for the main Texas rice crop. Sunny days have allowed harvest equipment to push the pace in most fields though some areas have received rainfall, which could mean delays.

“Yields have actually been pretty good – average to above average, so far,” he said. “Producers have been taking advantage of the good harvesting weather and were moving along pretty quickly.”

Tarpley attributed the better-than-expected results to lower pest and disease pressure, which is likely due to low moisture and humidity levels from drought. Some producers were reporting poor grain quality in rice, likely due to heat stress, but instances of lower grain quality were “here and there.”

A timely harvest could be important for rice producers to maximize the ratoon crop potential, Tarpley said.

Ratoon rice crops are a second crop of rice that is produced from plant regrowth following a cutting. Many producers break even with the main rice crop and find profits with the ratoon crop, Tarpley said.

But delays to harvest can lead to higher cuts, which means the ratoon crop is produced from upper branches. Tarpley said the upper branches can bring grains to maturity quicker, but yields are much lower.

Delays could be of greater concern this year because most Texas rice fields were planted later than usual, he said. Fields typically planted in early March were planted in late March or early April this season due to low temperatures and/or rain.

The late start could exacerbate any delays as rice producers prepare and cut their main crop at a height best suited to produce mature ratoon crop grains before temperatures drop below about 50 degrees in the fall, Tarpley said.

Tarpley said some fields east of Houston received heavy rains over the weekend that will likely delay harvest for multiple days. Rice fields around Bay City and other rice-producing areas have high potential to receive rainfall for the next couple of weeks.

“Folks who haven’t harvested may be delayed and struggle to squeeze in a harvest,” he said. “They need to get the ratoon crop up and running to get the good yields related to that lower stubble cut and in time to beat cold weather that typically shows up in November.”

Another concern for Texas’ ratoon crop could be potential water restrictions due to continued drought, Tarpley said. Restrictions have already cut off canal irrigation in areas west of Houston, which will prevent ratoon crop production for affected producers.

“The planted acres number was better than expected,” he said. “There was some concern that some producers might not plant because of the high input costs.”

Rice prices did not follow other grains like wheat and corn to historic highs following the Russian invasion of Ukraine, he said. Tarpley said India’s government was subsidizing production to dominate the market with lower-priced rice.

Prices did start climbing in May and remain slightly better than last year. But as input costs like fertilizer and diesel increased to historic highs, price potential for growers rice remained relatively stagnant, Tarpley said.