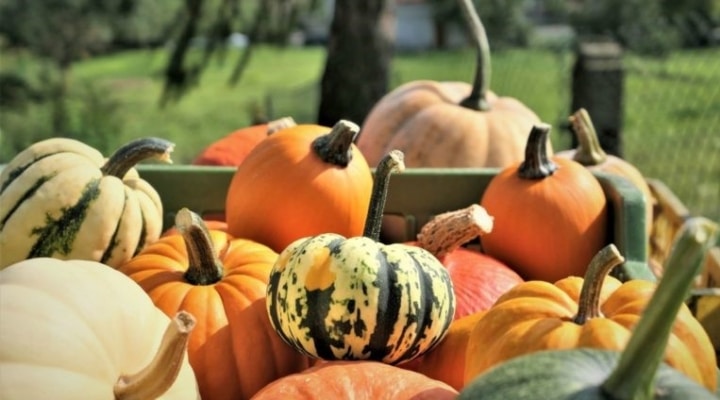 Pumpkin growers are expanding their variety offerings from the traditional orange jack-o-lantern to meet growing demand for the decorative fruit. (Courtesy Photo)

Carroll said very little rain and low humidity led to very few heavy dews during the season, which can allow funguses to establish and proliferate.

“It was so dry, and pumpkins require a lot of water, but they’re also very susceptible to funguses,” he said. “So, the dryness hurt and helped. The quality is some of the best it’s ever been because of the low disease pressure.”

There are a few pumpkin acres outside of the 600 production acres in Floyd County, Carroll said, but Floydada has established itself as the “pumpkin capital” of Texas.

Most producers were finishing harvest this week just in time for Punkin’ Days, the annual pumpkin festival, he said. Floydada pumpkins are marketed throughout the state and the U.S.

“It used to all be pumpkins for jack-o-lanterns, but some have gotten into specialty varieties, gourds and odd pumpkin types. The growers have come up with some innovative ways to market their pumpkins, and they work together in ways that are good for everybody.”

Tanner Smith, a Floydada pumpkin grower, said tonnage was lower than expected in some areas, but that quality and demand were “through the roof.”

Smith said operations there typically begin taking wholesale orders August-September and focus on direct-to-public retail sales in October. Producers are turning away nonstop calls for wholesale orders, so prices are expected to be higher than normal.

“There were a lot of acres lost to freeze in New Mexico, so that affected supplies,” he said. “Demand has been way up. Everybody in Floydada is sold out as far as the wholesale market goes. I think some are wishing they’d hung on to more pumpkins for the retail market.”