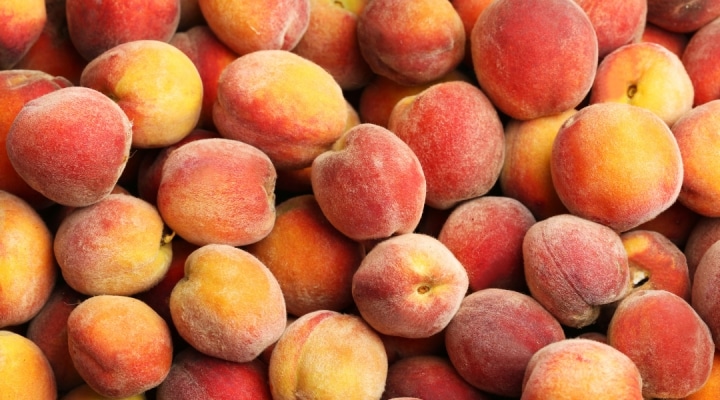 Larry Stein, Ph.D., AgriLife Extension horticulturist, Uvalde, said there was fear among growers that Winter Storm Uri might impact Texas peach production significantly, but all signs point to an above-average crop. Blackberries, another significant fruit crop for the state, were also expected to produce a bumper crop.

“I wasn’t sure there would be a crop this year, but barring any unforeseen weather calamities, Texas producers are expecting a good crop in both quality and quantity,” Stein said.

Conditions have been good overall since the freeze for Texas’ fruit crop, Stein said. Dry conditions helped trees avoid disease issues, and timely rains have provided good additional moisture as fruit begins to fill out. So far, spring storms have produced minimal hail and turbulent winds that can cause yield loss.

While some early peach varieties and trees actively emerging from winter or that had opening blooms suffered crop loss and some tree damage or kills, Stein said Texas’ commercial production orchards fared well. But it will likely be next year before producers truly know the extent of any tree damage suffered during Winter Storm Uri.

“The extent of tree tissue injury is the only unknown,” Stein said. “Will those injuries be significant? When the heat sets in, will they still be able to transfer moisture? If not, we could see some more dead trees, but I think most trees that made it through the freeze and set fruit are showing signs that they are OK.”

Stein said the Texas peach crop continues to progress and that producers are expecting a good year. Availability should be good, but demand and prices are expected to be higher than normal.

“The peach crop looks amazingly good,” he said. “There were some fruit set losses on trees with actively growing buds, but trees with tight buds came through the cold fine and are progressing nicely. Producers should do well because demand will be very high, and consumers should expect good, quality fruit.”

Some early fruiting varieties in South Texas and varieties grown in high tunnel houses in the Hill Country are ripening and should be available soon, Stein said.

He said trees were behind on chill hours due to warmer than normal temperatures prior to the winter storm, but that the cold and cooler temperatures since provided orchards more than enough to trigger good blooms. Good, cold winters tend to push better blooms and fruit sets, but the best chill hours occur between 32 degrees and 45 degrees.

If anything, he said, producers’ thinning efforts will factor heavily in the yield and quality of individual orchards.

“The only challenge this year might be adequate thinning to get proper fruit size,” Stein said. “There is a fine balance that producers must find that will allow trees to produce that marketable-sized peach, but still maintain a good yield.”

Thinning fruit set is also critical to a tree’s long-term production cycle, Stein said. Leaving heavy fruit loads on trees can stress them, which sets them up for a poor performance next year or makes them susceptible to diseases like canker.

“Over-thinning is better than under-thinning,” he said. “It can be a gamble because you never know what weather will do, but it’s better for fruit quality in the near-term and for the tree in the long-term.”

Stein said peaches aren’t the only Texas fruit crop expected to experience a bumper year. Blackberries appear to have exceptional fruit sets this year, and some areas in South Texas are already harvesting some varieties.

Blackberries have always been a popular supplemental crop for peach growers, but new thornless varieties are making the fruit a considerable crop, especially for “pick-your-own” orchards, Stein said. Selecting the right variety for individual locations and having enough water to allow fruit set to make plump berries are all that growers need most years for success with them.

“Most peach people have small patches of blackberries scattered throughout their orchards,” he said. “The acres aren’t high, but these newer varieties coming out may change the game.”