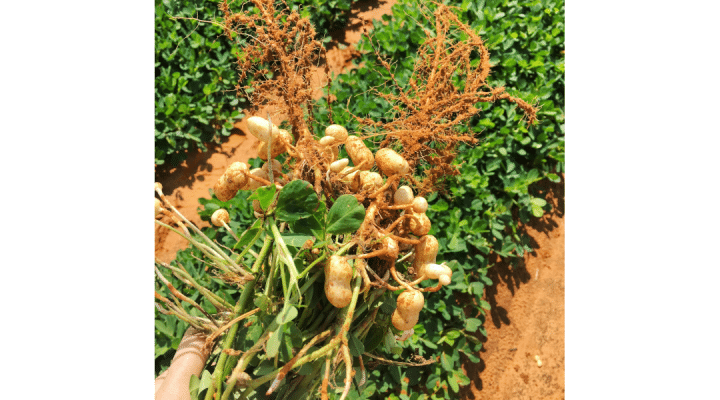 Yields were expected to be below average, but prices were stronger this season. Peanuts were impacted by drought and heat much like most crops across the state, said Emi Kimura, Ph.D., AgriLife Extension state peanut specialist, Vernon.

Some fields that received around-the-clock irrigation looked good, but will likely produce below-average yields, while others with limited water capacity failed or were expecting very poor yields, she said.

Aside from the drought, Kimura said producers faced few issues. Pest, disease and weed pressure were below average due to the arid conditions, though weeds were becoming an issue in some fields following widespread rainfall.

“The peanut season started off dry, hot and windy, and those conditions were consistent until late-August,” she said. “It has been a tough season.”

The latest Farm Service Agency report estimates around 19,784 acres failed. Fields that survived the drought were not progressing properly under difficult conditions.

Kimura said peanut pods were not filling properly and some were empty, which will mean reduced yields. When peanuts grow under normal conditions, pegs, or smaller branch-like stems, sprout from the stem as plants search for nutrients and moisture in the soil. Clusters of pods form along those pegs.

But under such dry conditions, Kimura said plants do not have enough water to produce enough pods that could produce peanuts. Heat also factors into the way plants mature. Peanut plants slow their growth when temperatures are above 95 degrees because of reduction in photosynthesis rates.

Digging typically begins around the end of September. But the slow progress as plants tried to survive the harsh summer conditions means harvest could be delayed by a week or two, she said.

“It’s always good to check the pods maturity to see how close they are,” she said. “Some are waiting a few weeks later to check samples, but they need to check more carefully because the variability is so wide depending on water availability.”

Most Texas peanut acres are grown based on contracts before planting. The contracts provide shellers an availability estimate and help producers lock in buyers and prices they can make management decisions around.

Francisco Abello, AgriLife Extension economist, Vernon, said peanut prices this year were stronger than 2021. Prices depend on many factors within each contract, including variety grown and timing of the agreement, but Abello said the likely contract price range was between $600-$625 per ton on average.

Abello estimated Texas producer yields would be 42% below 2021. Last year was a good production year for peanuts, and yields were around 3,600 pounds per acre compared to the 2,200 pounds per acre expected this season.

Texas grows all market types of peanuts, including runners, Virginia, Valencia and Spanish, Kimura said. Runners are mostly utilized in peanut butter, while Virginia peanuts are primarily sold as a snack variety because of their size. Spanish peanuts are smaller with a red skin and are used in confections, candy and peanut butter. Valencia peanuts have three or more kernels per shell, have a sweeter taste and are good for boiling or all-natural peanut butter.

Georgia ranks first in peanut production, growing about 50% of the nation’s crop annually while Texas ranks No. 4 with around 9% of the U.S. output.

Abello said the rest of the peanut-producing states were expecting above-average yields but planted fewer acres. The result is expected to be an 8.4%, or a 2.925-million-ton reduction, in production compared to last year.

Market factors are still unclear regarding 2023 peanut contracts, but ending stocks were expected to be 11% lower than last year, around 919,000 tons, and exports to China were expected to be lower as well. Commodity prices for corn and cotton are also likely to compete for acres.

Kimura said Texas peanut growers are hoping to avoid any late-season issues. In 2020, an early freeze in mid-October damaged some fields. Rain can be an issue after peanuts are dug and are drying down in windrows. Peanuts need four to five days of dry, sunny weather to dry.

“Fields just need enough time to mature properly, and the weather to cooperate with harvest at this point,” she said. “It was a rough season for all crops here in Texas, and we just have to hope for a better season next year.”

Weslaco woman charged with felony for theft of livestock