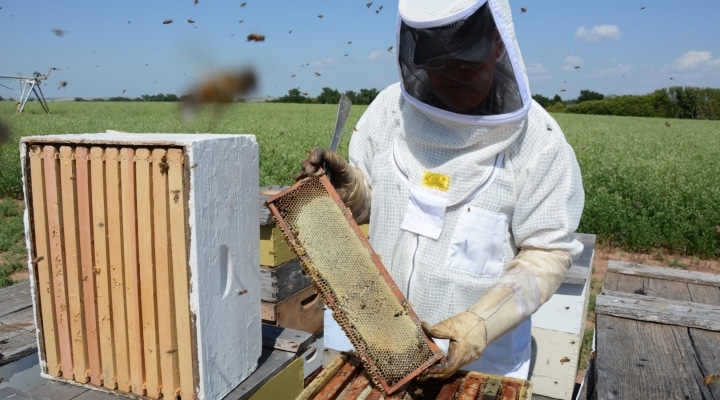 A beekeeper tends to one of 68 bee colonies staged for honey production and pollination near a 90-acre field of Silver River Sweetclover being grown for seed production. (Texas A&M AgriLife Extension Service photo by Adam Russell)

COLLEGE STATION, Texas — Texas remained sixth in the nation for honey production in 2019, and is home to thousands of overwintering hives that contribute to the nation’s agricultural economy each growing season, according to Texas A&M AgriLife Research and Texas A&M AgriLife Extension Service experts.

Hobbyists are backyard beekeepers who keep bees, typically less than 10 hives, to meet Texas’ agriculture exemption for property taxes and/or to produce honey for their household, to share and/or sell locally. Sideliners typically have 50-250 hives but also maintain a full-time job.

“The plight of the honeybee and beekeeping to protect populations is a part of the increasing trend of hobbyist beekeepers,” Keck said. “But around 75% of the residents who participate in our Beekeeping 101 course are doing it to get that ag exemption with the bonus being honey for themselves and to share with family and friends and maybe sell at local farmers markets.”

Commercial beekeepers are those who keep 500 colonies or more. Their livelihood depends on bee husbandry and by moving large numbers of hives around the state and nation to pollinate crops and/or produce honey.

In Texas for instance, a commercial beekeeper may deliver hives in the Rio Grande Valley to pollinate watermelon fields and move those same hives to the Texas Plains to pollinate cotton later in the growing season. Then in the summer they may move their colonies to South Dakota or North Dakota for clover honey production.

Honey production and home base

Juliana Rangel, Ph.D, AgriLife Research honey bee scientist in the Department of Entomology, Bryan-College Station, said Texas is home to many beekeepers because they hold bees here in winter and then take them to other states for pollination services in February and throughout the year.

Rangel said as Texas is not among the states that require apiary permitting or registration, it is difficult to keep an accurate tally of beehives, activities like queen and bee sales and honey production.

Even though the top honey-producing states are North Dakota and South Dakota, California, Florida and Minnesota, Rangel said thousands of those hives are based, or at least overwinter, in Texas as the state offers a mild winter climate for bees.

“A lot of these major producers who provide pollinator services and produce honey have a residence in Texas, but travel throughout the year before returning their bees to the state in preparation for winter,” she said.

Honey production requires nectar sources from wildflowers like bluebonnets, Indian paintbrush and almond verbena, Keck said. East Texas’ climate provides the best conditions for a long honey “flow” that typically starts in February or March and can continue until the end of the year, depending on temperatures.

“Honey bees produce throughout Texas, but there’s less production in West Texas because it’s dry and there’s fewer nectar sources,” she said. “Central Texas typically gets a sizeable flow in the spring and a tiny one in the fall. Freezes in the Panhandle limit production there, but there’s also an abundance of agricultural settings that they benefit.”

“Nectar harvest in Texas is short but abundant and spikes in mid-to-late spring. By early summer there’s not much, but then there’s a fall bloom that produces some honey as well,” she said. “During summer and after that bloom, those honey-producing hives are fed sugar syrup.”

Rangel and Keck said interest in honeybees and beekeeping is on the rise, but that the number of active beekeepers in Texas is difficult to nail down. Rangel believes the number of hobbyists likely stays steady due to attrition and addition each year. Keck said participation in AgriLife Extension’s Beekeeping 101 program, which is designed for beginners, suggests beekeeping is on the rise, especially in South and Central Texas.

“The number is at least staying steady,” Rangel said. “The problem when you’re a beginner is that you may be discouraged by a colony’s death in winter and wash out within three years, but you have new hobbyists starting. And over the last 10 years, because of pollinator awareness, the numbers have definitely gone up.”

Rangel said controlling Varroa mites is the biggest challenge for beekeepers. This pest can introduce dozens of viral pathogens that cause colonies to collapse if untreated.

In Texas, Rangel said there are fewer crops that require foliar pesticide applications, which are detrimental to honeybee populations. The landscape is also populated with diverse plants that pollinators, including native bees and honeybees, can feed from year-round.

But urbanization is impacting that landscape, she said.

“People should be aware of the importance of pollinators,” Rangel said. “Bees provide pollination services that represent over $16 billion to the U.S. economy every year, and one-third of the food we eat is pollinated by honey bees. They just need to be aware that avoiding harsh chemicals to control weeds and planting pollinator-friendly areas on their properties can go a long way in protecting pollinators, including the honey bee.”

Agriculture is no stranger to technology