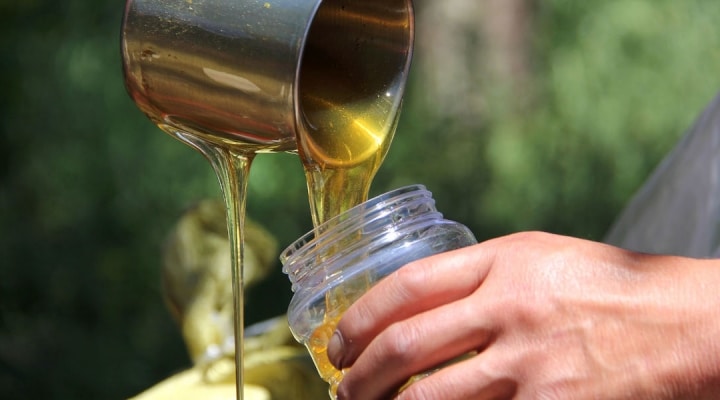 Honey production in Texas was lower than last year, but interest in beekeeping continues to grow. (Texas A&M AgriLife photo by Laura McKenzie)

Keck said the combination of stressful conditions occurred at a critical time for overwintering bee colonies.

“The winter storm caused delayed wildflower bloom and that certainly impacted honey production,” Keck said. “It likely caused honeybee losses, especially in South Texas where bees are not acclimated to that type of freezing cold. But the lack of rain through the winter into late-April exacerbated the lack of forage availability for bees as hives became more active.”

The annual U.S. Department of Agriculture Department honey report in March showed there were 157,000 honey-producing bee colonies across the state in 2020. Texas honey contributed 8.9 million pounds with a value of $17 million to overall U.S. production, 147.5 million pounds worth more than $299 million.

Keck said the reduced production could mean higher prices for retail honey, but that local conditions and production success or failure could play into what consumers ultimately pay for locally produced honey.

Texas beekeeping falls into three categories – hobbyists, sideliners and commercial. The actual amount of localized honey production is difficult to quantify due to the number of hobbyists and sideliners who do not participate in reporting.

Hobbyists are backyard beekeepers who keep bees, typically less than 10 hives, to meet Texas’ agriculture exemption for property taxes and/or to produce honey for their household, to share and/or sell locally. Sideliners typically have 50-250 hives but also maintain a full-time job.

Commercial beekeepers keep 500 colonies or more. Their livelihood depends on bee husbandry and by moving large numbers of hives around the state and nation to pollinate crops and/or produce honey.

A commercial beekeeper in Texas, for example, may deliver hives in the Rio Grande Valley to pollinate watermelon fields and move those same hives to the Texas Plains to pollinate cotton later in the growing season. Then in the summer they may move their colonies to South Dakota or North Dakota for clover honey production.

Interest in beekeeping increased in recent years, especially due to COVID-19. Interest among hobbyists is up like most homestead-type activities, including gardening and backyard poultry production, Keck said. There is also interest in beekeeping to gain property tax exemptions for smaller parcels.

Keck said some hobbyists and sideliners were reporting better outcomes in both honey production and hive populations this season despite the drop commercial honey producers experienced. She suspects restrictions at the height of the pandemic likely gave part-time beekeepers more opportunity to give their hives attention, whereas commercial producers may have had issues with labor.

“This was my second-best honey production year to date, despite the winter storm and late bloom,” she said. “I think a lot of the results came down to local conditions — their colony health coming out of winter and any interventions beekeepers made to help their colonies along when they needed it.”

Setting up for success next honey season

Keck said beekeepers around the state should be preparing their hives for winter.

September rains and warmer weather provided a late bloom that Keck said is helping colonies in some areas of the state stock away food stores to get them through December, January and February. But beekeepers should be monitoring colonies for any supplemental needs.

Keck said it is equally important that beekeepers monitor colonies for mites and reduce any infestations prior to overwintering.

“Bees are much like livestock in that we are responsible to provide what nature is not providing,” she said. “In parts of the state, especially the southern half, flowers may be blooming into December, but most hives are closed up at Thanksgiving and not opened back up until around Valentine’s Day. It’s not too late to help make sure you have done your part to help healthy colonies emerge next spring.”