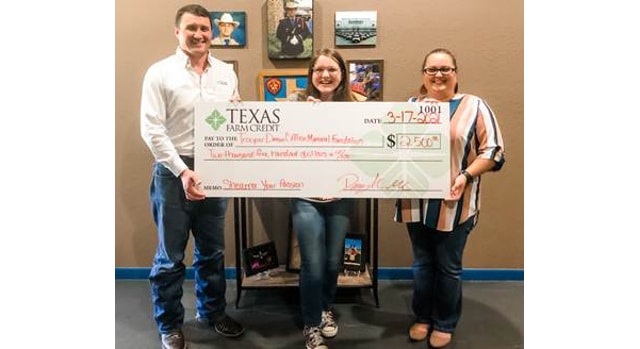 Woodall has selected Trooper Damon C. Allen Memorial Foundation, a non-profit organization established in 2019 by Kasey Pickett Allen in honor of her husband, Trooper Damon C. Allen. The foundation helps the lives of first responders by raising funds for various needs such as finances, physical, mental, or emotional assistance, or other support during or after a tragedy occurs in their lives or the lives of an immediate family member.

Woodall, the Sr. Loan Administrator at Texas Farm Credit’s Fairfield office, says that Kasey is also trying to save funds to provide a scholarship beginning next year, and their daughter Madison who received the donation on the foundation’s behalf hopes to run the foundation one day.

“Damon was gunned down during a traffic stop on Thanksgiving Day, Nov 23, 2017,” Woodall said. “Trooper Allen and his family have been friends of mine since I moved to Mexia in 2005. While I was a police officer, I had the privilege to get to know him and his family. This was a very tragic incident that shook us to our core. I am 100% positive that this donation will help them to continue to do great things in our community.”

Woodall was selected for this award by Texas Farm Credit’s Inclusion Leadership Council because of her ongoing passion and volunteer efforts within her local community. This donation is part of Texas Farm Credit’s Passion Forward initiative which aims to give back 2% of their annual net income to local agricultural and charitable organizations each year.

The Tommy Dean Shearrer Community Champion Award was created in 2018 in remembrance of Texas Farm Credit’s former customer and board member who was killed while assisting a stranded motorist in 2012. The Atascosa County farmer and rancher would often say, “We need to support the community where we live. Our community provides for us, and we should be involved in our community.” Shearrer was known for his strong sense of civic duty. He joined the FFA in high school and later advanced to FFA state vice president in 1975. He became active in the Pleasanton Chamber of Commerce and Pleasanton Cowboy Homecoming Association to help promote his hometown. An advocate of weather research and technology, he was president of the local, state, and national chapters of the Weather Modification Association. He also had been a county commissioner and was an elder at his church.

Texas Farm Credit (TFC) is an agricultural lending cooperative that provides competitive rates, flexible terms, and personal service to farmers, ranchers, rural residents, and agribusiness firms from the Red River to the Rio Grande Valley. Not only does TFC finance a wide range of farming and ranching operations, it also offers home and rural real estate mortgage loans, as well as provides a variety of insurance services to its members. Headquartered in Robstown, Texas, TFC serves 100 Texas counties and is part of the Farm Credit System, a nationwide network of rural lending co-ops established in 1916.